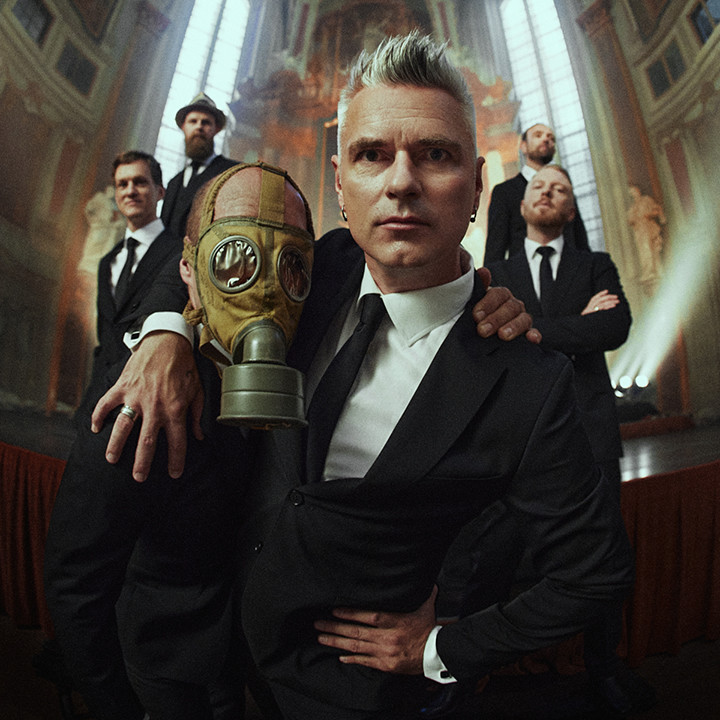 Norwegian sextet Kaizers Orchestra's infectious and theatrical alternative-rock transcends language barriers. The group is a sell-out show commodity in Scandinavia, but has also garnered a devoted audience in Europe and beyond. Despite its lyrics only being sung in Norwegian, the band's quirky, conceptually ambitious, and triumphant music -- a synthesis of Scandinavian and Eastern European folk influences turbo-charged by high-energy blues, indie, metal, and rock -- is broadly resonant. Kaizers Orchestra has earned a cult following in the U.S., amplified by its one-and-done 2013 performance at New York's Metropolitan Museum of Art which was covered as a high-profile debut by The New York Times.

That appearance was a farewell concert for the idiosyncratic indie-rock juggernaut, and Kaizers Orchestra retired at the peak of its success back home, in Europe, and while it was on the verge of a breakthrough in America. Now, 10 years later, the band has reconvened, and Kaizers Orchestra's four-month, 56 date Norwegian reunion tour has sold out in under fifteen minutes. The band is also planning worldwide tours for 2024-2025; working on a musical structured around its iconic album trilogy -- its first project in English; and Kaizer's Orchestra is excited to announce all of their albums will be re-released and remastered on vinyl, starting February 2023 through August 2023. In addition, the band has hinted at releasing some new tracks and possibly a full album down the line.

"I live my life, create my art, and perform from a true place. It's like I am standing on an oil barrel shouting a message that maybe not every person understands, but they feel the energy," notes Janove Ottesen, the group's singer and principal composer. "Sometimes you can communicate feelings without words. For example, I love French music and Latin music, and I don't speak those languages. Being authentic to my life means singing in Norwegian, but the vibe and what I am trying to communicate is universal."

Kaizers Orchestra invites comparisons to Icelandic post-rock band Sigur Rós where the music supersedes any language barrier; Nick Cave and The Bad Seeds, in terms of being a "cult band" that is also a worldwide phenom; and Radiohead where a band with uncompromising musicality can make widely appealing albums. The sextet specializes in cinematic songs that burst through genres and exude an intriguing dichotomy with a primal urgency to the hooks and the beats (oil barrels and brake drums often serve as percussion) balanced by sophisticated musicality and imaginative arrangements. Kaizers Orchestra counts as influences Quentin Tarantino, Tom Waits (Fun fact; Kaizers Orchestra is on Tom Waits' top 10 list of his favorite artists of all time -- "Thinking man's circus music. Savage rhythms, like storm trooping tarantellas. Far out."), the 1937 Disney film, Snow White and the Seven Dwarfs, British and American pop, rock, and blues.

The songs feature sweeping story arcs that include both thrilling fictionalized narratives, and intimate personal reflection. The band's name was pinched from the infamous villain Keyser Söze from the 1995 film The Usual Suspects. The idea here was to create something of a whimsically evil orchestra. "We love the possibility of this mythical and mystical character behind the scenes. The idea of this entity performing for Keyser," Janove says laughing. "And being a six-piece band of multi-instrumentalists, we felt like an orchestra. It wasn't that thought out when we named the band, though, but I notice these things in hindsight."

Rune Solheim, drums, percussion; and Øyvind Storesund, double bass, bass guitar. The band formed in 2000 while Janove was studying to be a music teacher, and literally in his class found Kaizers Orchestra's keyboardist and drummer. The two guitar players were his childhood buddies, and the band found its original bassist through a recommendation from the local music store.

Kaizers Orchestra debuted on a small stage at a Norwegian festival, and quickly attracted the interest of the audience waiting through the set changeover for the artist on the main stage. The song of resistance the band were playing at the time exploded into a sing-along as thousands of people who never heard the band joined in for the hook. That fateful moment Kaizers Orchestra realized they had something special. The guys worked non-stop for 13 years, tirelessly touring and writing sprawling conceptual music, releasing eight studio albums -- including a massive album trilogy project that spanned 5 years -- five live albums, and several EPs and video releases.

Today, Kaizers Orchestra is looking ahead with international tours, the musical, the remastered reissues, and possible new music. The guys are excited to explore what Kaizers Orchestra has to say 10 years later. "It's touching to be back together. We started this band as six young boys who were as close as brothers, and now I feel I have my family back," Janove says. "Our music has given us so many gifts. It's blessed us with houses and wonderful lives, and we are very grateful. We appreciate our success and lives more than ever!"