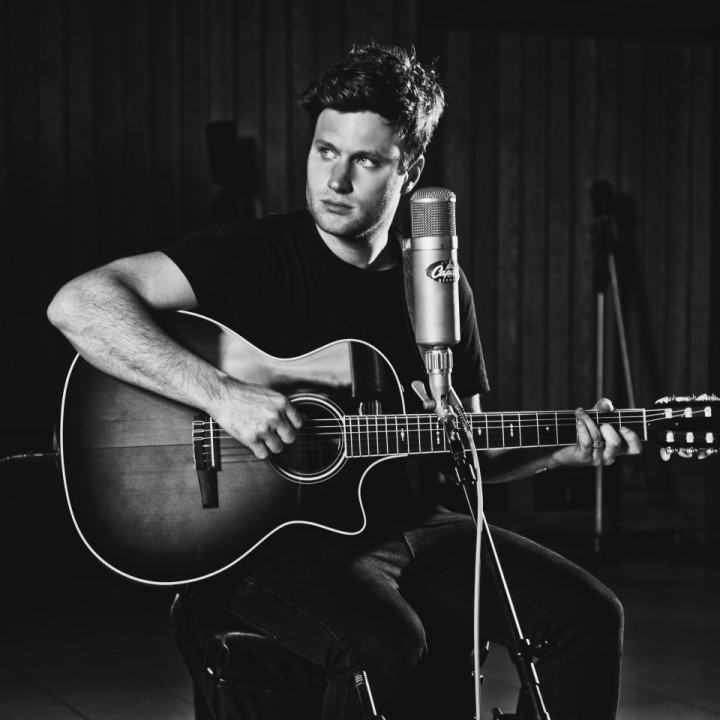 Over the last half-decade -- in between writing and producing for hitmakers like One Direction and making waves with his Northern soul/indie-pop project Graffiti6 -- singer/songwriter Jamie Scott began working on a batch of intensely personal songs sparked by his recently becoming a father and husband. Now with his new solo record "My Hurricane," Scott has pieced those songs together to create an album that's unabashedly emotional but gracefully sophisticated in both its lush and lovely, '70s-folk-rock-influenced sound and intimate storytelling of an autographically inspired couple. "Writing this album, I got fascinated with the idea of growing old with someone and then eventually losing the person who means everything to you," says Scott, explaining that "My Hurricane" follows the fictional couple from before they meet until they die. "'Hurricane' is meant to represent that journey, and the message of it is that you've got to just go for it, live big and live brave and never get caught up in regret."

Guided by the confessional, heart-on-sleeve honesty he's cherished since falling in love with Joni Mitchell's "Blue" as a child, Scott threw himself into exploring the nature of unconditional love and all its accompanying joys, anxieties, and inevitable heartbreak in songwriting for "My Hurricane." "This is the first record I've ever made where the whole time I was thinking, 'I don't care if anyone ever even hears this, I'm just desperate to write this piece of music,'" says Scott, who composed most of the album on piano and guitar at home in England.

After writing on his own for about six years, Scott recruited his longtime collaborator and former Jamiroquai keyboardist/songwriter Toby Smith to serve as his co-producer on "My Hurricane." To keep the album's recording warm and natural, Scott also enlisted several bandmates from his early years of making music (guitarist Luke Potashnick, bassist Pete Cherry, and drummer Karl Brazil), then called on a host of guest musicians (including a string ensemble and horn section) to help create "My Hurricane"'s intricately textured sound. Also featuring a duet with critically adored Canadian singer/songwriter Ron Sexsmith, the resulting album finds Scott taking the sublime songcraft he's brought to chart-topping artists like Christina Perri and Enrique Iglesias over the years and channeling that timeless melody into his own deeply impassioned brand of rock/pop.

Beginning and ending with two distinct renditions of the same song, "My Hurricane" kicks off with the quietly devastating "Lights," a harmony-drenched a capella number that later turns up as the sweeping and epic "Heaven's Gates." All throughout the album Scott sustains that intensity while infusing each song with a gorgeously refined sound: on "The Night's Gonna Trick Me Again," for instance, he laces lilting guitar and golden harmonies through his story of a heartbroken man who can only revisit his lost love in dreams ("The night's gonna tear my soul/'Cause only in the night we get to grow old"), while the dreamy pedal steel and sultry piano of "Ebony Eyes" nearly hide the loneliness in its own aching lyrics. The stunning piano ballad "Carry You Home," meanwhile, serves as "My Hurricane"'s centerpiece and elegantly showcases Scott's sweet but soulful vocals, a masterful delivery that's matched even on breezier tracks like "Bloodstains and Movies" (Scott's lullaby-like duet with Ron Sexsmith). On the showstopping "Unbreakable," choir-like harmonies and tender strings blend with Scott's stirring vocals to capture the song's heart-melting promise of redemptive love ("Can't walk away till your heart knows that it's beautiful/I hope it knows it's beautiful"). And with the soaring lead single "My Hurricane," Scott offers up an all-out, devil-may-care love song that perfectly embodies the album's irrepressible and infectious sprit.

To delve into the many emotional dimensions of the story at "My Hurricane"'s heart, Scott draws from such genres as soul, British folk, classic pop, and country-rock while mining longtime inspirations like Carole King, Paul Simon, Cat Stevens, and Joni Mitchell. "My influences have pretty much remained the same since I was about fifteen," says Scott, who dropped out of school at 17 after realizing he spent all his class time "staring out the window and daydreaming about Joni Mitchell off in Laurel Canyon." Self-taught on piano and guitar (which he began playing at age 7), Scott landed his first publishing deal when he was 20, then quickly scored a record deal with an imprint of Sony Music. After putting out his solo debut "Park Bench Theories" under the name Jamie Scott and The Town in 2007 -- as well as performing with artists like Alicia Keys, Ryan Adams, and Kelly Clarkson -- he joined forces with fellow British songwriter/producer/multi-instrumentalist Tommy Danvers (aka TommyD). Naming their collaboration Graffiti6, Scott and Danvers released their much-acclaimed album "Colours" in 2010 and found fast success when their songs appeared on such shows as "Grey's Anatomy" and "CSI: NY." To further broaden his career, Scott also began penning songs for One Direction (including the double-platinum 2013 single "Story of My Life," along with a dozen other tracks), Nicole Scherzinger, Christina Perri, and Enrique Iglesias, as well as working with Michael Kiwanuka (a British soul singer discovered by Scott and often compared to legends like Curtis Mayfield and Van Morrison by critics).

No matter whether he's writing for himself or for another artist, Scott says his best work is born from simply sitting down at his piano or guitar and playing around with different ideas. "When you scale everything back like that, you know right away if you've got something good," he explains. "You play it and it either sounds amazing or it doesn't, and that's all there is to it." In making "My Hurricane," Scott adds, his lack of agenda in that creative exploration allowed him to push deeper into his songwriting and plumb new territory that inspired him all the more. "I didn't sit down and say, 'I'm gonna write an album called "My Hurricane," and it's going to be based on this specific concept.' I was just writing songs, and eventually the songs ended up telling me what the story was," he says. "And then when it was time to record I just called up these guys I'd played with for years, who I knew would get exactly what I wanted to do. It came out sounding 100 percent like what I hoped it would, and it's turned out to be the purest record that I ever could have made."