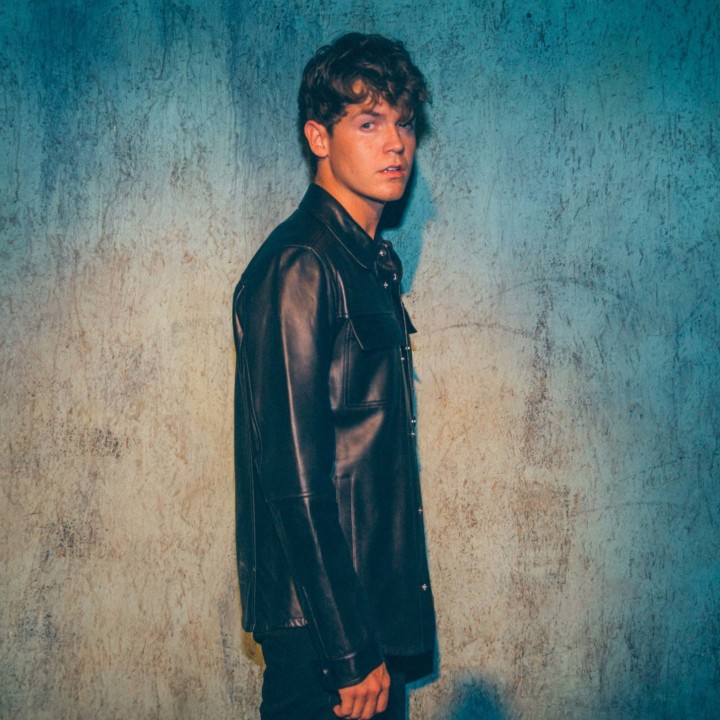 Just over five years ago, Jamie Miller was holding down a job at a call center in his hometown and secretly harboring dreams of making his name as a pop artist. Since first introducing the world to his phenomenal vocal talents, the Wales-born singer/songwriter has achieved meteoric success -- including over 550 million global streams and more than 210 million official YouTube views to date -- while winning the admiration of superstars like Kelly Clarkson, P!nk, Sam Smith, and Jennifer Hudson. But for the Los Angeles-based 24-year-old, one of the most monumental triumphs so far lies in the making of his breakthrough single "Here's Your Perfect": an April 2021 release that spent a staggering 13 weeks on Billboard's Global Excl. U.S. chart, surpassed 450 million global streams, earned 110 million YouTube views, and received acclaim from major outlets like Rolling Stone on the strength of Miller's fearlessly confessional songwriting and warm yet commanding vocal work.

"'Here's Your Perfect' is special to me because it's the first song I ever wrote -- I'd gotten to the point where I wanted people to know the real me instead of this idea they'd created based on songs I'd released but hadn't actually written," explains Miller, who co-penned the heart-on-sleeve ballad with hitmakers like Gian Stone (Nick Jonas, Justin Bieber, Katy Perry). "Here's Your Perfect" finds Miller looking back on a devastating breakup, delivering each soul-baring lyric with undeniable conviction. "I wrote that song after getting cheated on by an ex-girlfriend," he reveals. "I was in a really bad headspace at the time, but I somehow found a way to turn the pain into beauty."

On his debut EP Broken Memories, Miller further proves his talent for transforming heartache into songs with a profoundly uplifting power. Executive-produced by Cal Shapiro (MisterWives, Timeflies) and made with producers like Rob Grimaldi (BTS, BLACKPINK), the six-track project brings his raw outpouring to a radiant brand of soul-pop partly informed by lifelong influences like Michael Jackson and Donny Hathaway. "My EP is a story of going through hardships and beautiful moments and things I never would've expected, like falling in love with a guy for the first time in my life," says Miller. "I wanted my songs to be an honest conversation with my fans, where I'm sharing all these different things I've learned about myself over these past few years."

Along with "Here's Your Perfect," Broken Memories features hits like "I Lost Myself In Loving You," an irresistibly vulnerable track that's amassed over 30 million global streams since premiering in January. Co-written by Miller, GRAMMY nominee Jon Hume (Walk the Moon, Bebe Rexha), and Sierra Deaton (5 Seconds of Summer, gnash), the deeply intimate song sheds light on his experience navigating a toxic relationship. "I fell in love with someone so hard that I lost my sense of self," says Miller. "I wrote that song at a time when I was feeling so low, but putting it out felt like this huge weight was lifted from my shoulders."

On songs like the gloriously soaring "Last Call" -- whose premiere he celebrated with a captivating performance on "The Kelly Clarkson Show" -- Broken Memories takes listeners on a journey with different emotions highlighted in every song, maintaining a thrilling intensity. "I'm a hopeless romantic, and 'Last Call' came from thinking about people I know who have these amazing relationships and wanting that for myself," he says. "I think everybody wants to be someone's first call when it's last call at the bar, so the aim of that song was to capture that hopeful feeling." And on "It Is What It Is," Miller offers up a guitar-driven and wildly exhilarating anthem that speaks to his guiding philosophy in life. "'It is what it is' is what I tell myself anytime something doesn't go my way -- it means that whatever happens, you can get through it and move on," he says. "It was important to me to include that song on the EP and let my fans know that even when things are dark, there's always a light at the end of the tunnel."

No matter which emotional state he's embodying, Miller infuses Broken Memories with a depth of feeling that comes from a lifetime of building his one-of-a-kind vocal skills. Hailing from the city of Cardiff and raised in a working-class family (his mother's a housecleaner, his father's a taxi driver), he grew up on gospel music, Motown, and R&B and started singing in the school choir as a kid. "When I was younger, singing wasn't the coolest thing to do, and I sometimes got bullied for it," says Miller, now an ambassador for the nonprofit group Boo2Bullying. "Luckily I come from a very loving family and my mom and dad always supported me, so I never really gave myself a plan B to fall back on -- I was going to make music happen one way or another." At the age of 18, while working at the call center, he landed a spot on a major TV show in the UK -- a turn of events that massively amplified his online presence and ultimately led to his signing with an American manager and record label.

Soon after inking a management and recording contract, Miller made his debut with "City That Never Sleeps," a 2020 single praised by the likes of Billboard (who noted his "incredible vocal range and control"). Over the next two years he continued to turn heads with tracks like "Onto Something" and "Hold You 'Til We're Old," in addition to making waves with "Wishes" -- a cut from the soundtrack to the hit Korean drama series "Snowdrop" (starring Jisoo of BLACKPINK and currently airing globally on Disney+), which racked up over four million streams in less than a week. But as his profile rose in the global pop scene, Miller felt fiercely compelled to stake his claim as a songwriter. "For a long time I wasn't sure what I had to write about, since I hadn't really experienced life outside the streets I'd grown up on," he says. "But then once I allowed myself to learn more about the good and bad in life, to fall in love and get hurt and mess up a little, I felt like I finally had something to say. I put all of that into 'Here's Your Perfect,' and since then I've had so many people tell me that song has helped them come out of a really dark place. That alone is the most rewarding thing for me."

Having finished his live debut as direct support on Jesse McCartney's sold-out, 32-date tour in June 2022, Miller is determined to deepen his connection with audiences around the world. "I want to travel all over and hear my fans sing my songs back at me, and be one of those artists who people can grow with as they get older," he says. "Most of all I want people to hear my music and realize that regardless of where you come from, you can do whatever you set your mind to. No one probably ever saw this in the cards for me, so now I just want to let everyone know that you can stay real and genuine and still make your dreams come true." In July 2022, Miller announced that he will be returning to tour most of the USA and for the first time, Canada, as direct support for Calum Scott on his 25-date, North American tour.