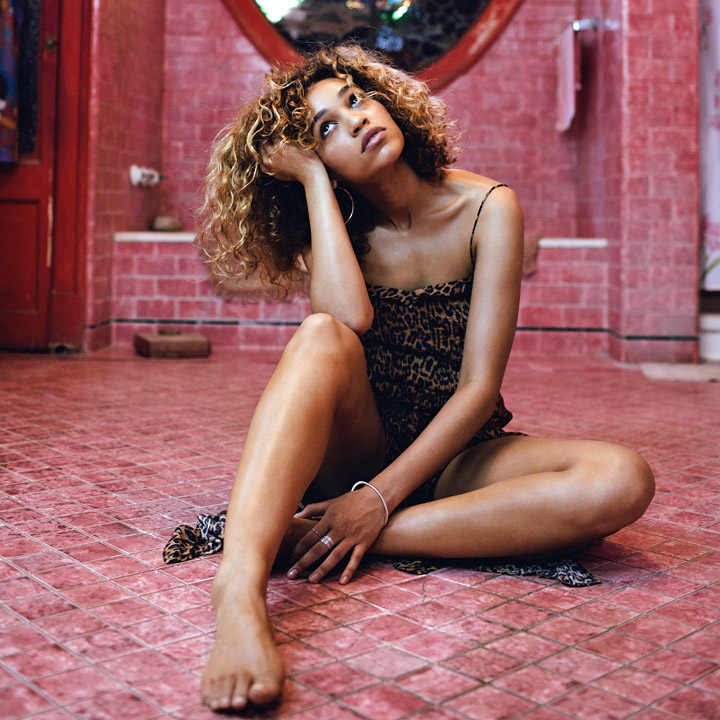 If you see Izzy Bizu whizzing passed you on her Penny board, her Yorkie Poo dog Teddy for company, know that south London’s skateboarding soulstress is no one trick poppin’ pony. There’s layer to this. Whether Izzy Bizu is annihilating you at table tennis, kicking dust in your face at table football, or out styling you, you’ll still like her and that never-fading smile.

A fan of jazz-fusion mixes and a lover of squat parties and warehouse raves, there’s never a dull day musically either. Not one to box herself in, she’s wise beyond her 22-years, a sentiment that reigns in both her songwriting, vocal and performance, and Izzy is just as likely to be jamming to The Black Keys, The Antlers, Grammatic or C2C as she is drawing influence from Amy Winehouse, Diana Ross and Sam Cook. Indeed anyone who sees Izzy live - having sold out two UK tours, with her biggest show headlining KOKO this September - will know she’s studied the greats, and has every intention of standing with them as she releases her debut album A Moment Of Madness.

Being this year’s Brits Critics Choice finalist and chosen as the voice of the 2016 Euros with her cover of Edith Piaf’s La Foule, the South London born singer and songwriter is quickly proving herself as one of the most exciting breakthrough British artists of the year. Garnering early support from 1Xtra and BBC Radio 1 on her independent six-tracker, Coolbeanz EP, since signing to Sony there’s been plenty a new fan in the front row thanks to instant classics like ‘White Tiger’, now with over 27 Million Spotify streams, the heart-wrenching ‘Mad Behaviour’, and viral Honne collaboration ‘Someone That Loves You’. Drawing on her time moving countries, schools and the relationships that have entailed, Izzy is a cultural explorer, memories, experience and feelings evoking the songs we’re soon to hear and the thought-provoking conversation she already provides. Wearing her thoughts on her sleeve, you’ll be pushed to find many a debut this honest.

Born to an Ethiopian mother and English father, who met on a charity walk, it was his career in civil engineering that saw Izzy and her older brother living in the Middle-East for four years, spending their free days playing rugby and cricket, with frequent visits to her mother’s homeland, “I’m really familiar with the culture, it’s changed so much over the years. It’s a lot better than it used to be. Everyone thinks it’s poverty land but it’s so much more. It is truly amazing”. The family settled in South London, where they still call home.

Izzy flirted with dreams of musical grandeur during a brief stint at Stamford boarding school, where a teacher – on overhearing Izzy singing in her room – invited her to perform a rendition of ‘Amazing Grace’. But it was on joining Ravenscout Theatre School as a teenager that her love for poetry and an academic discipline to the arts was applied. Moving onto Tech Music School at 17, and after a brief dalliance with a trio called Soundgirl (a group she founded with her friends), Izzy was discovered at an ILuvLive event, who have provided an early platform for acts including Wretch 32, Jessie J and Maverick Sabre among many others. With nothing to lose she rocked up and hit the open mic session, winning the crown and plaudits from the audience who happened to include Naughty Boy and Emeli Sande.

With guidance and some much-needed advice, the debut EP was soon to come on the ILuvLive label. Collaborative downtime with best friend Mika, a multi-instrumentalist in his own right, bore the fruits of the album. With hours spent perfecting the lyrics and melody, a roll call of some of the industry’s finest producers are responsible for sprinkling the final remnants of gold dust on what’s become A Moment of Madness. Among them sit Luke Juby (Emeli Sande), Paul Herman (Corrine Bailey Rae), Justin Broad (Raleigh Richie), Ian Barter (Amy Winehouse), Jimmy Hogarth (Sia), Adam Argyll (Olly Murs), Johnny Rockstar (Amy Winehouse) and Dan Grech (Lana Del Rey).

While an earlier version of ‘White Tiger’ appeared on her EP, it remains a highlight on the album, “that was my risk-taking track. I wrote it ages ago, I had a lot of trust issues, was sceptical, anxious… My ex-boyfriend was the white tiger who made me trust again. New relationships are like a rollercoaster; scary but fun.”

‘What Makes You Happy’ is a song about self-doubt, which Izzy says every woman can relate to, "It's about feeling insecure and seeking approval from your lover. You change different parts of yourself to be their version of perfect, because you believe what makes them happy will make you happy."

‘Skinny’, an ode to the type of guy she goes for (skinny), showcases Izzy’s effortless jazz inflections licking the words with the midas touch many a vocalist strive for and never achieve. A cheeky and charming shot across the bar, sonically it’s reminiscent of a young Amy Winehouse. “When I go out I’m larger than life, I let myself go, I feel free and I don’t care who’s watching. I’m not even a good dancer but just letting go feels really good. I wanted to capture that in a track.”

With the ingredients for a long-lasting career in the mix, her greatest ambition is to perform a stadium show in Ethiopia, along with a tour of the US, Izzy would be equally happy to write with Mikky Ekko or to have a natter with Lauryn Hill over a cup of tea. “I like women who are real women, troubled souls - I understand that. But equally, when I supported Sam Smith - the vocals, his heartbreak, his soul, the energy, it was so inspiring. Being able to get on stage and lay yourself out so openly, ultimately that’s what I’m ready for.”