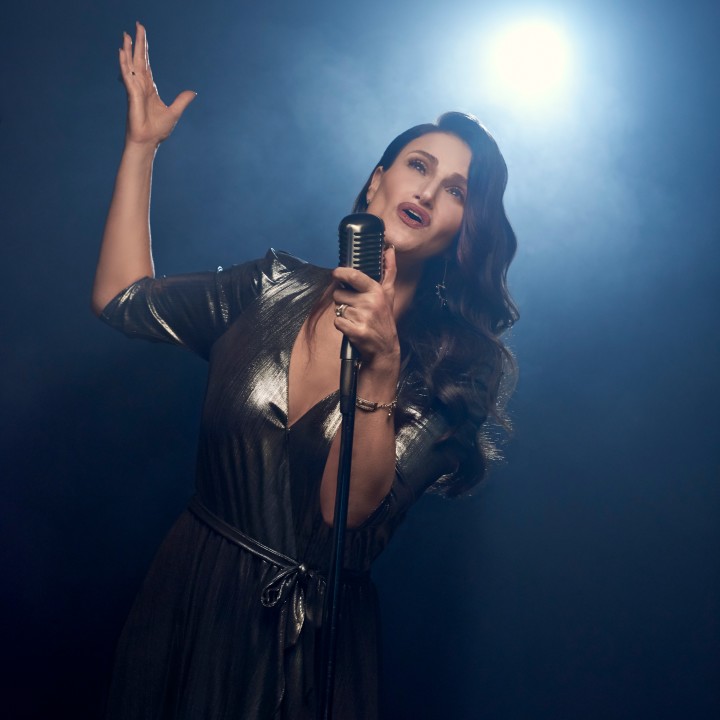 Idina Menzel is a powerhouse multi-hyphenate: a singer, an actress in film and TV, a songwriter, a Broadway star, and a philanthropist.

She rose to fame for her role as Maureen in the popular Broadway musical Rent, and her career took off when she won a Tony Award for her role as Elphaba, the Wicked Witch of the West, in the smash musical Wicked. Her voice can be heard as Elsa in Disney's Oscar® winning Frozen, the second highest grossing animated films of all time, with more than $1.2 billion in worldwide box office revenue. The film's song "Let It Go," voiced by Menzel, became an instant international phenomenon, winning the Oscar® for Best Original Song -- where Menzel performed it at the ceremony -- and the Grammy® Award for Best Song Written for Visual Media. The track reached #5 on the Billboard Hot 100, making Menzel the first artist with both a Billboard Top 10 hit and a Tony Award for acting.

Menzel returned to her starring role as Jodi in the West Coast premiere of Joshua Harmon's Skintight in September 2019; the show is a follow up to the off-Broadway performance that opened to rave reviews at Roundabout Theatre Company. The fall also saw her reprise her leading role as Elsa in the highly anticipated release of Disney's Frozen 2, which broke records to become the highest grossing animated movie of all time, as well as join Adam Sandler in the Safdie Brothers' critically acclaimed and Film Independent Spirit Award-winning A24 film Uncut Gems. Menzel was most recently seen in Amazon Studios' smash hit Cinderella, for which she wrote and sang the song "Dream Girl," which was shortlisted for the Academy Awards' Best Song category.

Menzel recently released a children's picture book alongside her sister, Cara Mentzel, called "Loud Mouse," which centers around self-acceptance and being true to yourself. This follows the launch of her QVC collection, Encore, this past Spring which was designed with the belief that "every woman deserves her own Encore.T

his Fall, Menzel can be seen in the upcoming Enchanted sequel, Enchanted 2: Disenchanted, alongside Amy Adams, Patrick Dempsey, and Susan Sarandon. Later this year, Menzel's documentary "Which Way to the Stage?," which follows her along her journey to headline Madison Square Garden, will be released on Disney +.

A skillful songwriter, Menzel's prolific recording career includes multiple cast albums and the solo albums: Still I Can't Be Still, Here, I Stand, idina, and her latest album, Christmas: A Season of Love, which was released October 2019 via Schoolboy Records/Decca Records, US. Produced by veteran A&R legend Ron Fair (Christina Aguilera, Mary J. Blige, The Pussycat Dolls, Keyshia Cole, Vanessa Carlton, Fantasia), the album features Ariana Grande, Billy Porter, Josh Gad and Idina's husband, Aaron Lohr. Christmas: A Season of Love is the second holiday album from Menzel, following her October 2014 release of Holiday Wishes, which debuted at #1 on Billboard's Holiday Albums chart and gave Menzel a Top 10 album on the Billboard Top 200 Album Chart. Her third studio LP of original songs, idina, landed in the Top 30 on Billboard's Top 200 charts upon its release in 2016. Menzel received the Breakthrough Artist of the Year Award at Billboard's annual Women in Music event in 2014 and performed the National Anthem at Super Bowl XLIX.

In January 2017, Menzel was seen in Lifetime's remake of Beaches, in which she portrays the role of CC, made famous by Bette Midler. Her other film credits include Disney's Enchanted, opposite Susan Sarandon, Patrick Dempsey and Amy Adams; Maureen in Chris Columbus' film version of Rent and Robert Towne's Ask the Dust, opposite Salma Hayek and Colin Farrell. On television, Menzel appeared in the recurring role of Shelby Corcoran, Rachel's biological mother, on Fox's Glee.

Menzel was previously seen on Broadway in the original production If/Then, for which she earned her third Tony nomination. If/Then played at the Richard Rodgers Theatre through March 2015, which was followed by a nationwide tour with Menzel and several cast members. Menzel also appeared as Sheila in the Encores! production of Hair and starred as Amneris in Broadway's Aida. In London, she premiered the Broadway hit Wicked in the West End and received the Theatregoers Choice Award for Best Actress in a Musical. She also starred in Michael John LaChiusa's musical, See What I Wanna See, directed by Ted Sperling at The Public Theater. Other Off-Broadway credits include the pre-Broadway production of Rent and The Vagina Monologues.

Menzel is consistently lauded for her strong yet emotional live performances. Accompanied by world-renowned symphony orchestras, Menzel has played to sold-out audiences and demonstrated why she is one of the great performers of her time. The Denver Post dubbed her "The Streisand of her generation," while The New York Times praised Menzel as "an entertainer with a phenomenal voice... Diana Ross with ten times the stamina and lung power." In March 2012, Menzel released a CD and DVD entitled Idina Menzel Live: Barefoot at the Symphony, a live concert with an orchestra led by legendary composer/conductor Marvin Hamlisch, filmed at The Royal Conservatory's Koerner Hall in Toronto, Canada. The concert also aired nationally on PBS stations. Her highly successful international concert tour has also included sold-out performances at Carnegie Hall & Radio City Music Hall, and a New Year's Eve 2012 performance at the Walt Disney Concert Hall.

Philanthropy is also important to Menzel, who co-founded the A BroaderWay Foundation in 2010. The organization is dedicated to offering girls from underserved communities an outlet for self-expression and creativity through arts-centered programs. The emphasis is on building self-esteem, developing leadership qualities and striving for personal and social achievement. In 2014, Menzel was recognized as one of Variety's Power of Women honorees for her work with the organization.