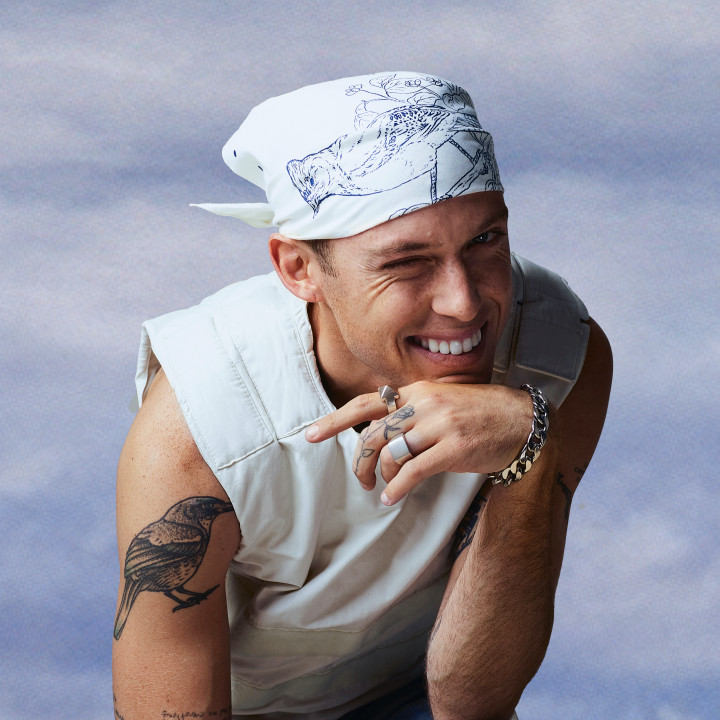 Harry Hudson is no stranger to defying expectations. The singer-songwriter and fast-emerging pop star embodies an unwavering self-assurance and wisdom well beyond his years. After surviving a battle with cancer, Harry has channeled his emotional roller coaster into supremely visceral and boundary-shattering pop music. Lately, Harry's been thinking a lot about the man in the mirror as he continues on his path of self-reflection and healing with newfound confidence and maturity. On Harry's 2020 sophomore album, Hey, I'm Here For You (MSFTS/Roc Nation), he explores the importance of learning to be there for himself in order to be there for others.

"I feel like I am becoming the man I have always wanted to be. When you look in the mirror, the first thing you want to do is judge yourself, but you have to figure out how to love the soul within. That is growth and maturity. If you can be proud of the man in the mirror, you can accomplish things you never thought you could. We are all a vehicle and we have to take care of ourselves so that we can keep moving forward and help others. My last album was about losing myself in the dark in order to find myself in the light. I was still figuring out who I wanted to become and what life had ahead for me. My new music is more about learning to love and accept myself. It's my therapy session."

On "Give Up On Us," his powerful delivery shines between falsetto harmonies and confessional choruses. VMan dubbed it a "must-listen," while Justin Bieber discussed the tune on Instagram with Harry and Zane Lowe touted it on Apple Music's Beats 1. Underscored by shimmering piano, he duets with Astrid S on "Closing Doors," which details a situation of bad timing. "Cut Me Down" explodes into a soulful scream over the screech of guitars. "This song acknowledges that I've been numbing the pain and that I'm aware that it's time to just let go and feel something," admits Harry.

Hey, I'm Here For You follows Harry's stunning 2018 debut album Yesterday's Tomorrow Night, a highly personal, soul-infected batch of pop music which racked up more than 35 million streams and featured single "Yellow Lights" which reached the Top 10 on Spotify's U.S. Viral Chart. In addition to the album, which was released via a joint partnership between Roc Nation and his and close friends Willow and Jaden Smith's MSFTS Music, Harry also released the short film Can Cowboys Cry, featuring nostalgic, western themes as a homage to his father who passed away earlier that year.

A creative soul and global citizen, Harry is fast becoming one of the music industry's most intriguing voices. Using his own life experience to help other young people, Harry is an ambassador for Teen Cancer America, an organization that works to improve the experience, outcomes, and survival of teens and young adults with cancer by providing facilities and programs designed especially for them in hospitals throughout the USA. Harry is leading the charge on an initiative to build a new teen cancer treatment facility at Vanderbilt University Medical Center in Nashville, set to open later this year. Additionally, Harry is preparing to establish his own charity called Hey, I'm Here For You.