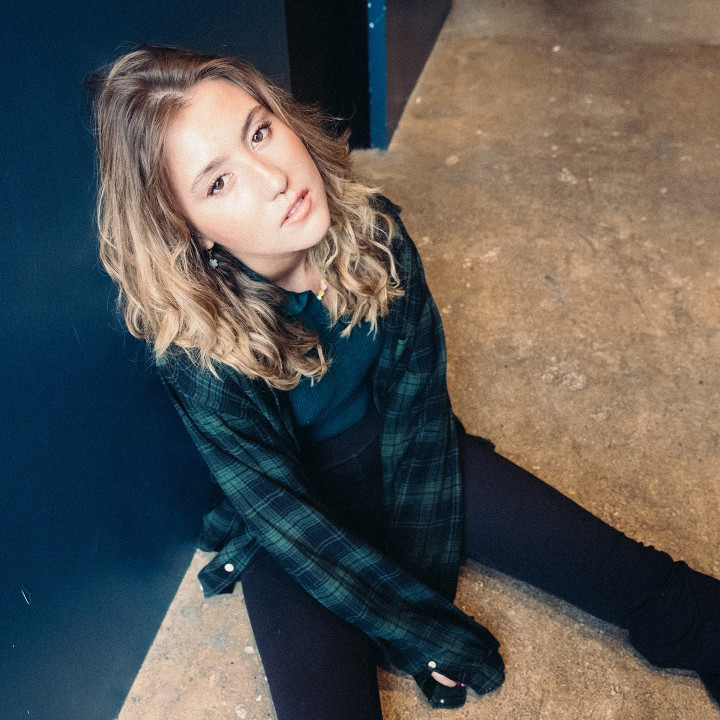 "I see the project as green. Green with envy."

Angst, anger, upset and envy run through Hannah's work as big feelings. Cursing the loss of youth and unfulfilled promises of the teenage dream -- Hell Is A Teenage Girl rips the head off pop culture's favourite lies with a cross-genre sharp bite. Mourning the school years she never got to love, Hannah Grae presents a Gen-Z take on the best of times and the worst of times, finding her voice within the death knell of generational expectations.

Sung a million ways by a million voices, stories of tainted youth, isolation and toxic friendships are nothing new in music but there's something fresh here. Sending bulletins from the aftershocks, Hannah writes from the source of those feelings. Unlike the tracks she held close to through years of bullying and isolation, Hell Is A Teenage Girl isn't the hindsight of a star comfortable in their mansion sending tips on how to get through. Instead, the project exists as an exorcism of upset and anger, created mere months after escaping it all and directly during the process of untying its effects from her identity.

Walking into the first session only a month after leaving school, it's no wonder that 'Well I Hope Ur Happy' was written on day one. With the whole project hitting tape swiftly after, these words were fresh, building over years and now finally gaining a vehicle to be vocalised.

But the sound of anger was a hard thing to come by in the happy refuge of her childhood bedroom. Growing up in the mining town of Port Talbot, Wales -- the soundtrack of home was theatrical and fun. From her mum's favourite musical theatre scores to a firm rotation of Taylor Swift albums and Disney Channel tracks, music was tied into escapism before she even knew it. "Honestly, I didn't really know artists existed. There weren't any gigs around me so I just thought music was something out of the Hannah Montana movie." Believing music to only be something out of fiction, it makes sense that Hannah embedded herself in it, learning guitar and piano on an evening to drown out upsetting days. Merging the dramatic storytelling and sound of musical theatre and Queen, with the grungier sound of Radiohead and classic rock playing in her Dad's car -- all these conflicting influences slowly shaped a sound more interesting and textured than the sum of its parts.

"When I was at school there wasn't any music that talked about how I felt. There weren't really any girls making angry music and I think having that outlet would've helped a lot," she says, talking about her acoustic origins. Starting a YouTube channel during lockdown to act more as a showreel for drama school applications than anything else, Hannah's unsuspectingly strong vocals quickly gained a cult following. Captivating over 150k people with her rewrites of popular songs and covers posted from her garden shed, her style slowly emerged. Mixing rich, theatrical vocals with rawness and emotion, her first original songs brimmed with potential, merging the storytelling of Broadway big leagues and the conviction of early Sinead O'Connor.

She didn't get into drama schools, rejected for her apparent 'insufficient storytelling' and the untrained voice that had so many hooked into her channel -- "It was fate, a week later I was in a writing session."

"It's a blessing really; it gives me free rein in writing my own music. You can convey more emotion when you're not trained, there are no rules to be controlled by, everything can be feeling."

Spending months between Port Talbot and a spare bedroom in a Battersea recording studio, the Hell Is A Teenage Girl sessions were a crash course in rock, rage and healing. Working with Rob Brinkmann, her co-writer and producer raised on a diet of My Chemical Romance and Green Day, a whole new world of possibility was opened. "I knew I had more to say with my music than I had the capabilities to do at home on my own. I needed it to come through the instruments, not just the lyrics -- there's only so much anger you can get through with words in a notepad." Giving Hannah a sonic vehicle for her anger, creating a playground to smash the bottled-up feelings inside, her discovery of 00s emo sounds, pop punk and 90s grunge opened up a door to a place where anger could be seen and heard. No longer pushing it down and silencing her upset, the studio with all its space to scream, hit cymbals and rage saw the feelings finally overflow. And from the relentless, attention-demanding guitar of the opener 'Time Of Your Life,' the outpouring never stops.

With the space and sound, the world of the project grew daily. Mapping out the plot on a giant whiteboard, Hell Is A Teenage Girl is a vast, sprawling story weaving from grand, universal feelings of angst and disillusion into something deeply autobiographical; "It's about a girl in the naïve time of school when it's supposed to be the worst and the best time of her life, and all the darkness and then growth as she gets out." That growth came in the studio, slowly moving through the motions of all the leftover feelings of high school into something vulnerable; "making music is therapy, especially when you're writing with someone else, and after I'd opened up I just wanted to write something honest." As the last song written for the project, 'Jaded' holds that final exhale for Hannah, the final statement in a long process of escape after finding an output for the anger and returning to softness with a new foundation of power. Singing "I'm glad we drifted away from each other," she made it out.

"You never really leave school," Hannah concludes with the wisdom of someone far older. Alongside her personal experiences, Hell Is A Teenage Girl speaks to universal issues of womanhood far beyond the young years. From holding space for all the anxiety and fear that comes along with womanhood in the stripped-back and striking 'Beneath Your Jeans' to tackling damaging beauty standards head-on in the Paramore-fuelled 'Propaganda,' her lens is cast far wider than high school. All carried by a distinct sound, merging nostalgic elements of No Doubt, Alanis Morrisette, The Bangles and Tori Amos, with modern storytelling lyrics inspired by playlists full of Phoebe Bridgers, Lorde and Anna Calvi -- Hannah's self-taught musical education seats her firmly in the lineage of cross-genre women making musical waves.

"Pop-punk has always had a quite masculine perspective and with female voices, it's hard to do it in a way that's expressive while still being supportive of women. My experiences weren't that at all. The idea of girls supporting girls was so alien to me in school, but it was important for my voice now to be empowering and hopeful." That's why the phrase "hell is a teenage girl," borrowed from Jennifer's Body, became so central and vital, not only as an expression of her experience but now as a mantra of power and rage to hold and reclaim.

"My school experience was one of me being up against a lot of people. I had to back down a lot and never really felt like I could stand up for myself. When I left, I knew I wanted to do something solely for myself. And this project is definitely that, it's me sticking up for myself."

Sending bulletins from the aftershocks of her school years, Hell Is A Teenage Girl exists as an exorcism of upset and anger, created mere months after Hannah Grae escaped it all. Merging the comforting childhood sounds of musical theatre scores and Taylor Swift's storytelling with a lineage of emotive, rage-fuelled female voices from Alanis Morrisette to Wolf Alice's Ellie Rowsell -- the result is a cross-genre bite ripping the head off pop culture lies. Turning the studio into a playground and gaining a new education in pop punk and 90s grunge away from the softer soundtrack of her Port Talbot home, the Hell Is a Teenage Girl sessions gave Hannah a vehicle to finally vocalise years of bottled-up feelings.

Grounded in experience, the project is personally healing and universally cathartic, charged with generational outpourings of frustration and fear. But for Hannah, it was a statement of strength; "My school experience was one of me being up against a lot of people. I had to back down a lot and never really felt like I could stand up for myself. When I left, I knew I wanted to do something solely for myself. And this project is definitely that, it's me sticking up for myself."