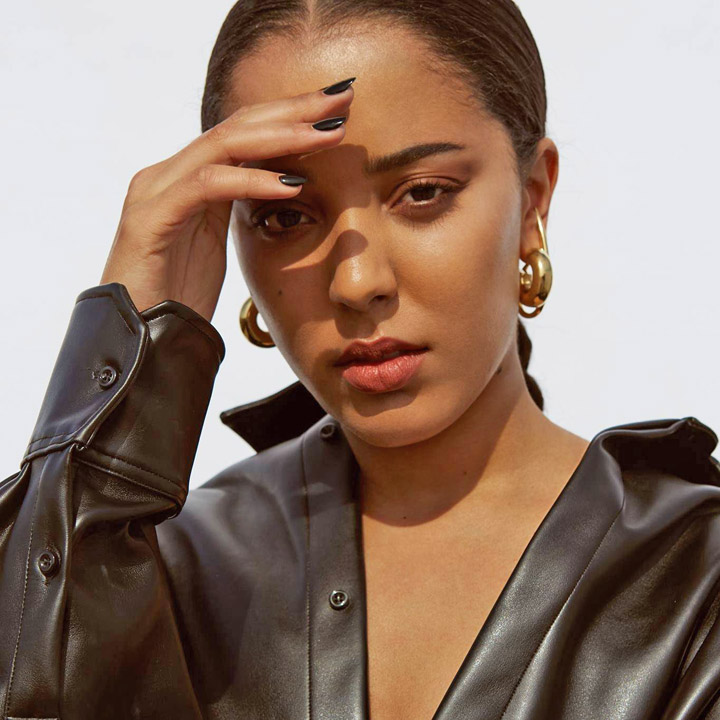 "My songs are saying all those things I couldn't say; all the thoughts that have been building up inside me"

"A lot of the music my mum played was very heartfelt and emotional" says Grace Carter. "That's why I was such a deep kid. She would play 'The Very Best of Nina Simone,' in the car and she just used to put that on and we would sing it together." Grace is describing how the social soundtrack of her home -- and car journeys -- with her mum which would form the basis for the music she would later make as an artist. For Grace, it was here she would first fall in love with emotive vocals and unfiltered confessionals.

Grace grew up in North West London in Kensal Rise before moving to Brighton when she was nine. She took her formative musical inspirations to school, performing odes to Nina Simone's 'Feeling Good' at primary school live auditions, but it was the later ballads of female singer songwriters like Alicia Keys and Adele that made her want to sing out her experiences. "I was singing along to them at the top of my lungs before I really knew what they meant!" she laughs.

After moving to the predominantly white area of Hove, it was the feeling of alienation and disorientation thanks to her unconventional family set up -- a single mum, a foster sister and absent father -- that started to shape her. Grappling with her own mixed-race identity and the abandonment from her father drove Grace to write out all the things she couldn't say out loud, where she retreated to the safe space of her bedroom.

Outside her room, her musical education came via a local gospel church choir in her school, which she attended twice a week. ("Me and my mum joined it and two days a week we could go there and I'd rehearse with all my friends that I'd made and we'd learn about harmonies and all of that stuff and I absolutely loved it.") But it was a challenge from her step dad who gave her first guitar, tasking her with making a song in a week that really made her inner artist come to life. "It was an acoustic guitar and he got it from like the Sue Ryder charity for like £20" she says. "He was a musician, is a musician, and gave me a guitar and said 'you have so many things that you've never said that frustrate you and anger you that you need to get out, so take this guitar and write a song for me in a week.' I only knew three chords but I couldn't stop writing songs after that."

She eventually learned more than her three chords and her first songs she says, were a product of teenage frustrations, written in her diary, just for herself, with titles like 'Blank White Page.' These confessionals, sang in front of her computer, were about the anger she felt towards her absent father. For fun, she would upload covers to YouTube of Rihanna, Katy Perry and Leonard Cohen's Hallelujah ("it was what everyone did at that time!") recorded in her room. While her peers were "smoking in the park" Grace was taking solitary time, learning rudimentary productions skills using Logik, and singing into webcams.

"I literally didn't go out. My friends would be smoking and drinking in the park and I'd just go home and sing" she recalls. "I was going through my old laptop the other day and there was like 500 videos; I would record every song I wrote on photobooth on my computer and I would sit in my room with my headphones on and my keyboard on my bed eating Fizzy Fangs I got from Sainsburys and play these songs. They were so bad but they became songs in the end."

Grace found her independent musical moment via journeys from her bedroom in Hove to the bedrooms of her friends, producers 'The 23rd' in Streatham where she would record music before they got a studio in Brixton. She released a 4-track debut EP featuring 'Half of You,' and 'Saving Grace' a track dedicated to the women in her life.

The result of these years spent living independently was, finding her voice between homes, which allowed her to reflect on what she was trying to say. She puts it simply: "My music is saying all those things I couldn't say; all the thoughts that have been building up inside me."

The building and bubbling comes out in smooth, heartfelt pop-soul that channels the power of Emeli Sande and productions of Kendrick Lamar. She talks about the impact of Kanye West's productions which saved her forthcoming album from being a collection of solely ballads: "My publisher sat me down and asked me how I wanted it to sound...and he played me '808s and Heartbreaks' by Kanye and I loved it; it was so simple and so amazing and I can't even explain, it was like yeah ok, that's how to do emotion." She laughs. "From that day, every song has had beeps on it!" (Incidentally, Kanye collaborator Mike Dean enjoys a producer credit on the album). She discusses how important agency is over her work, from writing, to vocals to the production details. "I have total say in how I sound" she says, "I sit in the seat and say yes or no. I produced when I was younger, so I have a good understanding and can explain what I want to hear."

Her recent live shows have connected with audiences -- and artists. After hearing her, she was invited to tour with HAIM, Mabel, and upped the scale as support for Dua Lipa's UK and European tour, performing to 5000 people and sold out Brixton Academy shows. Discussing it, it still makes her giggle. "I didn't expect anything and I would go out and sing a ballad and everyone would shine their torches on their phone and I'd see the young girls crying at the front. They really connected, and that's really what the music is supposed to do." Ahead of her debut album offering next year, is her upcoming tour, and it's here that Grace is stepping out, inviting the world to hear her outside of crowds of people. "I want my music to connect with people in their rooms, inter cars -- this album is me saying, you know what you're feeling? I've felt it too. Here's how it sounded."

The delicate power of Grace's music transmits the message of sonic power and vulnerability loud and clear. Recorded over two years, her album sampler has notes of sensual, upbeat soul thanks to production from the 23rd, and modern thrilling toplines, courtesy of Toronto producer Koz, who has previously worked with Drake DVSN outfit and Kendrick Lamar and pianist Mike Kentish, who she says encouraged her to sit down and creatively respond to her own outpouring by writing everything she was feeling straight into the page, for them to piece together later. "I'm a deep soul" she sighs. "I've always been someone who really thinks about things and enjoyed my own company. So songwriting has been a therapy to me."

The sonic result is a thrilling coming of age project that invites us into Grace's world. On the heart wrenching single 'Why Her Not Me,' atop gentle piano lines and bass claps she pleads for an answer, taking us with her as she leans into introspection and takes us through her mourning coming out of the other side of hard lessons learned. It sees her huskily imploring someone for closure, through soft heartache and velvety fury as she meditates on loss. Discussing it, she explains that it was written amid heartbreak. ("Two weeks before I had found out I had this brother and this sister and that he had had a wife before I was born and that he was still with and I was piecing it all together in my head and I was full of anger but this was the moment I exploded").