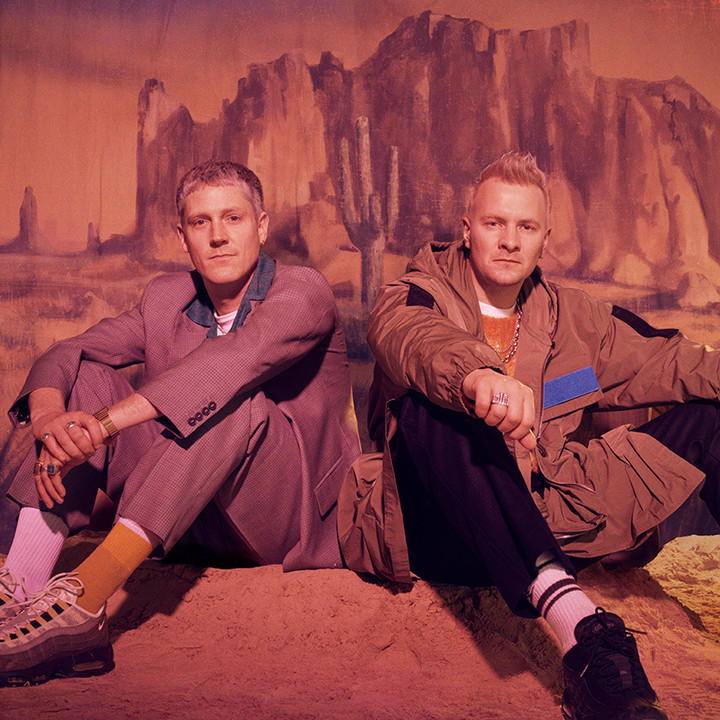 It took the London band Franc Moody some time to perfect the ideal clap sound. They tried clapping their hands, then they tried numerous people clapping their hands. But after much experimentation, they discovered that the most pristine clap sound comes, yes, when you record three pairs of hands clapping in which one pair is wearing marigolds. This isn't abnormal behaviour for Franc Moody. Listen to their songs and you'll hear salt shakers and mugs, dripping radiators, the sound of someone zipping their flies, and their own family playing strings. It's this kind of DIY sound design and attention to detail that has made the new London duo such a curious and captivating proposition.

Franc Moody's sound is contemporary funk, awash with electronic inspiration, human touches, and throbbing grooves. Like Daft Punk and Jamiroquai before them, they draw from the sounds, styles and techniques of funk, disco and soul while simultaneously threading in electronic influences of the here and now. And over their short lifespan as a band they've shown a masterful knack for creating rich and textured bangers, like "Dopamine" (which has amassed over 2 million streams) and "Dance Moves" (over 1 million streams). Their hypnotic and free-form live show has garnered a cult following, and they'll be playing their biggest one to date this April in London's 1100 capacity 'Heaven' as well as a 7 date tour including iconic Leeds venue Belgrave Music Hall and a trip to Dublin.

Franc Moody see themselves as a collective, and have countless members once you include the musicians, guest vocalists, producers and animators that all play a part. But at the core of the band are the two ringleaders and songwriters: Ned and Jon. While Jon was born into a family of classical musicians and grew up on oboes, cellos and violins, Ned was musically educated by the stereo in his parents car, blasting old soul, 50s/60s New Orleans music, and the rock n roll sounds of Chuck Berry, Little Richard and Eddie Cochran. "I loved the melody and the groove of that music, but I think really I loved the energy of it as well," explains Ned.

The pair first met when they were part of a group of bands and musicians who took over an abandoned warehouse in North London back in 2014. "It was called the Arch," explains Jon. "When we moved in, it was bare bones concrete walls. A horrible place basically. We built these two analogue recording studios. There were old microphones, hammered organs, and beaten up guitar amps. It was quite craggy."

The warehouse soon became a staple of the local area thanks to the raucous live shows they put on that lasted well into the night and beyond, packed with hundreds of party-goers crammed in like sardines as sweat dripped from the ceiling. The kind of parties where there's no bouncer, one portaloo, and the live bands going on at 3am. This was the environment in which Ned and Jon cut their teeth as live musicians.

"We learned to love performing music that made people dance," explains Ned, "in the same

way those old funk and soul artists used to. In fact, what we were doing at the warehouse

was sort of in a similar tradition to the Zydeco sessions and crawfish boils around South Louisiana, purely focused around dancing. It was quite simple really."

Franc Moody began properly when the pair moved out of the Arch and began to focus on creating a project that married their influences. No longer living in the warehouse, they struggled to find a space big enough to fit a drum kit in. Instead, they started programming drums, and a natural electronic aesthetic began to permeate their more time-honored influences. When they went to Glastonbury each summer, they'd find themselves spending as much time watching Floating Points as George Clinton. By June 2016 they were releasing their first self titled EP, a collection of Giorgio Moroder-esque instrumentals.

The first Franc Moody track in which all of their disparate ideas, influences, techniques and approaches really united on was "Dopamine," which dropped in early 2017. Feeling inspired after a Prince binge, and with Ned stepping up to add vocals, the pair crafted a stunning slice of experimental disco madness. It had the four to the floor dance beat and the funky bass line, but it also had a disco tinged string section and even some oboe. Clash Magazine called it "a saucy piece of Prince inspired disco...."

In 2018, "Dopamine" was included on their breakthrough EP, Dance Moves. The EP was a frenetic journey through shimmering intergalactic funk and undulating bass n' drum grooves that was as hypnotic as it was arresting. On Spotify, it has amassed over 4 million streams across the eight songs. One of the lead tracks, "Super Star Struck" also saw them commission their first video. In a short animated film by Crack Stevens and Mason London, the female protagonist of the songs is reimagined as an unlikely old lady superhero (based on Crack Steven's aunt) spreading joy across the planet. In their follow up single, "Pheremones," the same video team got together to create a prequel in which the superhero visits an underwater Atlantis.

A fair chunk of Franc Moody's success has come thanks to the forest blaze of praise that comes from their mesmerising live shows. As a duo who came up via the warehouse rave scene, they feel their most comfortable when they are onstage, surrounded by the incredible musicians and friends they feel lucky to call their band, causing a crowd of hundreds to explode with ecstasy. It's a vibe they carry with them, whether they are supporting Friendly Fires on their UK tour or rocking out to thousands at Lovebox.