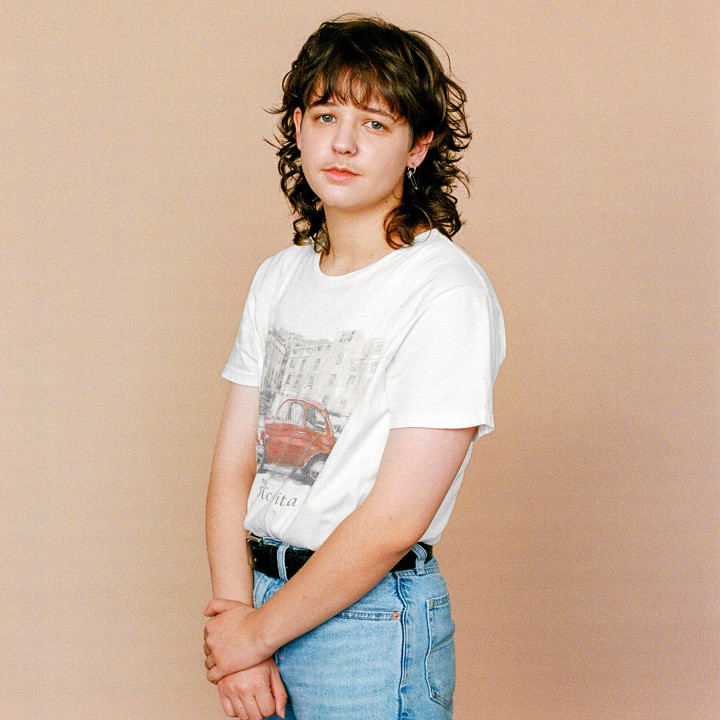 "I need to confront the conniving voices that circle throughout my head. They tell me I can't say what I'm about to say. So I know what I have to do, and that's to shout from the rooftops of every hardship I've ever had to climb."

Confessional and clear-minded, flowerkid has always drawn on his most intimate observations to craft music well beyond his years. Whether the voice memo melodies he'd record as a teenager or the tracks that fill his soaring debut EP Everyone Has A Breaking Point, this has long been the sound of necessity.

From verse to chorus, there's a distinct sense that his words needed to get out -- scrawled in a stack of beaten-up notebooks, across keyboards or hastily recorded into his phone. For flowerkid, the moniker of now 20-year-old Flynn Sant, his writing is the kind that bubbles up and spills over. Always unflinchingly candid, each line represents catharsis for musician and audience alike.

Growing up in western Sydney, Flynn first fell into music after his aunt gifted him an old Yamaha keyboard. It revealed a natural obsession as he quickly began teaching himself to write and produce fledgling tracks while hidden away in his teen bedroom.

Released when he was just 16, his debut 'Late Night Therapy' was just that -- an opportunity to process his own emotions. "I really didn't know that I was capable of expressing my thoughts in that way. It was all very new to me and I thought, 'This is perfect. It feels so good to be able to do this.'"

Gradually coming to understand that he was trans, in the midst of Catholic school and a breakup with his first love, Flynn leaned into songwriting above all out of his need to vent. The overwhelming response to the song proved that Flynn wasn't alone in that respect. Relatable and raw, his trademark generosity as an artist saw him start to amass a following that has only grown in dedication over the ensuing years.

Flowerkid maintained that bare-souled approach with 'boy with the winfields and the wild heart' in 2019, reflecting on family trauma with acute sadness and warm understanding in equal measure. Beyond its glowing reviews and multi-million streams, Flynn was struck by the number of listeners the world over who reached out to share their own experiences of loss.

It was the same level of uncompromising vulnerability that drew fans to his next release. A searing critique of the dark cruelties of men, 'miss andry' brought confronting complexity to the realm of the humble pop track. "The song roots from a distrust for men that developed from such a young age," explains Flynn. "It isn't your typical man hatred. I had to tackle the feeling of hating these boys and men that have been in my life so much. Why do I envy them, though?" The release was again met with international praise, championed by the likes of triple j, BBC Radio 1, Billboard, The Guardian and NME.

I 2021, flowerkid returned with a revelatory debut EP that's the natural culmination of his years of introspection and art-making. "[It's] been everything I have thought about for a very long time. This body of work is a feeling that has been bottled up inside me for all of my existence on this earth."

With the lead singles 'It's Happening Again feat. KUČKA' and 'Vodka Orange Juice,' we find flowerkid in typical form -- deftly pivoting between genres and frames of mind in the pursuit of healing. Brittle one moment and bitter the next, Flynn is anything but timid as he leads the listener through the pain and the beauty of his coming of age. Written in one sitting from inside a caravan parked by the coastline, "Vodka Orange Juice" sifts through the emotional toll of justifying one's transness to those too threatened by what they can't understand. By the time he first got to the final chorus, Flynn was in tears. "It was hugely cathartic writing this song," he reveals, "I hope when other people are listening to this, they feel the same way. If you feel like you aren't accepted for who you are, please know that you are loved." Flynn felt a similar kinship when working with like-minded LA-based artist KUČKA. Paired with a pulsing, neon-soaked video, their stunning collaboration has already garnered richly deserved acclaim from triple j, BBC Radio 1 and Apple Music's Zane Lowe.

Using a voice that remains both timeless and unmistakably of the now, Flynn has here reached the apex of his creative approach thus far. Though always conceived from his personal experiences, his songs manage to hum with universal relevance. It's the kind of music that by sharing, encourages you to share -- to consider your own life and concealed pain. It also offers to do that alongside you, guiding you through with tender confidence. Like an outstretched arm or a knowing glance, Everyone Has A Breaking Point is pop at its most empathetic.

"I want us to lose ourselves hand in hand," Flynn explains, "on this ethereal and spiritual musical journey I created for us. Please listen and watch as my internal and external struggles flourish into bloom. I can't wait for you to hear this excerpt of my heart and soul."