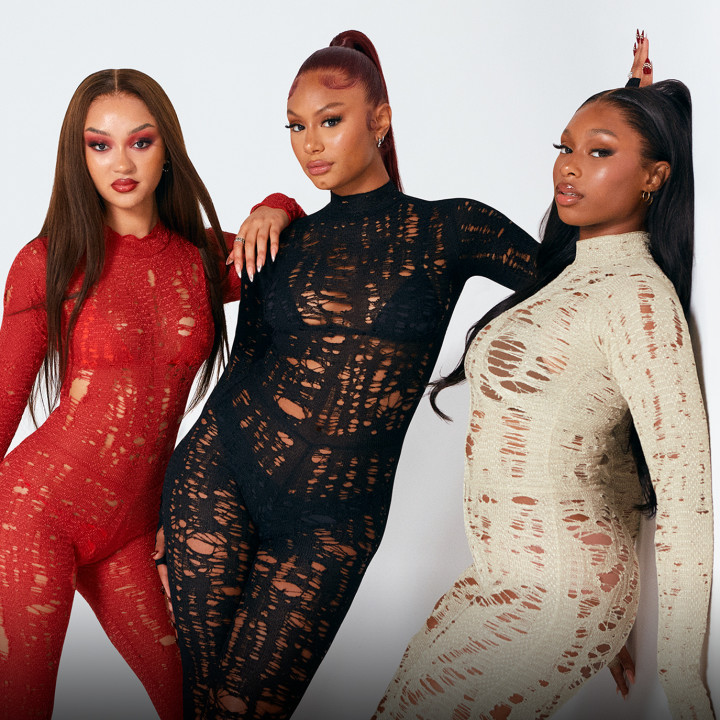 You want a sign of FLO's stratospheric trajectory? Since the release of the British girl group's debut single "Cardboard Box" in March 2022, FLO have made history by becoming the first group to ever win Radio 1's BBC Sound of 2023 and the BRIT Rising Star Award 2023. Having been the first group to ever win the BRIT Rising Star, FLO now follow in the footsteps of global superstars including Adele, Sam Smith and Celeste who all started their career with both accolades. Believing in their "vision from day one," FLO have become the most hotly tipped British music act of the year, nominated for Best Newcomer at the MOBOs where they made their sublime debut UK TV Awards performance, as well as winning cult platform No Signal's Yearbook Top Of The Class accolade, breaking records with thousands of votes.

Not only that, but January 2023 started with the release of the "Hide & Seek Remix," a collaboration with Britain's biggest rapper Stormzy for his #1 album, after he tweeted "ready when you are girls" following a Capital XTRA video of the group speaking about their dream UK collaboration. Stormzy sent a video message to FLO about the collaboration and also told Stella, Renée and Jorja the incredible news that they had won the BBC Sound Of 2023.

Not only is Stormzy is a fan of the UK's most exciting new girl group, but R&B and hip-hop luminaries such as Brandy, JoJo, SZA, Victoria Monét and Missy Elliott, as well as girl group royalty -- none other than Destiny's Child's Kelly Rowland and Sugababes -- have all co-signed FLO, helping "Cardboard Box" become the biggest girl group opening statement in over a decade, with 40m global streams, and their debut EP The Lead has reached 100M streams to date. But at the heart of FLO are three ambitious young black women -- 20-year-old Renée and 21-year-olds Jorja and Stella -- whose immaculate three part harmonies, contemporary take on '00s R&B and era-defining music videos have connected with hundreds of thousands of R&B fans globally.

From TLC's "No Scrubs" to Jazmine Sullivan's "Pick Up Your Feelings" via Destiny's Child's "Say My Name," R&B is littered with tart kiss-offs to downbeat exes. With FLO's extraordinary debut single, London-based girl group FLO have taken their rightful place in that lineage. "Imma put your shit in a cardboard box," they harmonise angelically over a typically delicious MNEK production that fuses early '00s R&B with low slung dancehall flavours. "Never liked your momma so I guess she's blocked," they continue, reducing a cheating no-mark to tears as they pack his "jeans next to the dreams you sold me." Ouch. It remains a startling introduction to a band whose ethos is to fuse the classic old school R&B they still obsess over -- "Mariah, Brandy, Whitney, Mary, Aaliyah -- do you want me to go on?" asks Jorja rhetorically -- with contemporary singers like the aforementioned Sullivan, as well as H.E.R, Frank Ocean and SZA.

Following the success of "Cardboard Box," which also includes being playlisted on BBC 1Xtra, a nomination for the Popjustice Twenty Quid Music Prize, and winning Spotify's fan-voted Who We Be "Song of the Summer" (beating off stiff competition from Burna Boy and Drake), FLO gave their legions of new fans a sublime 5-track EP straight off the bat and leading the way, with The Lead. Featuring the sleek, Timbaland-esque banger "Immature," with an exquisite video that has amassed over 1.3m views and an incredible stripped back session for VEVO DSCVR reaching 400k, to the scorching carefree anthem "Summertime," about the romance of female friendship. The official video for "Summertime," which was their "favourite yet," serves as more evidence of FLO's magnetic chemistry and unbreakable bond. The Lead won critical praise across the board, hailed by the likes of The Guardian, i-D, Dazed and Pitchfork ("worthy heirs to the millennium girl group legacy"), a nomination for "Female Artist Of The Year" at the GRM Daily Rated Awards 2022, alongside Little Simz, Mahalia and Cleo Sol, as well as being nominated for "Best New Artist of 2022' at the inaugural GUAP Gala. "There hasn't been a girl group in the market for so long, especially an R&B girl group," says Renée.

"We're young, we're from the UK, and everyone is looking for something new, and we dropped 'Cardboard Box' at the perfect time." FLO's fusion of the old and new also feels fresh, taking the best bits of R&B's experimental phase and grounding it with UK swagger. "I feel like people want this kind of R&B at the moment," offers Stella. "What we do has a perfect balance of both US and UK influence." Dropping the darkly swirling, speaker-rattling, "Not My Job," which rails against a useless no-mark and features one of the year's most immaculate choruses, FLO gave a world-class performance for VEVO DSCVR, leading to an online conversation with fans stating they hadn't seen a group's bond so strong in decades. It's no wonder FLO sold out their debut London show at The Outernet and New Century in Manchester in record time -- just under 2 minutes -- following a sublime performance at fellow R&B star Mahalia's club night. FLO also made a surprise appearance at PinkPantheress' Boiler Room last year, personally invited by the BBC Sound Of 2022 winner. And just before they capped 2022, FLO wanted to thank fans for their unparalleled support with R&B slow jam "Losing You," inspired by R&B greats including Brandy and Destiny's Child as they flip the narrative on a classic love song, showing three friends taking the world by storm.

FLO's origin story is the perfect mix of fate and good fortune, and speaks to their name -- it flowed. Stella spent the first few years of her life in Mozambique before moving to the UK aged 5 and met Renée at school in London, where they realised their joint love of singing and were familiar with Jorja via social media. Jorja was born in Germany but grew up in Hertfordshire and was on her own journey with music. "I was really shy so I wasn't telling people I could sing," she explains. "I avoided all of that. But it's hard to hide it because you just want to sing all the time." An appearance on CBBC talent show "Got What It Takes?" in 2017 -- where she performed a cover of MNEK's "Wrote A Song About You" -- her future producer as fate would have it -- changed everything. "It went from zero to a hundred," she smiles. "I won it and from there I started a band with two other girls who were on the show. It was fun but I don't think it was moving the way I wanted it to. It was very slow." On the lookout for her next move, Jorja Stella and Renée came into each other's lives again, locking eyes at an audition and realising their shared history, "I saw the girls and we screamed across the room. I knew from that moment we would start this journey together."

Eventually the band started forming itself, with the three girls bonding over their shared passion for old and new R&B (their first performance together was a mashup of Frank Ocean, Summer Walker and Jazmine Sullivan). "The way we came together is so natural," says Stella. "It's going to be really obvious when people see us and our dynamic and how we make music," she continues. "That dynamic is very much a sister dynamic," chips in Renée. "That's important for our fans to know." Their bond was solidified by the fact they were all raised by powerful single mothers. "So we get each other," says Jorja. "We've never had a fight. We've never had a disagreement to the point where it's not fixable." Having strong mentors has also given them a good work ethic. "Even the way we go about our careers, you have to be opinionated and go for what you really want and that's what we've had to do," says Stella. So what do their mums think of their career choice? "Our mum's are all like Kris Jenner vibes," laughs Jorja. "They love it." In fact, for Jorja, there's even some Olympic spirit mixed in, too. "My mum was an Olympic sprinter so she knows you don't have to do the usual job. You don't have to go to Uni. For her, as long as you put your all into it and you're disciplined, she doesn't mind what I do as long as I'm taking it seriously."

This ethos is the thread that runs through FLO. Having spent the previous two years honing everything from their sound to their look ("Us but elevated," as Stella succinctly puts it), they've taken their sudden success in their stride. Just about. "It's what we asked for but on steroids," laughs Stella. "We can't complain, it's exactly what we wanted." During a recent whirlwind trip to America, where they were surprised by girl band royalty Kelly Rowland in the studio ("We turned around and we were like 'oh my gosh, you are Kelly Rowland,'" splutters Jorja), they had the chance to see how far they've come. "You could feel a real shift," continues Jorja. "That's been a good thing, seeing the shift in other people's energy. We wanted people to get behind the project and believe in it. We can see that happening now."

And fans from all across the globe have got behind the project. "Cardboard Box"'s Happi Remix became the number 1 sound on TikTok UK after a Polynesian-creators dance routine went viral on the platform, leading to over 5 Billion views and 11 Million versions of the dance created. FLO have since gone on to perform the track on their first late night TV show with Jimmy Kimmel, their UK TV debut on Later.. with Jools Holland, The Glamour Women Of The Year Awards, as well as the MOBOs. "What I want from the next six months are a lot of exciting opportunities, our names in big rooms, more buzz about FLO," states Renée of future plans. Reminded of the fact that just ten months in, the band already have fan Twitter accounts, she adds: "There's already a great fanbase so we just hope it keeps growing and people sell out more of our shows." With a flurry of end of year tips and 'big in 2023' lists on the horizon, the band are keen to keep their focus "on what we know, what we do best, and hopefully that will speak for itself," adds Jorja.

That's what makes FLO so special: they know exactly who they are and what they want to do. Also, this is just the beginning. While The Lead set the scene, "Not My Job" and "Losing You" feels like yet another step up, all classic-sounding melodies, playful swagger and harmonies that live up to the band's top tier inspirations turned fans. The world is very much their oyster. "Our ambitions haven't changed," states Renée. "We want to go down in girl group history -- so you had Destiny's Child, TLC, Spice Girls, Pussycat Dolls, Little Mix and then FLO. Just to be in that conversation." It makes sense right now to just go with the FLO.