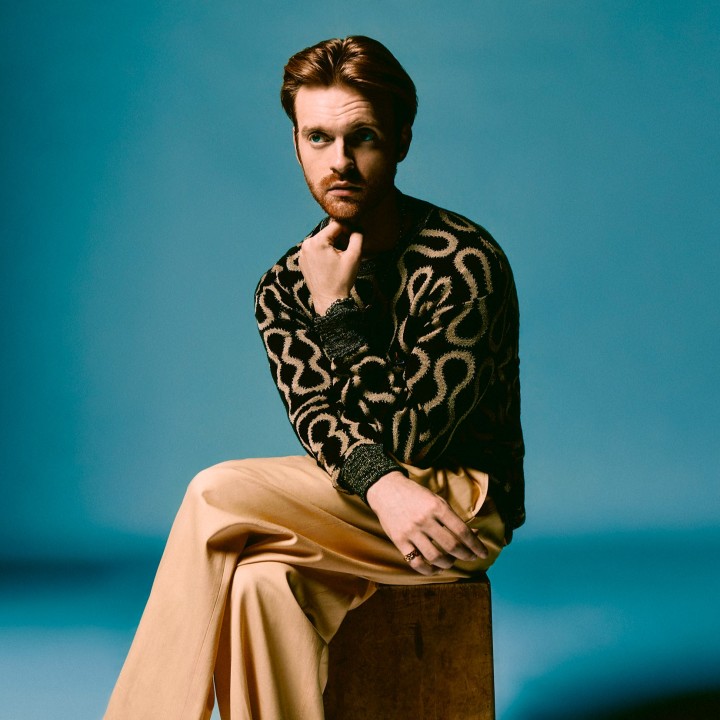 Finneas notices the little things. He was always observant though. As a kid, it wasn't out of the ordinary for him to ponder existence, worry about the end of the world, and wonder what happens when we die. He was pretty sure everybody else thought of the same things too (much to his chagrin, most grade schoolers don't). However, this self-described "existential child" grew up to become an optimistic man whose fascination with the little things only made him appreciate people and the world around him even more.

It's the kind of love you'll feel on his full-length debut album, The Optimist [OYOY/Interscope Records].

"I've always been interested in people and their idiosyncrasies," he admits. "It's hard for me not to focus on them or notice. At the end of the day, I'm just observant and optimistic."

The Los Angeles-born singer, songwriter, multi-instrumentalist, and producer fashioned a bold alternative pop sound out of those details. His 2019 debut EP, Blood Harmony, gathered over 1 billion streams and boasted the gold-certified single "Let's Fall in Love for the Night." In its wake, he graced the covers of American Songwriter, Mix Magazine, coup de main, and more in addition to appearing on The Tonight Show Starring Jimmy Fallon and Jimmy Kimmel LIVE!, to name a few. Along the way, he also produced music for Justin Bieber, Halsey, Demi Lovato, Kid Cudi, and Tove Lo and collaborated with the likes of Ashe and Ringo Starr. Not to mention, he garnered eight GRAMMY® Awards for his historic work with his sister Billie Eilish.

As the world went into Lockdown during 2020, he returned home to L.A. The shutdown afforded him the opportunity to naturally assemble what would become the album.

"In terms of the way I write music for myself, I'm fairly traditional about it," he elaborates. "I'll sit at the piano or grab a guitar and then live with what I've written for a long time. I produce it after the fact. With other artists, the process happens concurrently. The artist is sitting in the room with me, I'm making an instrumental, and we're working on lyrics and melodies together. As a producer-artist, you never give yourself enough time to work on your own music. Unfortunately, nobody is going to boss me around and tell me to produce my own album except me. In April 2021, I knuckled down and really focused on my music."

He introduced the album with the single "A Concert Six Months From Now." Acoustic guitar creaks underneath candid recollections of purchasing tickets to a Fleet Foxes show for an old flame before a gust of distortion hits like a tidal wave.

"In 2017, I had literally bought tickets to take my girlfriend to see The Fleet Foxes at the Hollywood Bowl," he recalls. "It was six months away, and I was like, 'It's really optimistic of me to think we'll still be together by then.' I happened to be right though. With all of the pessimism and negativity in 2020, I was pretty worried, but I still decided to be positive. Even if things didn't work out, I would've regretted not trying as hard as I could have."

On "The Kids Are All Dying," piano and handclaps bleed into a rush of energy as he adopts the tone of the internet on the hook, "How can you sing about love when the kids are all dying?"

"Even if we are living through a time of chaos and uncertainty, the human experience is never going to exclude love, sex, fun, leisure, and adventure," he says. "If you're in love, you're going to write a love song. It's how the brain works."

A glitchy hum buzzes underneath "The90s" as he confesses, "Sometimes I think about the 90s, I know that everyone romanticized it, but you could sign me up for a world without the internet." Elsewhere, the dreamy keys on "Love Is Pain" wrap around his heartfelt delivery of lines such as "wish it wasn't mandatory dying."

"It's about how painful and heartbreaking love is," he reveals. "I wanted to write a song about an adult relationship. The more you love someone, the more they have the capacity to cause you heartbreak."

On the other end of the spectrum, "How It Ends" rides a funky bass line and claps towards a soulful refrain. Meanwhile, "Only A Lifetime" surveys a long, strange year through a different lens.

"A lot of people were pacing around their houses, praying for lockdown to be lifted, and waiting for the vaccine," he states. "I had a sudden realization -- I might really miss this calm time I had with my parents, my girlfriend, and my sister. I was trying to remind myself to stay present and stay engaged no matter what is going on."

Ultimately, Finneas is forever an optimist.

"My hope is some kid somewhere puts this on and maybe thinks, 'This is exactly how I'm feeling right now,'" he leaves off. "That's what I do with my favorite music. Personally, the more I learn, the less I know. So, I just feel really lucky right now...and optimistic about the future."