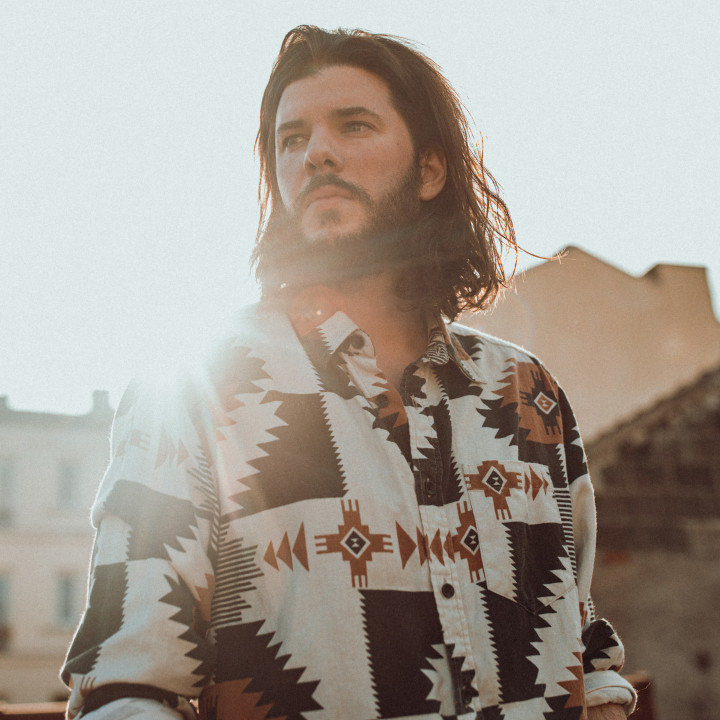 When he left the Swiss mountain canton of Vaud last year, Fakear had no idea that his musical world was about to be turned upside-down. Today, he's still the same young man he's always been, tall and slim in his trademark extra-large white T-shirts, his speech peppered with geek culture references. Yet there's a fresh, new undercurrent to his fourth LP, Everything Will Grow Again (Carrie, the first single, is released on 17 April). The album sees Fakear fusing styles with more muscle than before, ushering in hints of Mount Kimbie, Floating Points and Jon Hopkins and embracing accidental synth sound effects.

It's been six years since the worldwide success of "La Lune Rousse," his first oriental-inspired EPs released by Nowadays Records, and the halting, vibrant vocals that catapulted Fakear onto the scene. As one of the poster-boys for the French "bedroom producer" movement in a similar vein to Flume, Fakear now finds himself keeping on-stage company with giants such as M.I.A. and Bonobo. But the young man feels the road to success may well have been paved with some ill-judged shortcuts. "My last album was too poppy," he explains. "Since then, I've stopped listening to that breed of electro, which veered off into EDM, like Odesza."

Stepping out of the shadows from his home close to Lausanne, where he wrote All Glows (2018), Fakear embarked on a mission to pick up new vibes along the banks of the Canal Saint-Martin, hoping to "soak up the effervescence of city life and start partying again." His time in Paris was an invaluable creative break. "As soon as I'd unpacked my boxes, I gave myself ten days shuttered away to compose the album's outline." Up until this point, he had always written his music in fits and starts, a process he describes as "frenetic" and "disorganised" in retrospect. "This time, as soon as inspiration I struck, I took the time to break away. The entire album was produced with The Legend of Zelda on in the background to keep me focussed."

A figurine from the game sits on his desk, brushing shoulders with Star Wars paraphernalia. His passion for all things sci-fi is shared by English producer Alex Metric, who collaborated on writing Everything Will Grow Again, and with whom he enjoys genuine "personal and artistic chemistry." The star producer has worked with Daft Punk, Diplo and Avicii, and Fakear chose to hunker down with him in his London studio, known as 'the Batcave' in a reference to the super hero. "There were cables all over the place, you had to step over hardware and bang on machines to get them working. That's when I realised just how important analogue machines are." Up until then, his productions were primarily composed using pre-recorded plug-ins that he rearranged on-stage with an MPC.

The background murmurs of Jupiter-8 synths and a Matrix Brute recur over the album's eleven tracks. Fakear's long-standing communion with nature, a source of inspiration to him from the very start, are combined with his trademark acoustic chords on tracks such as "Together" and "Sekoia." An entire section of the album has a decidedly club-inspired feel ("Structurized"), opening out into a series of analogue waves of sound reminiscent of Mount Kimbie and Moderat ("Linked").

The installation he designed for his live performances combines LED lighting, machines and totems, and marks a shift away from earlier gig formats, where he had surrounded himself with musicians. In doing so, Fakear returns to a clubbier, solitary style that illustrates the crossroads feel of Everything Will Grow Again. As the title hints, the album is evocative of an almost post-apocalyptic hope, a glimmer of faith in the idea that despite suffering and circumstances, everything renews, evolves and returns to balance.

In Arabic, the word "fakir" takes its roots in philosophy and wisdom. Here in Fakear's world, time has ripened him, leaving him with a sense of not wanting to "follow trends," and borders stretch to encompass uncharted electronic territories, with this fourth album serving as a profession of faith. A more candid, sincere exploration of harmonisation, this time, with a sturdier technical weave underpinning the whole: "a real turning point" as the 28-year-old puts it. He has already started working on a follow-up, featuring a healthy splash of Floating Points vibes, and English post-dubstep producer style.