Everyone You Know Booking Info 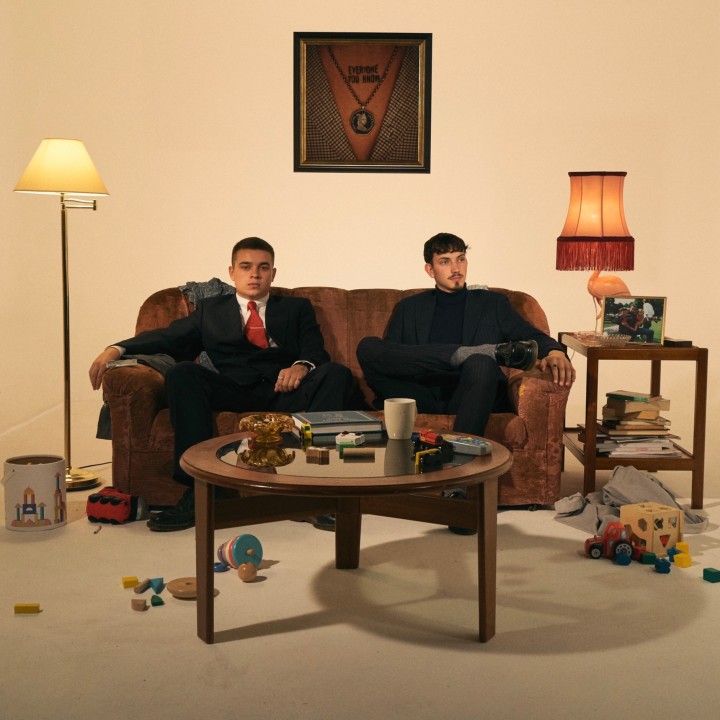 EYK are like Everyone You Know – if everyone you know has a keen ear for the vital sounds of post-millennial Britain, from The Streets to Arctic Monkeys and all hip hop points in between… and is able to mash those influences together by producing tracks in a bedroom and a garage… then top off those tracks with sharply observed lyrics and rhymes and bars about suburban heel-kicking and small-town raving… then manages to use all that to land a record deal within four weeks of putting their first tunes up on Soundcloud.

Everyone You Know are Rhys Kirkby-Cox (24, Man United through and through, a young father) and Harvey Kirkby (20, QPR (Queens Park Rangers) till I die, a young studio geek). Technically – genetically – they’re half brothers, sharing a dad but not a mum. But really – actually – they’re just brothers, best mates and simpatico songwriters who produce beats out of a bedroom (Harvey) and craft lyrics in a garage (Rhys) in satellite towns outside London, UK.

Rhys and Harvey kicked open the door in October 2018 with Cheer Up Charlie. Five banging tracks and two pithy skits, the seven-track EP showcases the brothers’ prodigious, self-taught musical talents and way with tunes that lane-hop and genre-jump with confident ease. They’re the Playlist Generation, loving this and loving that and able to channel all of it – but here blessed with an underpinning of four music-obsessed parents/step-parents with record/CD collections drawn from the best of R&B, vocal house, Britpop, east coast hip hop, rave and jungle.

“All that,” notes Rhys, “was the soundtrack of our childhoods.”

“And all this,” adds Harvey, meaning burgeoning buzz and dozens of stockpiled tunes, “is all that coming out of us.”

So Cheer Up Charlie’s turbo-charged 'Dance Like We Used To' sounds convincingly like Peak Prodigy (that’s The Fat of the Land, released when Rhys was aged one and Harv was aged minus-four). Equally, 'Father’s Temper' is Peak Massive Attack (on that one, you do the birth maths). But, brilliantly, it all sounds uniquely like Everyone You Know.

“Lyrically the song is just an observation of things we’ve noticed on nights out raving,” says Rhys of 'Dance Like We Used To', a side-eyed hymn to Rebook Classics, pre-drinks, indoor sunglasses, sovereign rings, bouncer beefs and “eight pound for a Jäger-bomb… and the DJ still hasn’t played your song”.

“It’s things we've seen our friends do and been a part of, or things we've seen strangers do. Most tunes you hear about going out at the moment are about the perfect night out: getting loads of bottles in a VIP booth, having a load of guys/girls round you, all that. This was more a real representation of a standard night out.”

As for the production – skills that were also memorably brought to bear on their recent remix of Professor Green/Rag’N’Bone Man’s 'Photographs' – Harvey adds: “I wanted to make something that was different to anything else we’d done before yet still sounded like us. At the time I was listening to a lot of acid house and hardcore as well as newer garage records. That inspired me to combine Nineties rave with modern day electronic music, which gives the track a weird, genre-bending sound.”

Then there’s the irresistible groove of 'Our Generation', which snatches a Streets title/lyric (“a grand don’t come for free”) on its way to profiling the post-millennial tension for a cohort caught between living life online and living the truth of suburban ordinariness. It’s a message that fires up the brothers.

Rhys: “I’d like to think we represent the honesty of just being an everyday human being. It’s not about the fake façade of this life you live on online, how wicked everything your life appears to other people through a screen. It’s about how normal you can be – and be proud of that.”

Harvey: “For our generation social media is such a massive thing. But especially on Instagram, all these celebrities are only posing about the new car they’ve got or the new clothes or jewellery or whatever. Where’s the negative side of things? That’s what life has. That’s normal.”

As the brothers say, their name tells it like it is: Everyone You Know are “just normal people who do normal shit”. Rhys started making music while still at school in Hampshire, using software and a laptop his uncle gave him. Then, while studying media/music/photography at college, he upped his game, honing his rap and rhyme skills. Harvey, meanwhile, had taken notice. “He’s my older brother so I obviously wanted to do what he was doing, so I got into production. I started working with a guy in the States called Fresco – we met on Soundcloud, sharing beats. That was all hip-hop stuff. Then me and Rhys were just knocking about making tunes for four for five years.”

In 2016 they went from knocking about to knocking up an EP that was stoutly homemade but already ambitious: Faces ran to 11 tracks and two skits. “The skits are an insight into our lives, how our mates are,” explains Rhys. “Old school hip hop albums had skits – The Marshall Mathers LP, Ludacris – and I still get a buzz out of those. They piece things together.”

“But musically, that was kinda early stage, urban-sounding,” adds Harvey. “We were finding our feet and our sound.”

They sent the EP to some management contacts in London, friends of the dad of one of Harvey’s school friends. Two weeks later they signed with management, who also look after UK rapper Professor Green. Two weeks after that, after one quick rehearsal-turned-showcase in Shepherd’s Bush, they were offered a record deal by RCA and not long after that signed to Kobalt (publishing).

Harvey: “We had no social following – 26 on Soundcloud, barely 800 followers on Instagram. But something clicked.”

Cheer Up Charlie, recorded in a studio in Acton with a guitarist and their imagination, was the first fruits of that deal. Now it’s followed by another seven-track EP, Look After Your Pennies, “banged out”, they cheerfully note, in only a handful of one-day sessions. The sublimely funky 'She Don’t Dance' – blessed with a soulful falsetto from Rhys – was the start-off track.

Harvey and Rhys wanted to reflect their changing lives: a new record deal, a baby daughter for Rhys. “We’d grown up a bit,” he says, “so this one was a bit more from the heart. A bit more personal.” Hence the stress and agitation of the hard-hitting 'Money'. It starts with what they describe as “a pretty nice guitar and piano sample”, before a nerve-shredding alarm goes off and the track switches up into a proper heavy, bass-driven beat. “And the vocal goes along with that,” shrugs Rhys.

“Dates for releases and things kept getting pushed back,” he adds with typical straight-talking honesty. “We thought, f*ck, we haven’t got no money now. That’s where that track came from. The only way we could lash out and express our frustration was in the music.”

“It is such an aggressive tune,” acknowledges young wonder producer Harvey. “That’s exactly what we were going through: we’d signed a record deal and thought we were gonna be sweet. It’s not all the glitz and glamour you might think it is. So the track is quite overpowering. But it needs to be.”

'The Drive' is similarly intense, its energy in part the product of its speedy conception.

Rhys: “From Harvey putting down the first bass and drums to me finishing the full vocal was not even eight hours.” Harvey: “We wanted a fifth tune for the EP. I said I wasn’t leaving my computer till I’d got it. I got it at four in the morning, sent it to Rhys, went to bed, woke up, and he’d already done the vocal and sent it back.”

Then there’s 'Wasted Love', as epic as it is catchy and featuring Rhys’s secret weapon: a sweet and soulful singing voice. The track also counts as EYK’s second collab after their Profesoor Green/Rag’N’Bone rerub: Rhys’s then-14-month-old daughter features on backing vocals.

Rhys: “With 'Wasted Love', we wanted a song like 'Our Generation' from our last EP, and something that was the opposite to 'Money'. I found this riff in my voice memos on my phone.”

Harvey: “And I worked up something that was a bit Coldplay / Starsailor.”

Rhys: “It’s all about being honest, no matter how you feel – anger, love, pressure, stress. Don’t be afraid to f*cking stick it on a bit of music. People might not like it – they might think a track like 'Money' is too aggressive. But that’s how we felt at the time.”

And there’s more, much more, where that came from. They have another “15 to 20” songs in their back pocket (“and three or four of them are total gems”), products of a ceaseless creative urge. Everyone You Know will continue to release EPs: they want to put out as much music as possible, to give “a bigger picture”.

And they’ll continue to mash up all their influences, which include but are not limited to: Fat of the Land, 2001 Dr Dre, J Dilla, Arctic Monkeys (“especially the first album”), The Streets, Lily Allen (“but only when she works with Mark Ronson”), Plan B, Biggie Smalls’ Ready To Die, Kano’s Home Sweet Home, Wu Tang Clan, Public Enemy, “and a general massive, massive mention to Nineties hip hop”.

As Rhys says: “If we were just making music that sounded like one thing, we’d be limiting ourselves, and not being true to ourself. Our goal was to tap into all of that, pick the best bits, and make our own sound.”

It’s a sound that brands have already cottoned on to. Adidas commissioned the brothers to soundtrack their most recent commercial, which featured Lionel Messi and Paul Pogba. Again, the brothers’ natural-born studio skills and up-for-it attitude came to the fore, with the track commissioned and completed in less than two weeks. Cue some nice clobber?

This is the world of Everyone You Know: straight-up, game-on, full-on, whip-smart and rave-ready. But, also, real. “You wake up feeling shit, that’s fine,” reflects Rhys as he considers what inspires him lyrically. “We all feel that. But it’s just not put out there for the world to see. There’s a lyric on 'Our Generation': ‘memory stored on an iPhone folder’. People are living life through their phone cameras – they don’t have the actual memory of doing or seeing something, only the picture of it. We’re saying: be present.”

“That’s what happens in our generation: you go on a night out, or to a gig, all you see is people using phones,” says Harvey. “But if I speak to our dad about the rave scene, no one had phones and they didn’t care about filming it. They were just taking it in and enjoying it. They were just having it.”

Being Present and Having It: it’s the EYK way.

Exclusive Booking Agency for Everyone You Know: North & South America