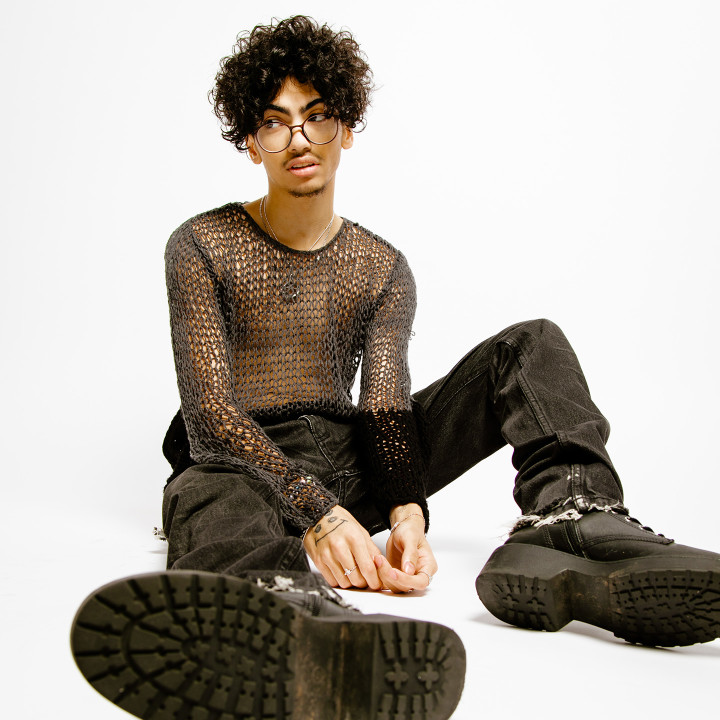 ericdoa is from what he describes as a "small ass farm town" in Connecticut, certainly not known for its artistic output or community. Without many like-minded kids at school, he spent most of his time on the internet growing up and met nearly all of his closest friends and collaborators online via platforms like Discord and Twitter. Eric grew up around a music-oriented family and was exposed to "raw pop artists" like Rick James, Earth Wind & Fire, and Teena Marie at a young age. When he started making music around 14 years old, these influences meshed with the music he heard online, and Eric taught himself to record and produce his own material.

As time went on, this bedroom-based operation developed a humble but engaged following on SoundCloud, where Eric released his debut project, Public Target, in 2020. On the heels of the project, and with several of Eric's friends and collaborators beginning to grow followings of their own, the online community began to circulate. The music they had been making via Discord calls since their younger teenage years was beginning to buzz, and was soon coined "hyperpop," even receiving its own Spotify editorial playlist to underline the attention.

As with any SoundCloud-born trend, there was skepticism about what "hyperpop" was, whether or not the kids making it would last more than a year or two, and why exactly the music sounded like it did when this first happened. But as Eric and his friends continued to release music, the attention grew, finding an exclamation point in Eric's late 2020 project, COA. Framed as a "coming of age" project released just after Eric's 18th birthday, COA helped make the buzz tangible, translating this weird new sound into a well-developed project that made an instant impact on DSPs, received a positive review from the notorious music outlet Pitchfork, and most importantly, pushed this Discord-born online community to new heights -- all from Eric's bedroom, and all thanks to a bunch of teenagers he met on the internet.

In 2021 Eric continued his upward trajectory of experimental releases and shared a slew of buoyant tracks -- his Interscope Records debut, titled "back n forth" which received major support from Rolling Stone and Paper Magazine, followed by "fantasize" which currently has 17 million steams globally and "strangers" which led to Alternative Press naming him one of "The Artists Set To Rule Your Year [2022]." In addition to his solo releases Eric also released his collaborative effort with fellow artist, glaive. The project, which was followed by a sold out US tour, received impressive praise from The New York Times, The FADER, Pitchfork, DORK and more. Today Eric has caught the attention from the likes of Trippie Redd, Yungblud, Addison Rae and many more.

As Eric continues to work on forging his own path, up next is his track "sad4whattt" -- which was made on a whim with his frequent collaborators Whethan, Glasear, and fortuneswan. "None of us really revisited the track after we made it. I laid a hook idea that I had for 4 days and ended up forgetting about it entirely until we threw it together in this pack of demos to send over to HBO. Not knowing what they would pick, they ended up choosing something that all shocked us, in a good way of course." Eventually the ecstatic song was featured on the Emmy®-winning HBO drama series Euphoria Season 2. While Eric no longer has to record on an XBox USB microphone out of his bedroom and he's finally met a few more of his best friends in real life, not a whole lot else has changed. The formula is still the same, and as he continues to release music his forthcoming project will show, Eric's next work will be his best yet.