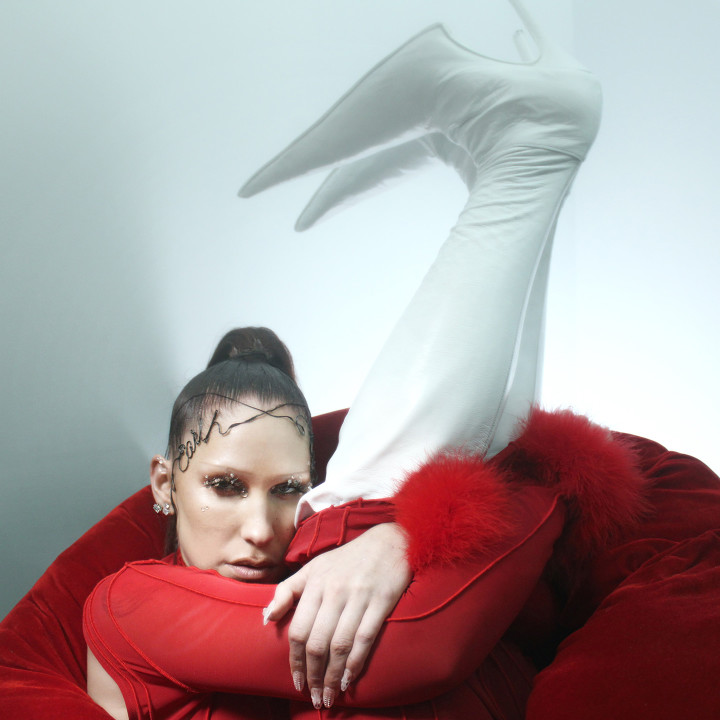 Whether it be using electronic or acoustic sound, Eartheater's distinct musical code is defined in its rich harmonics, flexing between tension and release. Her insatiable curiosity and desire to deposit complex feelings, atmosphere, stories, messages, and mirrors in music has led her to being a multi-instrumentalist, producer, composer, and director of many worlds. Her signature lazer whistle tone and octave-hopping vocals are often contrasted against deliberate restraint in her romantic, lavish, and sometimes cheeky records. She embraces the use of "ugly" elements in noise and emotion to amplify her ascent towards the ethereal.

Eartheater debuted in 2015, releasing two consecutive albums -- Metalepsis, followed by RIP Chrysalis. She then signed to experimental label PAN, who released her album, IRISIRI, in 2018. Following IRISIRI, Eartheater launched a mixtape titled Trinity on her own imprint Chemical X.

Her latest album Phoenix: Flames Are Dew Upon My Skin, also released by PAN, was composed, produced, and arranged by Eartheater, and testifies to the reincarnating resurrections the project has undergone over its first full decade of existence. While the album renews her focus on guitar performance and legible structure, Eartheater balances the unabashed prettiness of acoustic harmonic songs with the dissonant gestural embroidery of oblique instrumentals. Since Phoenix, Eartheater has pivoted to releasing music on Chemical X, most recently single "Scripture," a soaring pop anthem produced by friend Sega Bodega. Chemical X was created to serve as not only an outlet for her own material, but also for other developing artists that she takes under her wing. In 2022, the label released an EP by rapper Ish Couture and is currently incubating multiple other projects.

In addition to her own music, Eartheater has collaborated with a wide range of artists, from Grimes and Caroline Polachek to Show Me The Body and Moor Mother. She has lent her vocals to new songs by Yung Kayo, Tony Seltzer and LEYA. Eartheater has also composed original work for Proenza Schouler and the Alarm Will Sound orchestra, and has modeled for Mugler, Jimmy Choo, Fenty Savage, Barragán and Puppets & Puppets. Her music has been used by Chanel, Dior, Mugler, Stella McCartney, Acne Studios, SHAYNEOLIVER, Adidas and more.