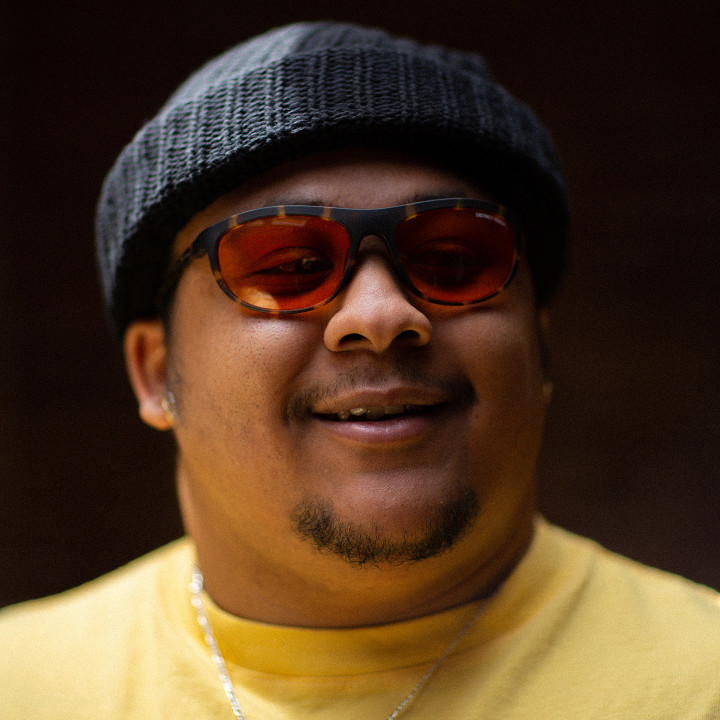 dreamcastmoe is the recording project of singer, songwriter, producer, and DJ Davon Bryant, a lifelong resident of Washington, DC. His music moves freely between moods and modes, hypnotic, romantic, traversing electronic, R&B, funk, soul, and hip-hop -- Resident Advisor dubs it "soulful, cross-genre dance music." This ability to adapt and finesse, to twist in different directions while staying true and coherent in vision, can be traced to his home city and its complex cultural history. "Most black kids in DC don't ever get to this point," he says. "This is what I am making this music for, in the DC tradition of soul and empathy and love that is rooted in this city. My music is for real people dealing with shit every day." A versatile, modern artist and collaborator, dreamcastmoe has thrived in the underground since his first uploads to Soundcloud and Bandcamp in 2017 and subsequent releases with labels like People's Potential Unlimited, Trading Places, and In Real Life Music. Bryant's laid-back personality, emotional honesty, and infectious energy shine through his work and how he talks about it, as Crack Magazine notes in their 2021 Rising feature: "a steady combination of confidence, creativity, and calmness." He grew up playing drums in church; he's worked dead-end jobs, had ups and downs, even sold off all his gear one time, but never stopped reinvesting in himself. He is quick to praise his co-producers, rattle off influences -- the visual feel of NBA 2K, the comedic timing of Bernie Mac, the savvy legacy of Duke Ellington, for starters -- and credit resourceful DC breakouts like Ankhlejohn that showed him the roadmap. His voice, a steady instrument, seemingly connects it all, capable of slow falsetto flow, swaggering talk-rap, and outright croon. His storytelling style is choppy yet fluid, like a mixtape, which is how Bryant sees his new 2-part project, Sound Is Like Water, arriving in 2022 on Ghostly's International's freeform label, Spectral Sound.

Part 1 opens on the blurred beats of "eL Dorado," which dreamcastmoe dedicates to his journey. It's a head-nodder, an off-kilter earworm co-produced by Max D (Future Times, RVNG Intl, etc.), with Bryant harmonizing hooks with synth jabs and a pitched-down presence. "This song is a chant that keeps me moving towards the places I want to be. My journey mostly digs into my love (sometimes a lack of) for self and allowing myself that space to grow."

"Complicated" is the slow jam, delivered smoothly from a Saturday night crossroads. dreamcastmoe is contemplative and committed -- gliding and locking ad-libs into skittering rhythms courtesy of co-producer Zackary Dawson -- but also willing to let something go, "acknowledging that everything in life IS NOT easy."

"RU ready" takes off from the jump as a tribute, challenge, and promise to his partner and his city ("The times you sat with me when I needed you the most / Told me the things that I needed to see / Young black man, really trying to be what I can be / And I'm really from DC). In its potent two-plus minutes, the sonics (co-produced by ZDBT) press the message, all cymbal crashes, breakbeats, and serrated synth lines.

Part 1 closes with "Cloudy weather, wear boots," a blitzing dance-punk track made in collaboration with Jordan GCZ on Bryant's first trip to Amsterdam. Lyrics land in a dream state; the club is heaven's gate, and Bryant is shaking the clouds from his back. "Sometimes we just need to hit the dancefloor and let go of everything."

The world of dreamcastmoe straddles virtual reality and the realness of DC, images both imagined and lived-in. Bryant has a knack for unexpected melodies but what makes his music so exciting is his capacity to defy the expectations of genre and image. A fluid ingenuity and vulnerability bottled by Sound Is Like Water, and this is just the beginning. Stay tuned for Part 2.