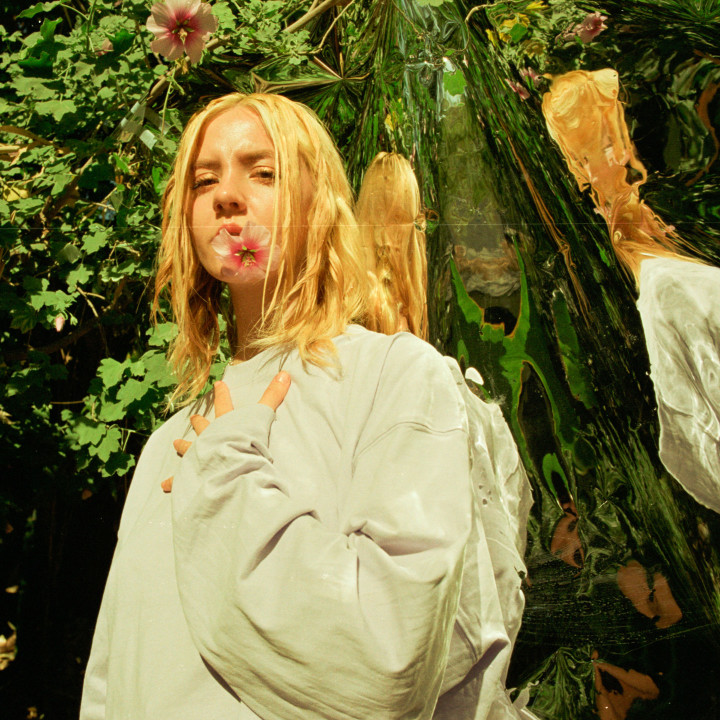 Dora Jar is an artist who refuses to be defined. Despite having only shared a handful of songs, each track the 24 year old has released has been distinctive, endlessly fascinating and, quite frankly, brilliant. From the hammering guitars on "Multiply" to the ominous "Did I Get It Wrong," they exemplify an artist with a clear artistic vision: to be as expansive, honest and unequivocally herself as is humanly possible.

Born in New York and raised in California, Dora's life has always been linked intrinsically with music. Some of her earliest memories are being with her mother, who is an actress, while she worked. "She was in the Titanic show on Broadway," the singer recalls, "and I can remember the very high ceilings backstage." Likewise, Dora remembers singing along to Stephen Sondheim musicals. "There are a lot of thunderstorms in New York, and I can remember playing the Original Broadway recording of Into the Woods as lightning was outlining the buildings. I loved that feeling of spooky darkness."

While she may have been young, the move to California irked her. "My mom remembers me saying, 'I'm not a Californian! I'm a New Yorker!,'" she laughs. However, the move was important. Dora's sister, Lueza, was born with cerebral palsy and, as a priority, her parents wanted to send her to a school for children with special needs. "It was really hard to have a kid in a wheelchair in New York City. There are so many buildings and elevators; there are too many moving parts," Dora explains. "In California, there's this school called the Bridge School that was started by Neil Young, who has a kid with the same disability my sister had, and my family bought a special wheelchair van and we moved so she could go there."

The Bridge School also expanded Dora's musical world. Each year, the school hosted a weekend-long charity benefit concert, and it was here that she was introduced to artists like the Foo Fighters and Regina Spektor. "Where we were on stage was behind the acts while they were performing," Dora says, "so you'd see the whole audience of 30,000 people. The sound is really different when you're backstage: it kind of echoes because you're not hearing the speakers facing towards you. To this day, I prefer hearing the sound from behind. Hearing it bounce off an audience is just epic."

Dora was sent to a religious school where there were around 19 students in her whole school year. While her parents were not religious, the students went to church four mornings a week. "There's something cool about the sacredness of it," Dora says of it now. "You really feel that it's a space of worship. And what does it mean when you're a kid? It's intense. And then the priest is telling you a story about the devil tempting Jesus. I was in kindergarten and I can remember being really scared of that story. My mom was mad that they told it to us that young."

While Dora isn't religious, she does practice meditation. "I think that must go back to just starting every day quietly and with some opportunity for setting an intention," she says. "I didn't realise it at the time, but I think it did instil this notion to not rush into your day right away. We have this moment to be thankful for the dew on the leaves and the birds. It's deep, but that escapes us a lot of the time."

Someone who taught Dora this sense of gratefulness was her sister, Lueza. While the pair couldn't communicate in a traditional manner due to Lueza's disability, Dora says that they had their own language made up of facial expressions and their deep connection. "She just saw the moment in its full realness," Dora says. "She was very much a big sister to me, even though she couldn't be a typical big sister. She just was. If I was being a brat for whatever reason, she would give me this look that was like, 'Really? You're gonna do that right now?' She was amazing."

The pair would watch movies on repeat together, including lots of Rodgers and Hammerstein films. "People make fun of musicals and how everyone breaks into song all at once, but actually life is kind of like that. I feel like there is a layer of life where even if it's just a mundane moment, there's a song going on. If life is a performance for the angels, which I think it is, there's a layer of performance that I think we don't even know that we're doing," Dora explains. "I think my sister really understood that, too. It's why, when someone was taking themselves too seriously, she would acknowledge that they didn't even know that they were putting on this performance. It's kind of like she was meditating her whole life. She was just watching it all and accepting it all. She had to. She had a hard physical life, but I think she transcended it in a way that most people don't get to as a result. She just witnessed and accepted. I'm still learning from that."

Nevertheless, life with a disabled sibling was complicated, and Dora says that growing up she was often avoidant and would dissociate from the realities of her sister's health issues. She describes compartmentalising her life, never letting on to friends about her emotions, and also feeling undeserving. "A lot of people think, 'Why me?' when something bad is happening. But I think I've asked that question from being fortunate in some ways. I wasn't the disabled kid. I have a body that works and I have a voice that works," Dora says. "Am I using it enough? What am I doing with it that can show that I'm not wasting it. It's a pressure that I put on myself."

When her sister died in April 2011, Dora decided that she needed to get away, heading to a boarding school on the east coast. She wasn't particularly academic, instead spending her time in school theatre productions and playing guitar in her room. She also didn't speak about her sister or her life back in California at all. "Holding so much trauma in I really felt like I was living a lie," Dora admits.

It was a process, she says, to become open with herself and others about what she had been through. But there were also the magic mushrooms. "I did a shit tonne of mushrooms and had a beautiful time for the first couple of hours; I saw the animal kingdom and rainbow dots on my ceiling," she says. "And then it was a kaleidoscope of deities coming at me indescribable shit. But the one thing that I can describe is that I kept on seeing the word 'okay.' It would shift in a good or bad way. I was asking myself, 'Am I okay? Am I not okay? I don't know.'"

Dora had been doing music all through high school, writing songs that she's glad no one can hear today. But after feeling compelled to go to college only to drop out, she found herself babysitting and wondering whether she was squandering her time. Ultimately, she ended up moving to Poland, where her father is from, to stay with her half-brother, who had just had a baby. While Poland was amazing, she was also uploading little snippets of her playing music on to Instagram. One of these videos caught the eye of a producer in London, who said that they should work together. So Dora went to London.

"We ended up making a song together and it was so good," she says. As a result, she relocated to London and began work on her music in earnest. "I was there for a year," she adds. "I'm not a producer, but I know what I want. That was training, I guess, on how to be a boss in the studio and get the sound you want. I also learned how to be efficient with the time because you will have a session with someone and you only have a day. If you want to write a song you can. I guess it was the skill of getting deep fast and getting to the point."

"That whole time in London was me proving to myself that this was what I wanted to do and wanting to know my shit, my vision and take full responsibility for the songs that I write," she continues. In the time since, she has been "finding my people who get it and who I can communicate with," including producer Ralph Castelli and Vron.

The songs that she has released so far definitely demonstrate someone who knows their shit. Her first single, "Did I Get It Wrong," is a claustrophobic trip hop song about doubting your decisions and self-blame that sounds like Portishead meets Mitski. Follow up "Multiply," on the other hand, is the complete opposite, all crunchy guitars and delicate vocals. It's still vivid, though, something that Dora demonstrates again and again on songs like the Fleetwood Mac-esque "Believe" and the haunting "Quiver," which speaks of Dora's first real experience of heartbreak. Demonstrating her innate ability as a songwriter are the tender acoustics of "Look Back," a song that was written nearly a decade ago but which holds its own among even her most recent releases.

"That song is about loss and it sounds like heartbreak, but at the time I had never been heartbroken," she laughs. "So I just wrote what I thought would be heartbreak and really didn't think about that song for five years. When I finally felt that feeling of heartbreak, I was like, 'Oh my God' and I started playing it. I realised why I wrote that song: it was to comfort my future self."

Dora's upcoming project is set to be equally as eclectic. "Musically, the only thing that I want from me is that it's not going to sound like the last thing," she says. "My next project is going to be bonkers. It's nothing like anything I've released. You're not going to get a sound from me. You're going to get me exploring everything I can do. That's my ambition. I want to stay flexible and shape shift."

Part of this is just committing to the first ideas that arrive and being playful with it. "I don't want to say that I'm not taking myself too seriously because I always am. But there is no persona, there is just me," she says. There are also no alternatives. "Nothing really makes sense to me except from making music. There is really no other option. Except, maybe, for babysitting..."