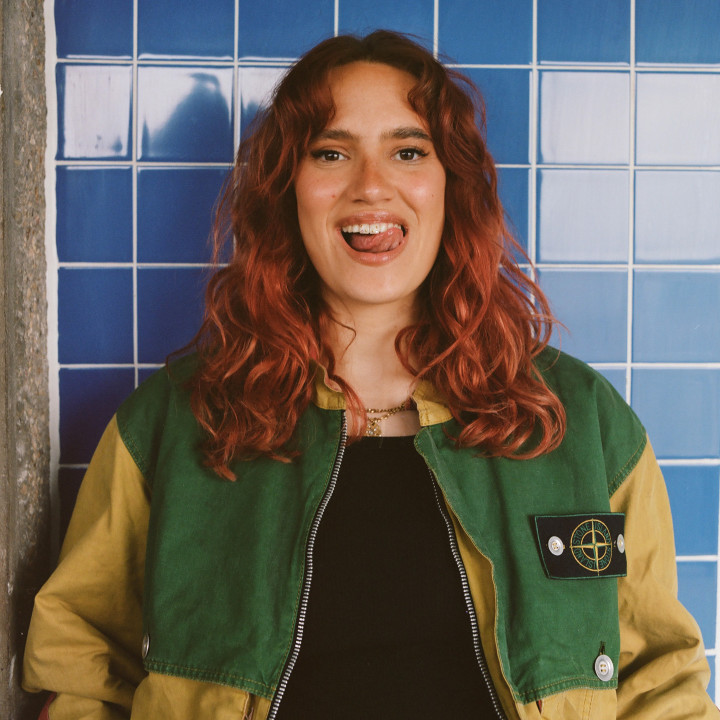 'Just fucking express yourself.' That's the takeaway from Delilah Montagu's third EP 'Baby.' Following the release of last summer's 'This Is Not A Love Song' EP, the London-based artist's new project is a total departure from the brooding and melancholy -- influenced by artists like Phoebe Bridgers, Arlo Parks, Bon Iver, St. Vincent and Lizzo. A breakup during lockdown led Delilah to reconnect with her sense of self and in doing so, she found freedom and happiness -- and it's palpable in every track.

'I realised I was trying to be someone I'm not and trying to be ready for things I wasn't,' says the 23-year-old. 'I've let go of all that pressure.' The project is an exhaling release from the shackles of expectation, looking to a new chapter with hope and excitement.

As the UK embraces freedom after its year of isolation, Delilah embraces hers and fantasises over the thing we've been starved of most -- touch. This EP, which features collaborations with BRIT-winning producer Fred again.. and Billie Eilish-approved artist Towa Bird, is a dazzling ode to intoxicating first touches, spontaneous nights out and the thrill of finding new love.

Produced by Benjy Gibson, who co-wrote every song with Delilah, the project is far from autobiographical like her previous releases. Instead, the pair created characters in a hedonistic, passion-fuelled fantasy world that they lived vicariously through as the world was at a standstill. The songs map a journey of lovers meeting and having a wild weekend road trip together; going to parties, having life affirming sex and passionate fights -- with nods to TV series <The End of The Fucking World> adventure and spirit. Moving away from such autobiographical song writing allowed Delilah to tap into the universal shared experience of falling in love.

'It doesn't matter who you're into, what sexuality or gender you are, we all have the same feelings. When we fancy someone, we all do the same things,' says Delilah, who was keen to make sure her visuals reflect this idea of unity. In the music video for 'Coming For You,' real life couples of all sexualities and backgrounds are shown, with Delilah their narrator. In sharing this fluidity of the characters, Delilah shows a new acceptance of her own sexuality. 'I've had girlfriends and boyfriends, but I don't identify strongly with being gay, straight or bisexual. I now know that this fluidity can be freeing. It doesn't mean I'm confused and I don't need a label.'

For Delilah, song writing began aged six, the same year she learned to play the piano and guitar. Raised by her writer mother in a bohemian village called Forrest Row in East Sussex, television was banned, so Delilah looked elsewhere for entertainment. 'I would sit and write songs all day, it was a time of constant creativity,' says Delilah. She would hang out with musicians and painters who were lodgers in their annex and grew up listening to Carole King, Van Morison, Regina Spector and Leonard Cohen. 'People were so confused at how a 10-year-old could know so much about heartbreak, but I absorbed the experiences of everyone around me and put it to music.'

Her big break came unexpectedly at 18 when she was spotted supporting a friend at a gig in London. Delilah was taken to New York, Nashville and LA to write before signing to Columbia Records on her 20th birthday. 'I hadn't been grafting for years so I was really unprepared,' says Delilah. In the madness, she lost her sense of self. 'I was going into studio sessions with these older men who'd written all the Coldplay hits, so in my head I just thought they knew best.' It took Delilah a few years to realise that she was actually the boss.

Delilah's debut EP 'In Gold' introduced her to the world in 2019 with its pensive, soulful ruminations on coming-of-age, produced by Joel Pott and Barney Lister (Obongjayar, Celeste). In 2020, her second EP 'This Is Not A Love Song' showed a growth in maturity and the beginnings of a more self-assured artist. Written on a trip to LA with producer Robin Hannibal (known for his work with Drake, Kendrick Lamar and Anderson Paak), the songs were deeply autobiographical and marked a new process that was 'brilliant,' but slow and intense, spending whole days writing a verse lyric.

New EP 'Baby' marks the first time Delilah is having real fun. 'Benjy [Gibson] and I wrote three songs in the first day by just jamming out and having fun. He's so fresh to the scene so brought a different kind of energy,' says Delilah. Though he's produced for BRIT-winning Fred again.. (his brother) and composed for Grammy-nominated K-pop band BTS, this is the first full project Gibson has overseen. 'The process felt natural and intimate, made in her own garden shed studio. 'Creating in my own space allowed me to really put my own stamp on it, I play piano and guitars myself throughout.'

The lyrics they wrote together are open and honest. In 'Coming For You,' sexual desires are front and centre, with killer guitar riffs played by Tik Tok sensation Towa Bird. 'People always say that they do, but it was about one in 10 until I met you,' sings Delilah. Featuring sexually charged, experimental sounds and noises from Delilah in the background, this track is an explosion of expression. 'It's about how fun it can be when you fancy someone,' says Delilah. It's not trying to be sexy, it just is sexy.

In 'Baby,' Delilah sings: 'I don't mind if we're sitting on the sofa for the rest of our lives' and 'I'll let you borrow the spare room in my heart.' Co-produced by Fred again.., who also plays the piano, it is a sun-soaked, happy expression of new love. 'It's me saying that I don't care what we're doing as long as it's with you,' she says.

Even low tempo 'Lost Keys' will make you smile. With haunting vocals, it describes turning up to a house party in an attempt to bump into the person you fancy. 'It's about searching for them in crowded rooms,' says Delilah, 'The nice kind of torture.'

Above all, Delilah's new EP 'Baby' is about freedom, feeling and taking back control of your happiness. 'There's been a huge shift for me in my ability to express myself,' says Delilah. 'I used to be so afraid of being a woman, ashamed of feeling sexual, scared of falling in love, but I'm embracing it all with this EP.' Marking three years of sobriety, Delilah no longer hides behind any mask. When she first gave up alcohol, Delilah turned to food and sex to replace her addiction and numb herself. Now, she realises being able to feel isn't as painful as she once thought. 'My confidence has soared and I'm fully embracing being awake. Even if it's painful, I just want to feel everything now.' The strong desire to truly feel is something we can all relate to right now. This EP will be the soundtrack to your post-lockdown freedom and summer of love.