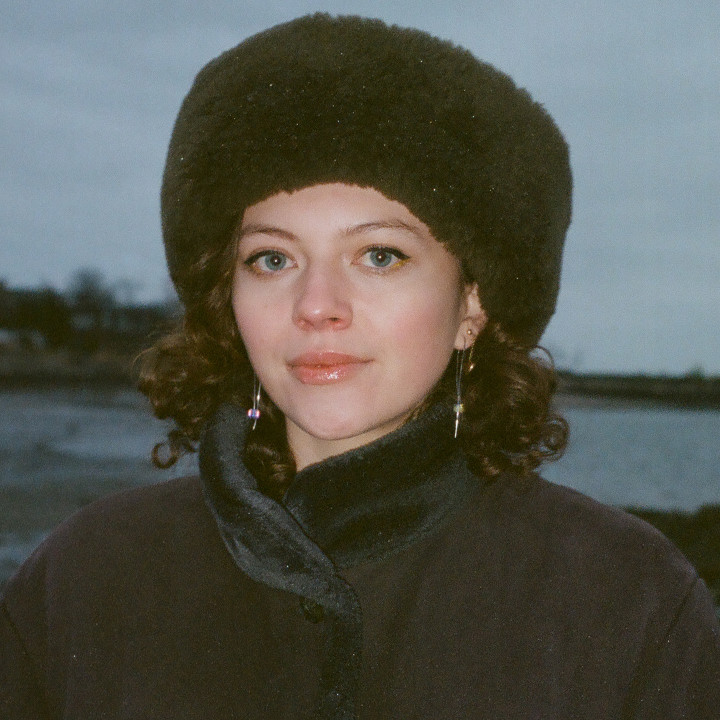 Under her alias Daneshevskaya, Anna Beckerman writes tough-minded, tender-hearted songs about saying fond farewells. These aren't necessarily breakup anthems. Some might be addressed to a lover, but most are about friends and acquaintances, those people whose lives intersect briefly with yours before they follow their own paths elsewhere. Bury Your Horses, her debut EP, locates meaning in these absences and finds hard-won contentment with dwindling memories left behind. "Thank you for leaving, you have no idea how much fun it's been," she sings on "Right About It," her voice mournful but forceful as an acoustic guitar subtly mimics the rhythm of a racing heart.

"I've always loved sad songs about heartbreak," says the Brooklyn-based singer-songwriter. "Before I even had my first kiss, I would listen to them on repeat, even though I had no real experience with any of that. I say 'heartbreak,' but for me that includes friendships ending. These songs were just reactions to people leaving my life. I wanted to say goodbye to them and learn how to incorporate those memories into who I am." Finding herself reflected back in those she loves and misses, Beckerman has crafted an eccentric and inviting debut that toggles gracefully between melancholy and humor, mournfulness and playfulness, whimsy and gravity. It's an album of hard truths and tragic partings, but it's also bursting with clever turns of phrase and oddball references to horror movies and childhood pets. "It was made with a lot of joy. I tried to let fun and joy lead the process."

Music has never been a solitary pursuit for Beckerman. She grew up in New York State, the youngest child in a family that pursued music as both a profession and a personal obsession. Her father was a pianist and musicologist, her mother an opera singer. "Every family gathering was very musical," she says. "We were always playing music together in a way that felt very safe. I learned to trust other people and have fun with it." Similarly, her grandmother, a poet, encouraged her literary pursuits. "She was very involved in my life, and I was obsessed with her. She was like a celebrity to me. She was so creative, always sending me poetry she had written."

Beckerman wrote songs in her bedroom as a teenager and kept writing after she moved to Brooklyn, finding inspiration in artists like Patsy Cline, who sings sad songs with gusto. It took a while before she realized that other people might actually want to hear her compositions. "I had no goals with music at all. My friend Maddy Leshner was one of the first people I ever showed my songs to. We would get together and play music all night, just the two of us, not even recording it. We were just doing this fun thing together as friends." When Beckerman decided to post music on Bandcamp, she used her Lithuanian middle name -- Daneshevskaya -- as a tribute to her family.

Writing and playing with friends, she developed a very idiosyncratic lyrical style that drew on the poetry of her grandmother, but filtered through her own particular perspective -- her own heartaches, her own jokes, her own observations about the trajectory of life. Opener "Dr. Johann Averies" was inspired by a pandemic viewing of Paranormal Activity, during which that name is mentioned repeatedly but the character is never glimpsed. He's not mentioned in the song either, which explores those small, intimate, comfortable moments of boredom or silence in a relationship -- moments that are usually lost to memory once that friendship has run its course. Averies is a ghost in the lyrics, which lends an eeriness to the fluttering piano notes. "That character stuck in my head. I like songs that have a nice, peaceful quality to them, but then there's something wrong somehow. Something's a little off."

Fittingly for an EP about the people who slip out of your life, Beckerman made this album with close friends, including producer/guitarist Artur Szerejko, string arranger Finnegan Shanahan, drummer Robby Bowen, and of course her late-night jam partner Maddy. This makeshift band recorded piecemeal, in their apartments or in studios; Beckerman tracked her vocals in her father's office. "I tried to let go of the version of the song I had in my head and let in other people. I wanted people to have fun in their own way. I wanted to let them run away with whatever they saw in the songs." Together, they add warmth and whimsy to these songs, as the chamber-pop strings and steady rhythm section draw out the vulnerability in her vocals and reinforce the something's off quality.

While far from horrifying, these songs can be surprisingly visceral, peppered with physical details and often portraying what ought to be pleasurable experiences as traumatic. On "Estuary Dig," which features the EP's breeziest hook and Beckerman's most bittersweet vocals, she and a friend spend a lovely, lazy day at the beach, digging in the sand and hoping it will never end: "Soon we won't have any skin left on our hands," she sings, as the strings crash like waves. "There's definitely a draw toward heartbreak on this EP. There's emotional pain that shows you that you had something good, but only after that was taken away from you. It's a special feeling, even after it ends."

Revisiting songs that were written during a five-year stretch, Beckerman found they had changed. They revealed new truths, new facets of meaning that she couldn't have comprehended when she first set the lyrics down to paper. She discovered that she could be her best self in her songs: "Sometimes the songs were smarter than I was. When I was being very emotional or super sensitive, somehow in these songs I was able to be happy for other people even as they were leaving. I was able to wish them the best. Maybe that's why I was initially hesitant to release them, because they sounded so intimate and vulnerable. But I don't have regrets, and I don't cringe when I hear them. It's more like looking at a photo from years ago."