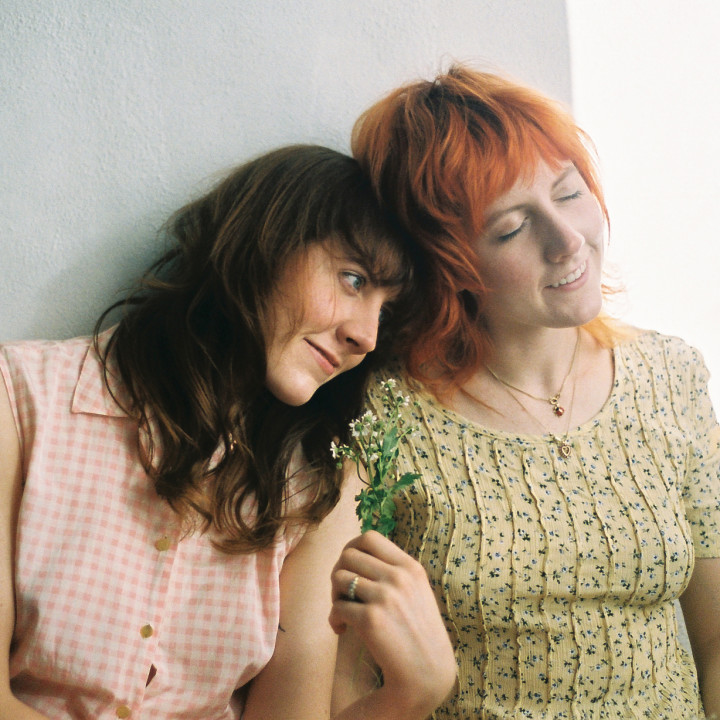 Companion has fought hard for happiness. At just 23-years-old, identical twin sisters Sophia and Jo had faced a decade of darkness. Then they built lighthouses.

Companion's debut album, Second Day of Spring, is a towering beacon: a victorious indie-folk record that further introduces two brilliant songwriters who are also mesmerizing singers, using voices that feel light and weighted gazes that see clearly to offer the rest of us comfort in treacherous corners.

"A lot of this album is rooted in healing from familial hurt," says Sophia. "There are songs about marriage and healing from mistrust. Family ties that have been broken."

Hope cracks through early songs on the album, like grass growing in sidewalks, before sprawling out into lush meadows by the end of the record. Acoustic guitar is a constant companion for the twins' natural harmonies, joined at turns by standout guests ranging from viola to organelle to trumpet to piano.

Sophia and Jo were homeschooled and raised on about nine farmland acres just outside of Norman, Oklahoma. Their lives changed abruptly at 13, when their father, who suffered from Parkinson's disease, took his own life. "I am not afraid of telling people that my dad killed himself," explains Sophia, calmly. "Mental health is such an undervalued issue that's not talked about enough -- so we talk about it through our writing." The loss pushed the girls to write. "I started playing guitar at 14, and we started writing together at 14 or 15," Jo says. "It came pretty naturally, but as siblings, there was friction." The tension made the songs even better.

With Second Day of Spring, Companion stands confidently on their own, making their music on their terms. Album opener "How Could I Have Known" exudes quiet strength as Sophia and Jo give thanks to the unknown forces that bring people together, acknowledge that the same forces may take people away, and meditate on the permanence of impermanence.

Guitars nimble and vocals rising in effervescent waves, "Forfeit" follows with an embrace and tender acceptance. "I wrote this one in March of 2020, right after all the [pandemic] shutdowns," Jo says. "I was very lonely, but my good friend who was then still a new friend happened to live down the street. So we said, 'Well, I guess we only have each other right now.' This song just encapsulates that comforting friendship."

"Arms Length" toils in the pain of longing to love but still feeling the pain of broken trust.

Album standout "If I Were a Ghost" is a spellbinding feat of songwriting. Sophia wrote the song after an argument with her mother, retreating to a small chapel on their family's property that their father built by hand. Sophia had just been through a breakup, and she channeled her own raw hurt into something much greater.

"My mom and I were having difficult relationship issues, but I knew she was still in grief," Sophia says. "She was really suffering. This was just five years after her husband's death. So, I was just trying to really put myself where she was standing, just to understand what she was feeling."

The result is gorgeous commiseration, heartbreaking and soul-affirming in its empathy. "It is an emotional song," Sophia says. "I don't really cry when I write songs, but I was sobbing while writing this one."

"Snowbank," an immersive song Jo first wrote as a poem, is a favorite of the sisters. As their harmonies intertwine and play, an intimate moment is memorialized. "23rd Street" turns a corner and finds Companion on the other side of a harsh winter, poised and ready for the sun.

Featuring a chorus of strings, "Second Day of Spring" welcomes new life. "It was very important to me to make sure it sounds like it's heading towards a new season," says Jo. "Newborn of Springtime" picks up that torch.

"Some of the songs, like 'Forfeit,' 'If I Were a Ghost,' and 'Arms Length,' feel very much like fall and winter -- the winter of my life," says Sophia. "And then we move into springtime -- and we end on a spring note."

Instrumental "Sunday Morning" is a lush invitation to let go and get lost, relishing nothing more than right now. Warm relief floods "Waiting for You," as the record closes with hope that seems to swell like the chorus of instruments supporting Companion's soaring vocals.

On the album, a gradual march toward openness, possibility, and warmth is underway, tracing Sophia and Jo's real-world path. "It's been 10 years since our dad died, and it's taken 10 years for us to get to this point where we feel like trusting," Sophia says.

"We don't feel drawn toward chaos or constant darkness, whether it was self-manufactured darkness or just bad luck. We both feel better. We're not unhappy every day anymore. And this album is like that next step toward this new phase of life." When asked what they hope listeners experience, Companion offers individual -- and beautifully complementary -- wishes.

"I saw an older man the other day, just walking down the street with headphones over his ears, and he was just smiling so big," says Jo. "That's the feeling I want people to have -- that feeling of, wow. There's beauty even in the simplest things."

"I want them to hold the beauty of the world -- to just have a feeling of contentment and to know there's nothing really to do with that other than to just think, 'I'm glad I'm alive today. I'm glad I get to see this,'" Sophia says. "There is still beauty, even amidst all the darkness." Second Day Of Spring arrives as a companion to anyone who needs a warm embrace, and a reminder to find beauty in every small thing.