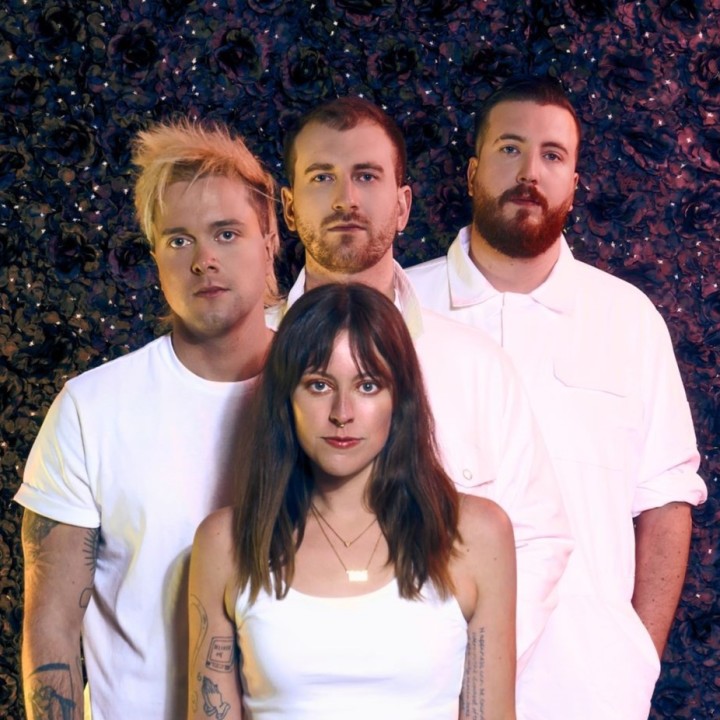 The four-piece, managed by Jake Gold (The Tragically Hip), experienced a considerable evolution since forming in Guelph in 2014, and releasing its first recorded music, two EPs in 2017, titled I and II. Their songs racked up over a million streams on Spotify, landed multiple tracks on CBC Radio 2's top 20, and facilitated extensive touring of Canada and the U.S. through much of 2018.

"We've definitely moved away completely from our indie folk sound," says lead vocalist Sheila Hart. "We've emerged as a much more alternative pop band instead. We still have a cellist in the band, but strings aren't the focus anymore. It's a sound we moved towards on the second EP with a song called 'Wonder.'"

Also significant to Common Deer's new direction was the departure of co-vocalist Graham McLaughlin, leaving Sheila as the one and only front person, free to put her rather personal perspective to the music they all write together: Adam Hart (synth, guitar, cello), Liam Farrell (percussion, synth, samples) and Connor Farrell (bass).

Mostly completed before the pandemic, the four recorded MAXIMALIST with producer Luke Roes at his "small but mighty studio" in London, Ontario. A close friend of Adam's since his band Ivory Hours shared a bill with Common Deer in 2016, Sheila says, "We had a great personal relationship, and he's really pushed me as a songwriter."

The lyrics, though, are undeniably Sheila, every "fucked up inside" revelation, every true-to-life anecdote. "There's been times when friends have joked, 'Are you ever going to use a metaphor or are you always going to speak in literal terms about yourself?' she laughs. "Write what you know" is her response.

One topic she does tackle is mental health. In 2017, she was diagnosed with Borderline Personality Disorder (BPD), "something I'm okay with saying publicly," Sheila says. "I have a harder time regulating my emotions. I feel things very strongly and cycle through those emotions very quickly."

On MAXIMALIST, she takes two different approaches, in the lead track "Negative Thot" and the first single, "90 Days," for example. On "90 Days," she writes "I get carried away with my heart," but notes that a traditional treatment program is not a panacea, while in "Negative Thot" she's having more fun with it with lines like, "I'm fucking crazy and I like it."

"That is a song where I'm just giving in to those emotions, 'this is me,' while '90 Days' is 'this is how I am, but this is not how I want to be,'" Sheila says. "I feel a responsibility to do right among my fellow borderlines. I have an opportunity to talk about it because the representation of BPD in popular culture has been horrible for a long time," she explains, referencing the movie Fatal Attraction.

Other songs, like destined singles "Fuckboi," "Guts" and "LonelyFans," are also quite personal. "Fuckboi" is a diss to a guy she dated and ghosted her, but after her BPD diagnosis she realized "girl, maybe you're the problem." "Guts" is about being disrespected as a young woman in the music industry; and "LonelyFans" is a reflection of how she might have spent time during the pandemic had she been born just a few years later.

How did they all get through these difficult two years of covid? Sheila is doing her Masters in Professional Communication (MPC) at Ryerson University; Adam continued writing and demoing; Connor learned how to code; and Liam built a music studio.

And as for the curious title of Common Deer's debut album, Sheila pulls up the official definition of a maximalist.

"Usually what comes to mind for people is the aesthetic, but it has another meaning, often used in a political context: a person who holds extreme views and is not prepared to compromise," she says. "It resonates in negative ways; there's been so much of that, but on a personal level, for us, it means setting our minds on our particular vision and not compromising anymore.

"While we're happy with how the last couple of years have gone with Common Deer, there was definitely a compromise there. Looking back, we were more flexible with things that didn't serve us and now we're going to be more intentional and more unwavering. I don't want to sound too Machiavellian, but I have a focused mindset and an unstoppable feeling that whatever gets in the path is going to get swept out of the way."