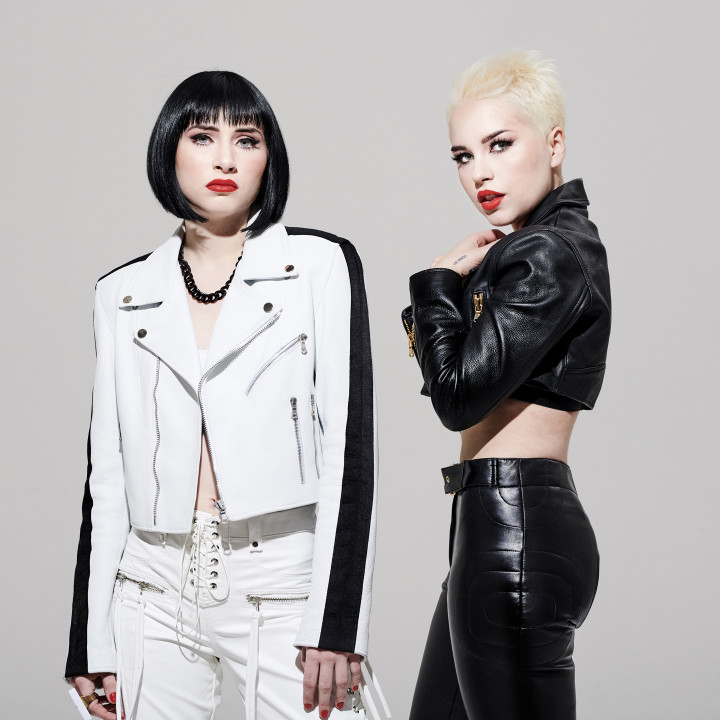 Guitar at the ready, attitude on point, two women walk into the room in red, black, and white...

If they stepped out of a frame from a Quentin Tarantino flick, no one would question it. The sister duo -- Charlotte and Sarah Command -- turn life's ups and downs into alternative music underpinned by live instrumentation and bold production. From music to fashion, the Toronto band makes a statement with everything they do.

"It started with red," says Sarah. "I wanted a color that would symbolize the power of our last name, 'Command.' Along with love and heartbreak, red resembles boldness. I needed that. For the majority of my life, I wasn't a very confident person. Then, we embraced black-and-white, because we are a yin and yang, my sister and I. Our look reflects our synergy; the songs that Charlotte writes partnered with the instrumentation I bring. This is our identity."

The sisters worked towards crystallizing that identity since childhood in small town Alberta. As children, they started harmonizing together before eventually performing local shows. In middle school, they cut their teeth on the country music circuit, packing the Bluebird Café in Nashville, touring Asia, emerging victorious at the John Lennon Songwriting Contest, and performing for Yoko Ono during the celebration of John Lennon's 75th birthday.

In 2016, they settled in Toronto, and the move represented a turning point. Embedding themselves in the scene, they honed a combination of killer songcraft, social media savvy, and IDGAF style.

"Growing up in a small town, I feel like I wasn't really being who I am as a person," admits Sarah. "I was assessing myself due to the culture and the people around me. I dropped out of high school, because I was bullied really badly. When we got to Toronto, we were surrounded by so many different types of identities and found support for who we are."

"In Toronto, you feel like you can be yourself and be accepted," Sarah continues. "We took all of these pictures in crazy red outfits and would show up to events like that. We decided to share what we were doing, and we found a community on Instagram that supported being loud and being ourselves. Tattoos and piercings were a symbol of us becoming who we are as sisters in a band and not being afraid," she says, highlighting that many of her musical heroes are represented in her tattoos.

They immediately hit the studio and focused on crafting a scorching sonic style influenced by everyone from The 1975 to Alanis Morissette, Hall & Oates to Lenny Kravitz. Sarah drew on a lifelong love of shred gods such as Joe Satriani, Steve Vai, and Orianthi, as Charlotte nodded to the songcraft of Sia and The Weeknd, cultivating a sharp signature sound steeped in mind-blowing musicality and tight hooks.

As they attracted a growing following, they ignited stages on both sides of the border in addition to forming coveted relationships with Martin Guitars, PRS Guitars, Marshall Amps, MAC Cosmetics, and Boss/Roland, to name a few. Along the way, they inked a deal with 21 Entertainment / Universal Music Canada / Republic Records.

"I'm inspired by songwriting that tells a story and resonates on a deeper level," Charlotte reveals. "I want to display emotion in brutally honest lyrics and disruptive production on a sonic level. A twist of our two loves: alternative and anthemic music." This style is on full display on their debut EP, recorded in LA with Tim Pagnotta (Walk The Moon, Weezer, Blink 182, Neon Trees).

"Command Sisters is my sister Charlotte writing these songs while I create the image that embodies our music. We want our world to be something you can't look away from even if you try to," Sarah says.

"We're two sisters who love making music," Charlotte leaves off. "I want listeners to see that. We pour our hearts and souls into this. Hopefully, it makes you feel something."

"On a deeper level, this feels like our life purpose," Sarah concludes. "We try to make our music and career an example of perseverance, staying strong, and continuing to follow your passion."