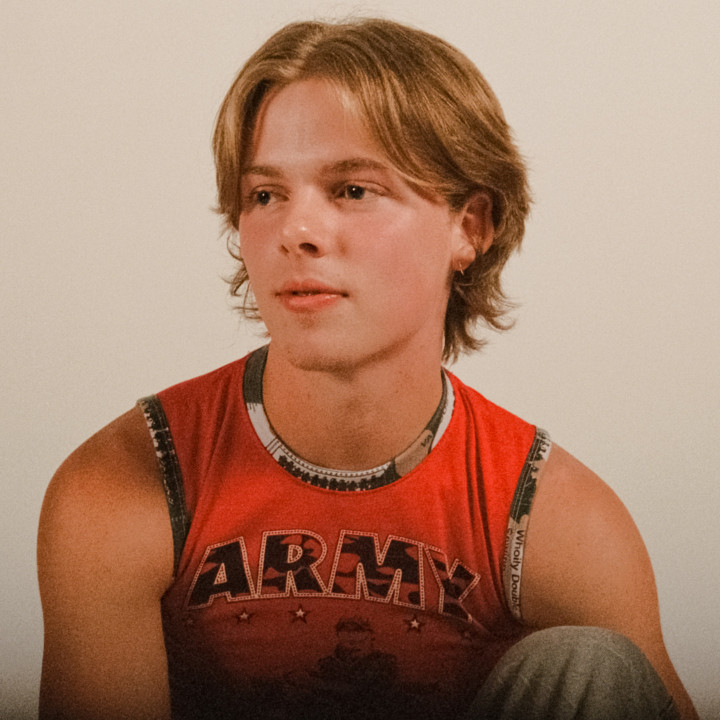 Few artists embody generational dysmorphia in the same way Cody Jon does. Growing up through the 2010s, raised on music of the 80s, inspired by the hits of the 90s and the visual aesthetic of the 2000s, Cody Jon is a temporal mish-mash. His songs are unapologetically hook-heavy showing a healthy respect for the boy bands of the 90s but self-produced with the zaniness of a kid who's spent too long in his own bedroom in the microclimate of deep suburbia.

Those front and center pop hooks draw inspiration from an early diet of Fleetwood Mac and INXS and a later infatuation with 90s R&B icons Brandy and Aaliyah. Million dollar choruses recorded through a birthday present midi keyboard and produced on airdropped software, these are big songs made 'bedroom.'

Growing up around his parents' South Sydney dance and karate studio, Cody was inspired by the communion of song and movement in those classes and he began singing at age 5. Now 18, his youth has been coloured by a global pandemic and the 90s coming-of-age journey hasn't looked anything like that which was promised in the films and songs he grew up on. The world outside his bedroom remained on hold and those fundamental growing up experiences have dramatically differed from the rose-colored expectations. Though limited, those out of house moments have been peppered with sparkling inspirations, from the 100 GECS CD stuck in his broken car CD player to the handful of live performances he managed to squeeze in before the world changed.

Despite finding a ready audience, almost exclusively online, his early songs weren't written with public consumption in mind. Debut single 'poison' was recorded for the pleasure of his close friends who, sick of listening to the mp3, badgered Cody into uploading the song to streaming services so they could listen at their leisure. More than half a million streams later, the song found new life amongst more than just his closest. Similarly, his third release 'all thanks to you' was actually one of the first songs he wrote and produced, simply written for a friend as a birthday gift.

Such is the spirit of his songwriting, records crafted not with any direct commercial intention to them but simply as a product of his influences and inspirations. These are left-of-center gems from a boy whose only exposure to song making has taken place several feet from his bed. Tamagotchis and DS,' boy bands and Avril's Sk8ter Boi, all finding a place in the scope of Cody's music.