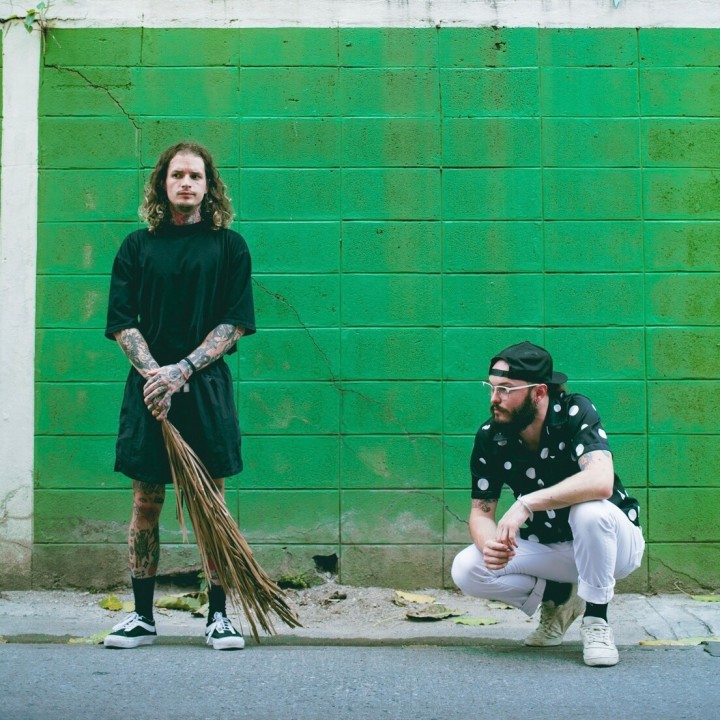 Beyond the fog of burning blunts, the sea of whiskey, and forest of empties, you’ll find two sweethearts in a Nashville garage. Just as they were yesterday, the day before that, and years prior. Searching for the perfect combination of string plucking, button pushing, and knob turning to craft the ideal sound to make you forget your world and step into theirs. The aforementioned sweethearts are Jordan Kelley and Jason Huber; known to most as “Cherub.”

It all began in 2010 at Middle Tennessee State University. The two met as Jason was playing around town with local bands and Jordan was crafting what would become known as their first album, Man of the Hour. A few years later, it was the song “Doses & Mimosas” that caught the attention of the public and gained the interest of Columbia Records, who signed the duo in 2013. Their four-year major label run brought their fans two LPs, Year of the Caprese and Bleed Gold Piss Excellence, while also sending them around the world playing festivals such as Lollapalooza, Bonnaroo, Glastonbury, Outside Lands, Osheaga, Summer Camp, Summer Sonic, and headlining four US tours. Now, a gold record and 130 million Spotify streams later, the bond between them remains “unfuckwithable,” as they construct their newest batch of genre-defying anthems.

From the streets of Bangkok, to the dive bars of Nashville, Cherub has been drawing inspiration from everything around them. “Each one of these songs was written and recorded at different times, in different places across the world,” says Jason.  “It seems to make sense, releasing each new song individually, giving us a chance to take you to where we were in our heads when it was created and pair each track with a something visual to tie it together.”

Straying from the common record label strategy of releasing a single or two followed by an album, Cherub has decided to give each new song its own time in the sun. “We don’t want anything to get lost,” says Jordan. The new collection of work spans multiple genres while still keeping with the same style of addictively playful melodies Cherub fans have grown to love. It’s a “song first, production later” approach at creating music that may bring some ears back to an earlier time in the duo’s existence. “There’s a certain simplicity in these new songs that remind me of the first few Cherub records,” says Jason.

There’s no doubt that the latest Cherub efforts will win over their existing audience and draw new listeners to their established brand of debauchery. From your ears to your heart, like searching for room on their bodies for a new tattoo, they’ll find a way.