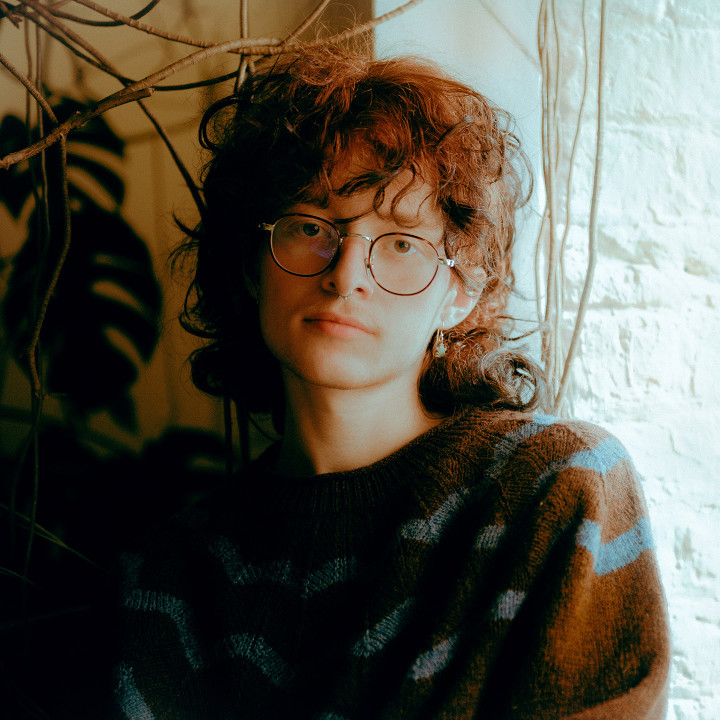 For 23-year-old singer/songwriter Cavetown, making music typically involves excavating and exposing his most deeply hidden thoughts and feelings. "It's a weird dynamic because a lot of the time I'm taking something that it's hard for me to admit even to myself, then putting it into a song and sharing it with the entire world," says the London-based artist otherwise known as Robin Skinner. Since self-releasing his debut single at age 16, the Cambridge-based musician/producer has proven the disarming power of that outpouring, steadily amassing a devoted following and bringing his extraordinarily close-knit live show to venues across the globe. On his new album worm food, Cavetown delivers his most elaborately realized body of work to date, shaping his idiosyncratic storytelling into songs that ultimately give voice to our own most intimate emotions.

The follow-up to his 2021 EP Man's Best Friend, worm food arrives as Cavetown's latest full-length since his major-label debut Sleepyhead, a 2020 release that inspired NME to hail him as a "bedroompop hero building worldwide community." As with all his output, Skinner produced the album on his own at his home studio, holing up in his garage and infusing his understated alt-pop with a powerful new vitality. "All these songs were written with the live set in mind, which I hadn't thought about much before," notes Skinner, who performs live with a full band. "It was fun to imagine how something might come to life onstage, and to think about how I might interact with the audience at different moments." But while worm food encompasses a more expansive sound than his past work, each track sustains the raw sincerity that's earned admiration from the likes of The 1975 and found him collaborating with such acclaimed artists as chloe moriondo and beabadoobee (who recently teamed up with Cavetown for his early-2022 release "Fall In Love With A Girl").

On the album's lead single "1994," Cavetown presents a formidable introduction to worm food sonic landscape, offering up a wistful piece of pop-punk driven by his mercurial guitar work. Graced with an exquisitely tender vocal performance from Skinner, "1994" once again reveals his rare ability to spin his unsparing introspection into impossibly catchy rhyme (from the first verse: "I'm tryna love the person I was when I was born/Hating on a kid doesn't serve me anymore"). "I think most people forget they're still the same person as when they were just an innocent child," says Skinner. "That song is about trying to allow yourself the same compassion and forgiveness you'd have for a little kid if they'd made some kind of mistake, instead of beating yourself up over it."

One of the more lighthearted moments on worm food, "Frog" emerges as a delightfully warped declaration of affection. "'Frog' is about my girlfriend," says Skinner. "When we first started dating we were both too nervous to say the words 'boyfriend' and 'girlfriend,' so one day I said to her, 'Did you know that "BF" and "GF" stand for "boy frog" and "girl frog"?' That was my silly way of asking her out, and now it's our nickname for each other." Laced with his sweetly off-kilter lyrics ("I'm gonna tell you you're pretty/Till it makes you sick"), "Frog" unfolds in gauzy acoustic-guitar tones, then drifts into a bouncy synth line that Skinner refers to as "the frog solo." "I had the idea to put this frog-sounding synth in the middle, in the hopes that it'd be fun to get everyone to hop up and down like a frog when we play that one live," he says.

All throughout worm food Cavetown gracefully amplifies his vast inner monologue, often uncovering entirely unexpected ways of expressing the most familiar of feelings. On "Juno," for instance, he precisely captures the inertia of depression while sharing a dreamy serenade to his beloved cat. "If I'm having a hard time and struggling to find a reason to get out of bed, there's always the need to get up and feed Juno her breakfast," says Skinner. "So no matter what else is going on in my life, she always gives me that sense of purpose." Spiked with brooding guitar riffs and loopy synth lines, the slow-building "Worm Food" transforms his existential angst into a strangely exhilarating anthem. "It's about feeling so small in the context of the world around you, and recognizing that in the end we all end up in the same place," says Skinner. "It might be a pessimistic way of thinking, but it's comforting to me in those moments when I'm worrying so much about things that maybe aren't that important." Meanwhile, on "Heart Attack," Cavetown shares an up-close portrait of anxiety and self-doubt, intensifying the track's unhinged energy with pogo-ready rhythms and a galvanizing guitar solo. "I wrote that after touring in South America, where the crowds were very excited -- which was really cool, but also overwhelming," says Skinner. "'Heart Attack' is about feeling pressured to put on a great show while looking after all these kids in a room that felt out of control at times, and questioning my ability to balance all that."

Although Skinner tends to write in solitude, a number of songs on worm food arose from his collaboration with other musicians. To that end, "Wasabi" features a guest appearance from his mother, a Baroque flute player who lends the achingly bittersweet track a certain enchanted quality. "I wrote 'Wasabi' after going to L.A. to visit a girl I had a massive crush on, trying to process the fact that I still had a thing for her even though I'd tried hard to get over it," says Skinner. On "Laundry Day," he enlisted a string quartet to magnify the melancholic mood at the heart of the song, a gorgeously sprawling piece penned after a difficult family trip. "That song is about some hard times my family's gone through, but the chorus came from a fond childhood memory of mine, where my dad would always end up shrinking all his clothes every time he did the laundry," Skinner reveals. And for "Kill U," he worked with Pierce the Veil's Vic Fuentes to sharpen the song's arrangement of serpentine guitar lines and combustible beats. "'Kill U' is about wanting to kill particular parts of yourself, and finding more of those parts as you get older," he explains.

An innately DIY artist, Skinner first discovered the depths of his imagination as a child, when he'd write and illustrate his own storybooks. After taking up guitar, he began writing and recording in his bedroom in his early teens, then releasing his lo-fi yet emotionally intricate songs on Bandcamp. Not long after the arrival of his 2018 album Lemon Boy, Cavetown inked a deal with Sire Records and started selling out venues across the U.S. and U.K. as well as performing at festivals like Reading & Leeds and Lollapalooza -- all while forging such an intensely personal connection with his audience that he's taken to keeping a cupboard full of letters received from fans. With his past triumphs including producing for artists like Tessa Violet and mxmtoon, Skinner also brings his immense creativity to the visual element of his output, an endeavor that recently found him co-directing the fantastically surreal video for "1994" alongside Lorenzo Diego. "It's inspired by The Little Prince, which is the story of a kid who lives on a planet by himself and doesn't want to grow up," says Skinner. "In the video I'm portraying the Little Prince, but instead of rejecting adulthood I'm getting ready to let go of childhood, and trying to build a rocket to fly away from my planet."

While worm food in many ways marks a major leap forward for Cavetown, the album took shape from the same instinctive approach he's embraced since earliest days as a songwriter. "Most of the time I think up lyrics without really trying -- they just fall out, and then I realize that they're expressing something I'd been having a hard time trying to articulate," says Skinner. "Over the years I've had people tell me that my songs have had the same effect on them, where there's something going on in their head that they haven't been able to verbalize but then the song helps them to finally understand it. So even though I write songs for myself, as a way to process the things I'm struggling with, it's really nice to know that they might end up helping people in some way."