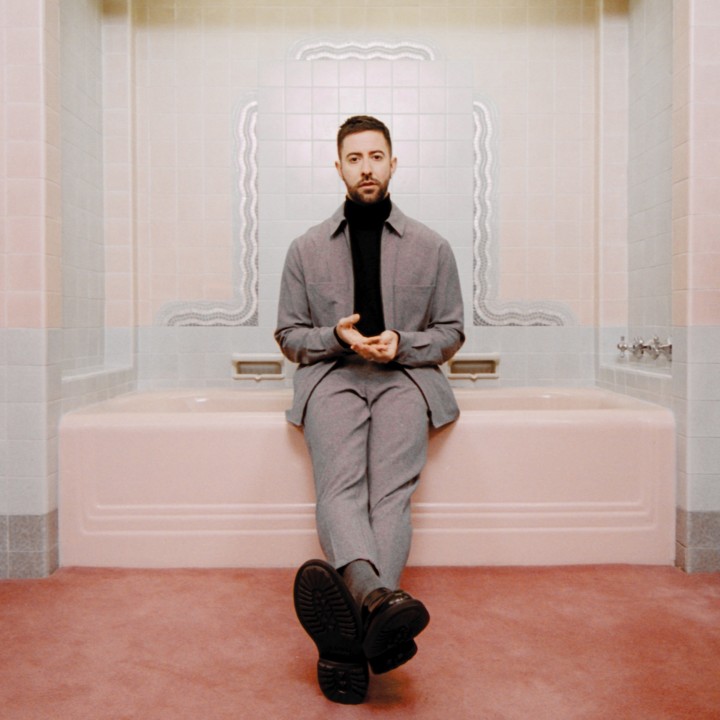 Bruno Major can, and does, take inspiration from everything and everyone. But mostly, fundamentally, he takes it from within. A guitarist from the age of seven, a songwriter from the moment he landed in London from Northampton, a singer when he realised no one sung his songs better than he did, Major is a musician, a storyteller, a romantic to his core.

All of which is gloriously woven together on To Let A Good Thing Die, a 10-song collection that beautifully encapsulates Major's devastating way with a wee-hours, big-emotion moment.

As he says by way of describing the lead single and opening track: "'Old Soul' is an ode to an immediate post-break-up, self-pitying, stay-in for three weeks and eat-Uber-eats-three-times-a-day wallow. We've all been there!" he adds with a laugh.

"I came up with the main drum beat on an actual drum kit, which was a first for me. Then [co-producer] Phairo and I built the arrangement from there. I wrote this song with Xamvolo in my kitchen -- it was originally on guitar, but this version is heavily drum and bass led. It's a new feeling for me, and I adore it."

The album is a follow-up to 2017's year-in-the-making A Song For Every Moon -- a vaultingly ambitious and beautifully realised concept album of sorts which began with the Englishman releasing one song over the monthly course of the waxing and waning of our nearest planetary body.

It was, too, the idea roared: by word-of-mouth and share-of-playlist, Major's music went everywhere. To date, A Song For Every Moon's 12 tracks have been streamed over 400 million times. And it took him round the world: as well as supporting his friend Sam Smith on a UK arena run, Major's has toured all over the world, his international footprint wide and far-reaching.

Mentioning his glorious cover of jazz age-standard Like Someone In Love on his last album, he says: "Now there are 4000 Indonesian 16-year-old girls singing a song written in the 1930 by an American guy! That's fucking cool."

Major has been doing this -- dreaming of this -- since childhood.

"I've never really done anything else," he begins. "Originally I wanted to be the best guitar player in the world. So I'd do seven hours a day, bunk off lessons, hide in the music block, play guitar, play piano.

"Then I moved to London with the intention of playing with Elton John or Tom Waits or Stevie Wonder -- a proper legacy artist."

Along the way he became an accomplished jazz musician. Major knew the chords, the scales, the songbook, Jerome Kern, Cole Porter, "all the guys who wrote the big showtunes."

Crafting a minimal, modernist style drawing on a love for, and understanding of, the Great American Songbook, he started putting his songs on Soundcloud.

"I didn't have anyone to sing them, so I sung them myself. I very quickly got a publishing deal, and I was gonna be a songwriter -- and I was a songwriter for two years. But then I got a record deal with Virgin."

He relocated to Los Angeles and spent a giddy eight months making an album with a bunch of "crazy cats: Pino Palladino on bass, Jason Rebello on keys, Ethan Johns producing. It was the dream situation."

It was also the situation that so often goes belly up.

"Funnily enough, it did go belly up!" he laughs. The only fruits of that album were a live EP, followed by two years' stasis.

"I came back to the UK and was just stuck in this deal. Between 24, 25, 26 I was just writing -- about 400 songs to date! But it fucked me up. I couldn't release anything, so I got a job writing music for a theatre company in Windsor for Shakespeare plays."

Luckily, the slings and arrows of outrageous fortune proved a godsend.

"I think it was being surrounded by Shakespeare's words that unblocked me. I started writing again, went back to LA, and took some DMT." One plant-based hallucinogenic trip later, "it gave me faith again in myself as a person, and a songwriter. And I started out writing and releasing song every month, collected those, put them out as A Song For Every Moon."

He put his heart and soul on the line. And his wallet. Well, his manager's. "He lent me some money and said I could pay him back from the profits. Which I didn't believe would ever happen. But it worked out. As everyone says: the bad stuff can be the best thing that ever happened to you. Now it felt like my pipe dreams -- kid from Northampton getting a deal and releasing music -- was doable"

With a successful, wholly independent release under his belt, and buoyed by a blossoming international fanbase, Major began touring in January 2018 and has barely stopped since, he's sold over 50,000 tickets across Europe, Asia, Australasia and North America. Spring 2018 was when he hit some of the UKs biggest indoor venues with old friend Sam Smith. "I had a sick time" he adds with a grin, "and I'd totally do it again."

In early 2019 he began to focus on his next album. He spent the first three months of the year back in LA. He worked with Emily Elbert, with whom he wrote 'Easily,' the breakout track from the debut album. And he connected with Billie Eilish's brother and songwriting/producing partner. Finneas O'Connell got to know Major's music after his sister posted another A Song For Every Moon track, 'Places We Won't Walk,' online. When Major pitched up in LA again, Finneas reached out and asked if he wanted to hang out.

"He's one of the best, man. We got in the studio and immediately hit it off. He's just a sick guy, very intelligent, very talented. There's a lyrical prowess to him and a deep intelligence to him that belies his years -- and we connected over his love of words. We wrote a few songs, and hopefully we'll write more, but 'The Most Beautiful Thing' is the one that stood out."

The track, a hazy, gauzy love-note, became a cornerstone song of the album to come. The rippling, acoustic guitar-led 'I'll Sleep When I'm Older,' also written on that trip, was another.

"It's a bit of a sidestep to the rest of the album in terms of the subject. It was this feeling of being in my prime, scrabbling around, looking for experiences, and having to do as much as possible."

Back in the UK, the album was completed in "three months smashing it out with my friend Fin, that's Phairo, in his studio in his shed in his garden in Acton.

"It's all very low-key -- just one microphone. I wanted to stay true to the method of the first album. I had no budget for that, so one microphone in my kitchen was all I could afford. I wasn't about to go into Abbey Road and score some bagpipe solos!"

There was conceptual method in that approach, too.

"This album is an extension of the first album. A conclusion of the process I'd been through with Virgin and the album that never came out, and A Song for Every Moon. The reason I call it To Let A Good Thing Die is because it's a closing of a chapter in my creative journey. The next album will be a new line on my typewriter."

But that's a ways away. First Bruno Major has to make hay while the heart breaks. To Let A Good Thing Die is also the narrative of the ups and downs of a relationship.

It begins with a sleepy lovenote from his ex-girlfriend on 'Old Soul,' a reflection on the period of transience and lethargy which often emerges after a relationship has ended, and the acceptance of one's new reality sets in.

It takes an imaginative leap in 'Regents Park,' which elegantly evokes a song from the golden age of cinema with good reason: Major sampled the piano from the beginning of 101 Dalmatians. Pongo is looking out the window at London's Regents Park, trying to find a girlfriend for him and his owner Roger. Then he drags Roger to the park and they meet Anita.

But as Major points out, the song that Roger plays is 'A Beautiful Spring Day,' written by George Bruns, a major composer for Disney who was nominated for four Academy Awards.

"So I've written lyrics to that which are basically a realistic ending to 101 Dalmatians, where Anita turns out to be a heartbreaker who fucks Roger over and takes him back to the park and breaks up with him. It's tangentially about my relationship at the time with a similar girl."

There's another inspired backwards nod in the skeletal, leaned-in cover of Randy Newman's stop-you-in-your-tracks 'She Chose Me.'

"He's my number one all-time hero. He's the guy that got me into songwriting, and taught me that you didn't necessarily have to write about love. That it was important to keep a sense of humour in your writing. That songwriting could be intelligent, and that you could implement jazz harmony into a classic song structure. He's the biggest influence on me by far."

You sense that Newman will repay the compliment when he hears (as he surely will) the closing title track. It's a stately piano ballad, the melodic and emotive riches bursting from the spaces.

"That was the last one written for the album. Fin sent me a poem after he'd broken up with his girlfriend with the title To Let A Good Thing Die. I helped him finish it, then wrote the piano part. It ties back into the idea of the closing of the chapter, and to that emotional journey of a relationship. It's accepting the ephemeral nature of life, the fleetingness of existence."

Maybe so, but this is also music for the ages. To Let A Good Thing Die is both timely and timeless. Music drawn from the past, digging into the emotionally turbulent present, but then leading us hopefully into the future.

That's what I'm saying, anyway. Bruno Major is too down-to-earth and humble to make any such grand proclamations.

"Ultimately, all I care about is this album being 50 minutes of music which people can hear from start to finish and feel that it's honest and warm, and that it's true to its aims and ambition. It's a personal catharsis."