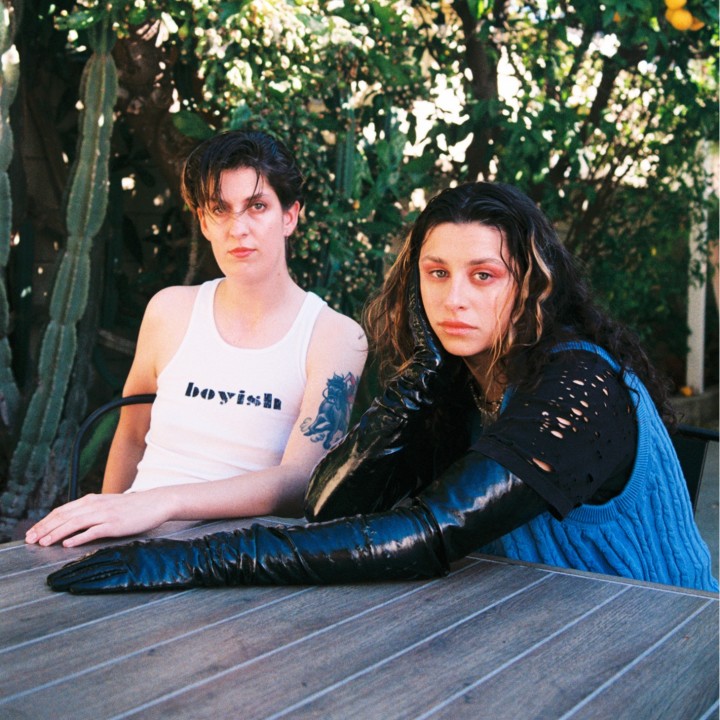 Boyish was formed by India Shore and Claire Altendahl in 2016. They met at Berklee College of Music when India needed a guitarist for an audition tape and Claire volunteered. Their musical compatibility quickly became apparent and they started collaborating soon after under the name “The Blue.” The duo went on to write and produce their debut project Carnation in 2018, which The New Yorker described as “looking uncertainty straight in the eye in songs that are confident in their musicality even when tackling themes of angst and doubt.” Carnation was nominated for Alt-Country Album of the Year at the Independent Music Awards.

After graduating college in 2019 and feeling the need to start over they changed their name to Boyish. They released their sophomore album Garden Spider on Valentines Day of 2020, which according to Atwood Magazine is “an immersive ten-track indulgence of introspection and inner angst channeled through a colorful, raw indie rock lens,” or as Claire calls it, a declaration of “Big Gay Sadness.” The album has amassed over 4 million streams and the title track “FUCK YOU HEATHER” was featured on editorial Spotify playlists such as “Fresh Finds Best of 2020” and “Undercurrents.”

Boyish released their most recent EP We’re all gonna die, but here’s my contribution on May 28th of 2021. The project has been streamed over 2 million times and received praise from publications like Nylon, NPR, Ones To Watch, Them., The GLAAD Wrap, and Lyrical Lemonade. They were also a recipient of the LGBTQ+ Emerging Artist Award presented by the Music Forward Foundation and were the first band to join the Bandsintown Big Break Class of 2021. Boyish closed out the 2021 by playing a myriad of shows, opening for artists like Spill Tab, Ella Jane, and Gully Boys across the country. They also released the lead single from their upcoming EP, “Smithereens” on December 3rd, 2021. The track received placements on Spotify editorial playlists like New Music Friday, Lorem, All New Indie and was featured in Billboard, Paper, and Office Magazine. Looking ahead to 2022, Boyish is gearing up to open for Remo Drive on a 17-date tour run and is then heading to South by Southwest to play an official showcase in March.