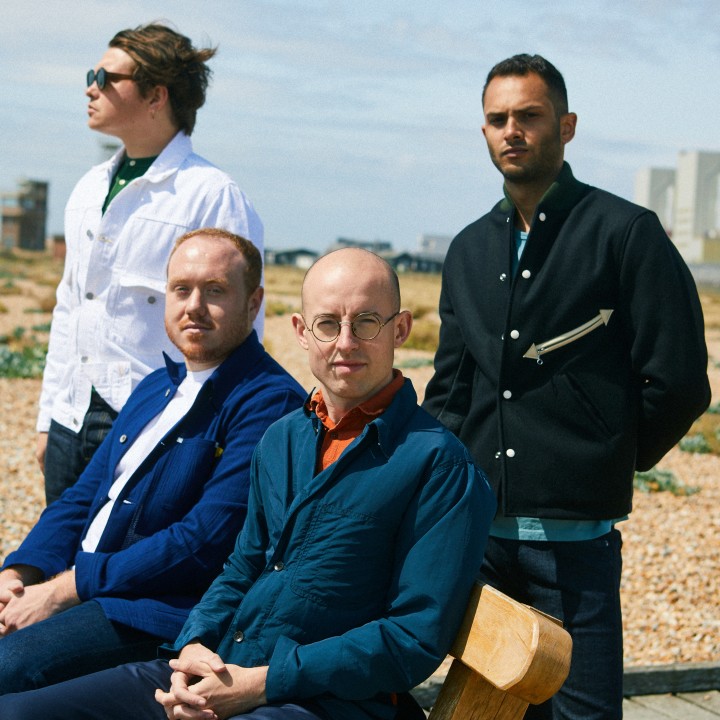 It might seem odd to describe Bombay Bicycle Club as veterans given that nobody in the band is older than 24, but this is the London quartet's fourth album, each one more successful than the last, which is a notable achievement in today's climate of rapid ascents and sudden declines. Their steady rise is something that rarely happens anymore -- a band given space by their label, Island, to evolve unpredictably with each release and take their audience with them.

So Long, See You Tomorrow is their richest, boldest and most euphoric album yet, and their first UK number one. This autumn, following a string of international festival appearances including Glastonbury, Reading/Leeds, Latitude, Fuji Rocks and Lollapalooza, the band will play their first ever UK arena date at London's Earls Court. They have a healthy, ever-growing following in continental Europe and the US, too, with all of their dates having sold out. The more risks Bombay Bicycle Club take, the bigger they get.

"I feel like we've found the balance, making it interesting and intelligent but not highbrow or elitist," says frontman Jack Steadman. "You want to satisfy the people who like the technical side of music but someone listening on the radio should be able to sing along."

Bombay Bicycle Club are Jack Steadman (vocals, keyboards and guitar), Jamie MacColl (guitar), Suren de Saram (drums) and Ed Nash (bass). They grew up in north London and signed to Island after leaving secondary school at 18, releasing their guitar-driven debut, I Had the Blues But I Shook Them Loose, in 2009. Their second album, Flaws, in 2010, saw an unexpected change of direction: folky and intimate, it was nominated for the Ivor Novello for Best Album. Their third album in as many years, A Different Kind of Fix, arrived in 2011. Living up to the title's promise, it was a dramatic departure, with agile rhythms, sampled loops and vertiginous swirls of guitar.

So Long, See You Tomorrow is yet another leap forward, a beautiful collection of songs that owe more to experimental electronica than to indie-rock. In fact, the whole album is one giant loop, because it is bookended with the same melody -- the beatific title track effectively segues back into the surging, string-laden opener, Overdone. Compounding the sensation is the last lyric the listener hears: "Keep going round and round and round..."

Jack, who writes all the band's songs, can trace his absorption in loops to the first music he made as a teenager, using a simple pre-GarageBand software program called eJay. "Everyone talks about how our albums have been different, but from my point of view, this was there the whole time," says Jack. "I started recording music at 15 on my computer and it was far more experimental than any of the Bombay stuff." (This he attributes to "getting into stuff like Boards of Canada and discovering psychoactive drugs -- a lethal combination!")

Rhythm is the key to So Long, See You Tomorrow. The show-stopping first single, "Carry Me," is a tough, restless dance anthem, its vocal refrain looped like a sample. Echoing the album's theme of circularity, the interactive video, which allows viewers to animate the band, was inspired by the great 19th century stop-motion photography pioneer Eadweard Muybridge.

Second single "Luna" has a slippery, sun-kissed ambience, opening with the busy patter of tablas. The Indian influence is even more prominent on third single "Feel," expanding on a snake-charming melody from the 1954 Bollywood movie "Nagin" with thick electronic bass and an explosively optimistic chorus. The video was shot in India and has a Bollywood theme. "Eyes Off You" is a piano-driven festival torch song fluctuating between turbulent peaks and glittering pools of melancholy. "Home By Now" bathes in harmonies as folk meets hip hop, while "It's Alright Now"'s tender sentiments are offset by bracing marching-band percussion. The sighing melody of new single "Come To" slowly blossoms into starry-eyed shoegazing textures and consoling harmonies.

So Long, See You Tomorrow was heavily influenced by the cultures that Jack experienced during a series of songwriting tours. He travelled, often by himself, to India, Japan, Turkey, the Netherlands and around the UK. "It made me happy," he says. "And when you're feeling good you're going to start creating things. I need to be feeling energetic to write new music."

Sometimes he would remain in a country after the band played a show and immerse himself in the local culture, as he did in India. At other times he selected places randomly on holiday-lettings websites and took himself off to see what happened. This led to a spell living with a family in the middle of the Turkish countryside. "I turned up with all my equipment and stayed for three weeks, and ended up feeling like this weird adopted kid." [At one point he was taken to a travelers' camp because they were the only people for miles around to have a drum kit he could borrow, and they turned out to be dazzlingly accomplished folk musicians who performed especially for him, although the drum kit turned out to be "the worst I have ever seen in my life".]

So Long, See You Tomorrow was written and recorded between May 2012 and October 2013 and produced by Jack in the band's own London studio, a decision he took because he was fed up with being "incapable of describing what I wanted with words. You just end up sounding like a terrible A&R man." The album was also partly recorded in north London's famous Konk studios and engineered and mixed by Mark Rankin (Adele, Plan B, Queens of the Stone Age, Florence & the Machine), with vocal contributions from regular collaborator Lucy Rose and impressive newcomer Rae Morris.

"I think there's a romantic side to the album, although I always try to leave the meaning of a song open," says Jack. "When I write it's very much a stream-of-consciousness thing. I think maybe the audience can be the psychologist that analyses it for you...'"

"We want people to interpret the lyrics in their own way," says Jamie. "I do think it ties into our lack of cynicism though. More than on any of our other albums there is a feeling of hopefulness."