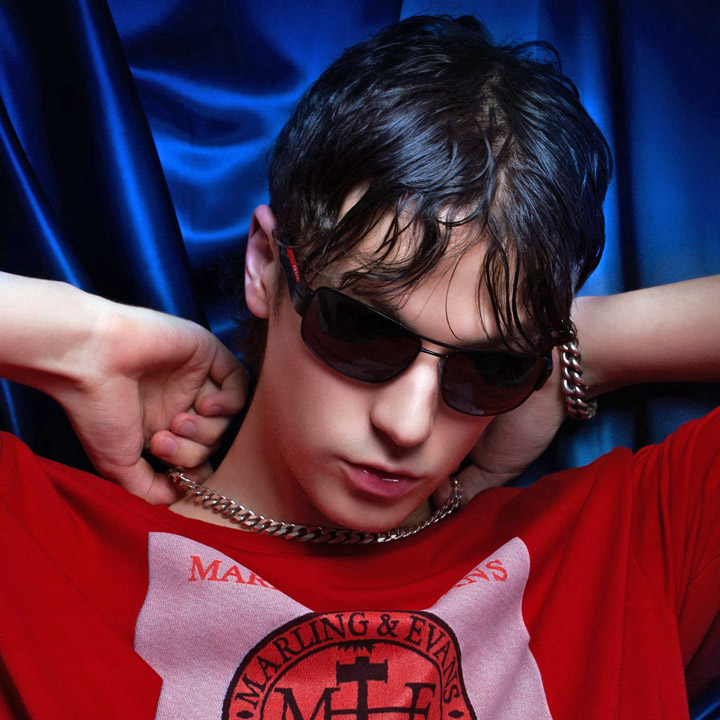 The world is a trash island. You have the power to create your own reality. Bladee first started gaining notoriety in 2013 for his self-released, emotionally charged take on rap; growing up in Stockholm and thus completely detached from any sort of rap tradition, he was left to invent a new one - patching together a variety of disparate internet influences with his own vibrant imagination, creating a new wave of uncanny and immensely influential, highly unclassifiable type of music - by himself of together with the Drain Gang crew (consisting of Thaiboy Digital, Ecco2k and producer Whitearmor).

Since then, Bladee has released three mixtapes, five EPs, four collaborative projects, and two studio albums, each adding a new chapter to his ever-growing mythos as well as providing a genrebending blueprint for the next wave of online based introverts to follow; the sound extends from the murky lo-fi of his first mixtape, 2014’s Gluee, to the frostbitten futurism of his 2016 debut album Eversince, and the PC Music-meets-Young Chop melodic sweetness of his most recent solo project “Icedancer”.

His worldbuilding -- a mixture of both aspiration and real life -- is part of what makes Bladee’s music unique, bringing out a wide spectrum of emotion between slow burning, susceptible ballads and highly charged pop hybrids, usually steered by the progressive instrumentals from his go-to producers Whitearmor, Yung Sherman, Gud and Ripsquad.

In addition to his musical output, Bladee creates multimedial visual art (recently exhibited at The Residence gallery in London), which frequently appears as cover art for his and other artists musical releases, and he also serves as the creative director for Yung Lean’s clothing line Sadboys Gear and it’s various collaborations with brands like Converse and New Era. Bladee is notoriously enigmatic; his lyrics are abstract, his visuals cryptic, and yet he is perhaps best described as an artist that find happiness by just to putting out a certain, peculiar energy - always attached to the idea of creating something truly beautiful, to follow his inner light and to constantly evolve.