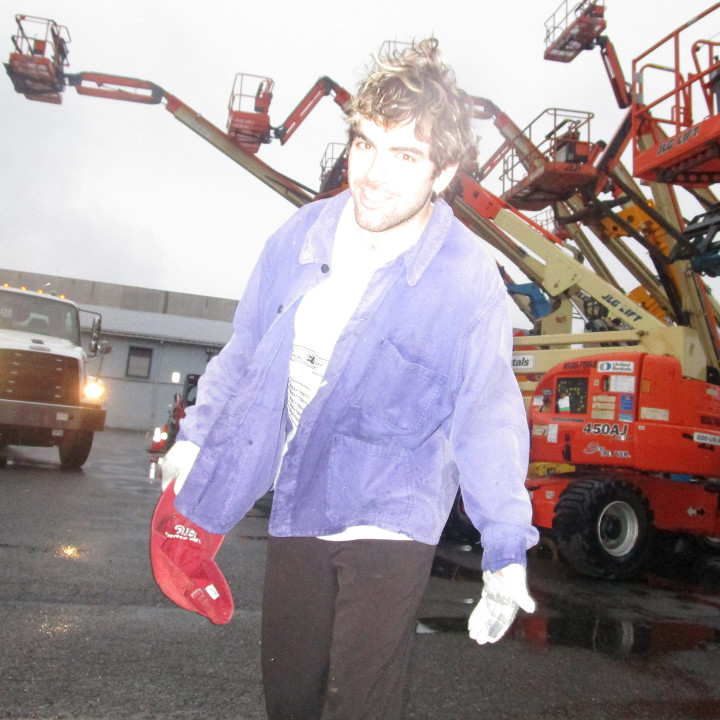 Beshken's sophomore record Pantomime embraces, if not praises internal contradiction. Likening itself to the split personality of a clown; a reclusive performer and an outcast entertainer, a dreamer but a misanthrope. The music explores the authentic self and artistic persona blurring the reality of the creator. Ben Shirken's work as Beshken began to draw attention when he was just 16, quickly becoming their full-time career. Now 25, Ben finds himself trying to reclaim the project from his younger self. Ben partnered with Venezuelan visual artist Pedro Bello in developing an animated alter ego for the project named Mimo, or 'mime' in Spanish. A catlike jester who exists within a world of critical stares, his actions closely surveilled. The album artwork for Pantomime shows Mimo watched by his surroundings, a vortex of unblinking eyes. What might happen to him if the eyes surrounding him close or look elsewhere?

Where Shirken's earlier compositions might have steered toward trance-inducing patterns, Pantomime willingly roams into paradox through the introduction of live instrumentation. Much of the album came together out of improvisational jams with his past schoolmate from NYU Clive Davis Institute of Recorded Music and modular synth enthusiast Jason Park, Eastman-trained drummer Matt Bent, (whom he bonded with over a shared love for jungle and late 90s IDM), and classical pianist Jose Escobar. The group worked mainly out of their shared Ridgewood, Queens studio named 5950 where Shirken resampled, reconstructed, and remixed what they played.

"Will I ever see straight when I walk?" Ben wonders as he ambles over a rubbery bass line enveloped in siren-like synths on "M.I.A.." Throughout Pantomime, inward musings like these complement their sonic opposites on tracks like "Ella" and "Under Your Skin," where soaring melodies float over vast, breathable landscapes aglow with hope. This dichotomy between soul-expanding freedom and constricting self-doubt is the essence of what molds the record's multicolored atmosphere.

Pantomime is releasing February 18th, 2022 through MATH Interactive, a multidisciplinary label founded by musician ARTHUR that launched in 2021. Ben will also continue to work with and produce for artists at his studio 5950 while manning the decks for his semimonthly mix series 29 Speedway which has been featured on NTS and The Lot.

Shaped by his Los Angeles upbringing where jazz, hip-hop, and d.i.y. shows exposed him to the boundlessness of electronic music at an early age, Ben's work has also been featured by outlets such as Boiler Room, Office Magazine, Coeval, Noisey, and The Line of Best Fit. Pantomime comes after the release of Beshken's 2019 debut record Aisle of Palm, which he toured nationally with artists including Com Truise, Photay, and Altopalo.

Continuously reconstructing the live A/V show, Beshken has partnered with animation studio Laser Days (Jack Wedge + Will Freudenheim) in creating original animation that is performable within video game engines. Always looking to explore new creative terrain, Ben can be seen playing modular synths in a handful of New York based bands including Nu Jazz (an avant garde jazz-punk ensemble that includes all members of Deli Girls). Growing close with the Brooklyn animation scene, Ben continues to score animated short films. One of which, Dice, a short work by Spencer Sherk, was recently screened at BAM in Brooklyn. Collaborating with artists across various disciplines is a large part of Ben's new creative process, his work becoming increasingly more multimedia and interactive.