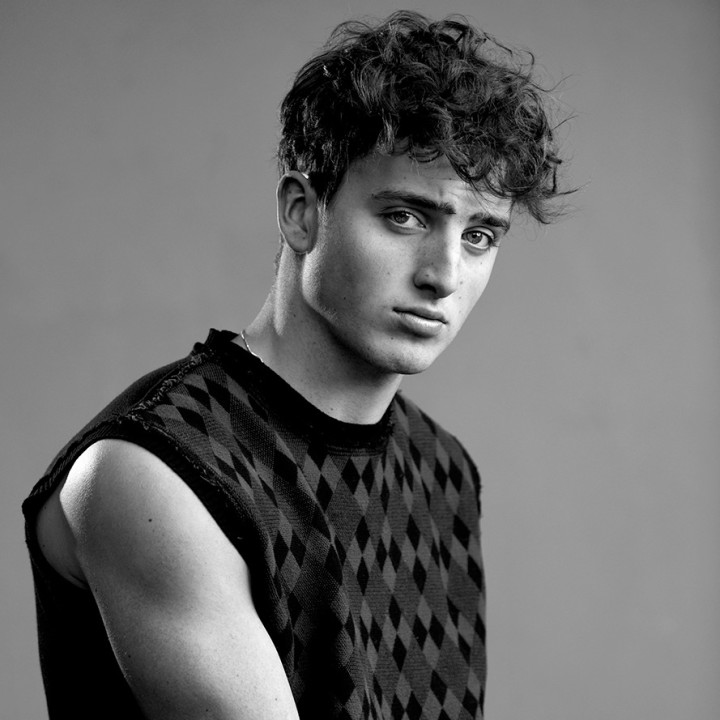 A need to connect authentically drives every aspect of Benson Boone's artistry. From his unflinchingly honest lyrics to hand-drawn artwork, there is no buffer between him and the listener. That's particularly true of "GHOST TOWN," the 19-year-old's astonishing debut single. A poignant piano ballad about moving on, this is the calling card of a major new talent. Incredibly, "GHOST TOWN" was one of the first songs Boone ever wrote. But the Monroe, Washington native has a habit of being very good at things without realizing it. In fact, his musical talent only emerged by coincidence when he was asked to sing in a friend's band. Now, he's making up for lost time. So much so that Boone plays multiple instruments on "GHOST TOWN" including the drums, guitar and piano, which he picked up by ear. The multi-talented teenager even drew the striking cover art. That desire for a genuine, unfiltered connection with fans is why he stepped away from American Idol, despite wowing judges at auditions. Instead, Boone connected with Imagine Dragons frontman Dan Reynolds. "It was our first writing session together when I realized [Benson] is a once in a generation talent," Reynolds says. While the newcomer is still at the very beginning of his music journey, he's in it for the long haul. Boone's goal is to make songs that stand the test of time. With "GHOST TOWN," the singer/songwriter takes an auspicious first step towards achieving it.

A need to connect authentically drives every aspect of Benson Boone's artistry. From his unflinchingly honest lyrics to hand-drawn artwork, there is no buffer between him and the listener. This is particularly apparent on "GHOST TOWN," the 19-year-old's astonishing debut single. A poignant piano ballad about moving on before love turns sour, this is the calling card of a major new talent. "Maybe you'd be happier with someone else, maybe lovin' me is the reason you can't love yourself," he belts over melancholy keys. "Before I turn your heart into a ghost town, show me everything we built so I can tear it all down."

The emotions that fueled "GHOST TOWN" were pulled from observing a friend's toxic relationship and the development of his own emotional maturity. "I saw the situation from an outside perspective and wondered what they could have done differently." Ultimately, the song is about making tough decisions. "Love can hurt more than it can help," the rising pop artist says. "Sometimes the best way of showing someone you care is by letting them go."

Incredibly, "GHOST TOWN" was one of the first songs Boone ever wrote. "I was in an Uber on the way to my first recording session in Los Angeles," he remembers. For inspiration, the newcomer skimmed through texts from his unlucky-in-love friend. "The melody and lyrics just popped into my head." Afraid to lose his train of thought, the teenager sang the chorus into his phone in the back of the car. "It was a little embarrassing," he laughs. "The driver wondered what I was doing."

It turns out Boone has a habit of being very, very good at things without realizing it. Growing up in Monroe, Washington, the budding hitmaker spent most of his time outdoors. In fact, his latent musical talent only emerged by coincidence. "I went to a Jon Bellion concert right before COVID," he remembers. "I watched him perform and felt like I understood him. It had a huge impact on me." Around the same time, Boone was asked to sing in a friend's band and wowed everyone including himself. "It's a once in a lifetime event to discover a hidden talent. It was so freeing to be able to express myself."

Now, the singer/songwriter is making up for lost time. "I want people to see that I take music seriously," Boone says. So much so that he plays multiple instruments on "GHOST TOWN" including the drums, guitar and piano, an instrument that he picked up by ear. Boone even drew the cover art. "I used white charcoal on black paper," he says. "The drawing took about five hours."

That DIY approach is also reflected in the "GHOST TOWN" video. "I didn't want to go with a typical love story," he says. Instead, the breakthrough artist went back to his hometown and hung out with friends. "We went cliff jumping and hiking, we went to lookouts," he says. "Just the normal things I did growing up." It's the kind of highly personal content he shares with fans on TikTok. "I started out posting funny videos and daredevil stuff," Boone says. Once the late bloomer discovered his singing voice, he started using the platform quite differently.

"Social media is the biggest opportunity to get people to know you personally," he says. "Hopefully, they will not only like my music, but they'll understand and like me as a person, so I'm more than just a song to them." That desire to connect with fans authentically is why he stepped away from American Idol, despite wowing judges at auditions. "It was a very hard choice," Boone admits. "I didn't really know who I wanted to be as an artist yet, and I didn't want to show the world someone I'm not."

It turned out to be a wise move. Shortly thereafter, he connected with Imagine Dragons frontman Dan Reynolds and was invited to collaborate with the chart-topping rock star in Las Vegas. "It was really scary and intimidating," he remembers. "But it was the greatest three days of my life." Before long, Boone had signed to his Night Street label in conjunction with Warner Music. "I knew Benson was special when I met him, he just draws you in," Reynolds says.

"It was our first writing session together when I realized he's a once in a generation talent," the Imagine Dragons hitmaker continues. "He has this innate sense of melody and vocal ability that blew me away." Reynolds has since become a mentor, sharing advice from his journey to the very top of the music industry including the importance of growing and evolving as an artist.

"As I develop, I'm going to move towards self-production," Boone says. "It's going to be an expression of what I feel, what I go through and what I'm thinking. I hope my music changes over time because I'm always changing." One thing that will remain the same is his emphasis on vocals: "The voice carries so much emotion." Citing artists like Lewis Capaldi and Adele as influences, the rising star wants to move people with his powerful pipes.

While Boone is still at the very beginning of his music journey, he's in it for the long haul. "Working hard and writing good songs are the most important things to me," he says. "I'm trying to learn as much as I can about who I am and what kind of music I want to write." His goal is to engage with fans authentically and make songs that stand the test of time. With "GHOST TOWN," the singer/writer takes an auspicious first step towards achieving it.