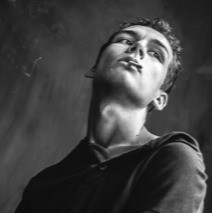 I never understood who I was, never thought I was good enough, never thought I'd get anywhere. In school I would draw all over the desks, all over my work, all over. I thought I may become a photojournalist, or make video games. I wanted to learn what life meant. Growing up my family was ethnically diverse. My grandmother was native to Algeria, my grandfather former Yugoslavia. My mother was born in France, my father Canadian. I didn't quite know where I belonged.

My father had this old Hewlett Packard computer with this bootleg copy of fruity loops, I'd spend hours making beats. I couldn't stop creating. I didn't start singing until after my mother's death, it was the only way I could unpack my emotions. I became colder than the winter that she left. I fell in a downward spiral and would eventually have to face the depression that swelled inside. I tried everything I could to numb myself to the pain but it only made it worse.

I began filtering my struggle into music, I felt repaired analyzing the things that tore me up. I began constructing a world that I could find solace in. The first song I had ever finished was BAD CHILD. I had written and produced it in 3 days and thrown it online. I moved to Toronto not knowing anyone, just on a gut instinct. I lived out of an old rehearsal space with a hotplate and an air mattress, and when the air mattress burst I slept on the floor. I made music everyday and lived on oatmeal and cigarettes.

That recipe got me through the first year on my own, I don't recommend it. It was the first time in my life I had a purpose. BAD CHILD took on a different meaning to me. It was about finding redemption in my failures. BAD CHILD is about not being good enough, not living up to expectations, it's about trying to be a better person.