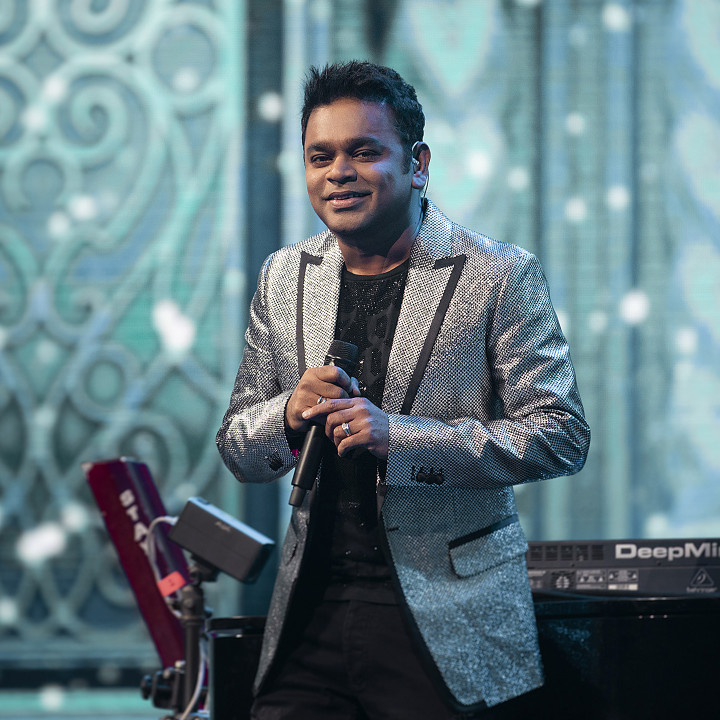 A. R. Rahman is popularly known as the man who has redefined contemporary Indian music. Rahman has scored for more than 150 projects, comprising of music in multiple languages, including landmark scores such as 'Roja,' 'Bombay,' Dil Se,' 'Taal,' 'Lagaan,' 'Vandemataram,' 'Jodhaa Akbar,' 'Slumdog Millionaire,' '127 Hours' 'Rockstar' and many more. Rahman pursued music as a career at a very young age taking after his father who was a composer and arranger in South India. After assisting leading musicians in India, Rahman went on to compose jingles and scores for popular Indian television features. He also obtained a degree in western classical music from the Trinity College of Music, London. In 1991, noted film maker Mani Ratnam offered Rahman a movie called Roja which was a run-away success and brought nationwide fame and acclaim to the composer. The composer is a six-time recipient of the Indian National Award and has bagged 32 Filmfare awards to his credit.

Rahman wrote the music for "Bombay Dreams," produced by Lord Andrew Lloyd Webber, grossing remarkable numbers at London's West End and Broadway. Notably, he also composed for the stage musical, "Lord of The Rings," along with the Finnish band, Varttina.

In 2008, Rahman's work gained global prominence with the extraordinary success of his score for 'Slumdog Millionaire' that won 2 Academy Awards for Rahman, for Best Score and Best Song. Rahman won over 15 awards for this score including two Grammys, the Golden Globe and the BAFTA. Rahman, marked his entry as a writer and producer, setting up his YM Studios Soundstage and of 99 Songs, his maiden film venture. He is exploring new ways of storytelling through "Le Musk," a cinematic multi-sensory project in progress, directed and written by him. He is in the process of setting up India's native Symphony Orchestra, through the AR Rahman Foundation and KMMC, nurturing young musicians to excel in music.

He is currently experimenting and researching on undisclosed projects based on Indian Classical music, finding ways to pass it on to the future generations. The KM Music Conservatory, under the able administration of his sister, Fathima Rafiq, imparts holistic education in western and Indian music and music technology.

His ongoing efforts with Intel have resulted in path breaking performance tools like "Curie." He is noted for collaborating with numerous international artistes, like Coldplay, Mick Jagger, Dave Stewart, Nusrat Fateh Ali Khan, Sami Yusuf, his latest collaboration with U2 and his daughters, Khatija Rahman and Raheema Rahman singing the ancient Tamil Couplets from Thirukural, resulting in the globally acclaimed single "Ahimsa," commemorating 150 Years of Mahatma Gandhi.

Currently, AR Rahman is working with Expo 2020 Dubai, having setup a state of the art recording facility, called "The Firdaus Studio," and mentoring an all-women orchestra comprising of incredibly talented musicians from over 23 nationalities called "The Firdaus Orchestra." AR Rahman joins hands with Shekhar Kapur and Expo 2020 Dubai to present an audio visual musical spectacular which premieres at the iconic Al Wasl Plaza in early 2022.