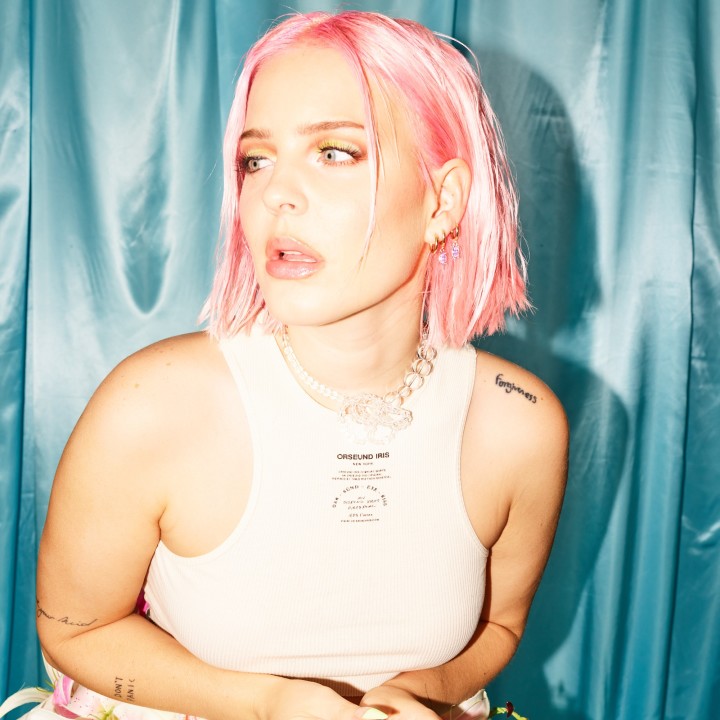 Platinum-selling, multi-talented Anne-Marie is turning it up in 2021.

Kicking-off the year as a new, and winning, coach on Saturday night prime time show, The Voice, Anne-Marie has been riding high in the UK charts ever since January following the release of her KSI and Digital Farm Animals collaboration 'Don't Play'; a track that not only spent a staggering 12 weeks inside the UK Top 10 Official Singles Chart, but one that has become the UK's biggest song of 2021 so far by a British female artist. And she's only just got going.

The Essex-born star has now completed putting finishing touches to her second studio album, of which details will be revealed very soon. "I am so excited for the world to hear what I've been working on. This album helped me on a journey of becoming a new, happier me and I hope it will make everyone feel good, or have a good cry, or scream a sneaky revenge tune out -- a song for every mood."

Anne-Marie's worldwide appeal is nothing short of monumental. A world-class vocalist who has five UK Top 10's under her wings, her unfiltered, honest approach has seen her resonate with fans across the world ever since she entered the music scene in 2015. She's one of those rare breeds of artist that's so relatable, her music makes you feel like you're conversing with your best mate, especially when it comes to relationship drama: "We all go through heartbreak at some point and it's important to talk about it. Recognise a bad relationship but also recognise that these feelings of heartbreak don't last forever and that you're not alone in what you go through."

Lockdown, it turns out, has unlocked a whole dimension for this unique performer in the way she thinks, the projects she takes on and her attitude to life. Now, she believes, it is time to make the most of everything. She says: "I feel that going through lockdown for me was like this huge slap in the face. It was pretty painful but on another level it really woke me up both as an artist and a woman. You are sitting there surrounded by so much fear and anxiety and you realise the only thing to do is to deal with it, push through it. I had to stop filling my day with distraction and figure out what really makes me happy.

"I suddenly had all this time to reflect on the past seven years of my life which have been pretty mad and deal with things that were holding me back or stopping me fully being myself. And now I feel excited about this year, and life in general. I still have anxiety but I'm dealing with it and yes, I feel good."

Anne-Marie, whose unique, striking voice first hit the music radar when she guested on tracks by Rudimental and went on to score a number one hit as the main vocalists on Clean Bandit's worldwide number one single, Rockabye. A former three-time world Karate champion, Anne-Marie's self-effacing attitude and anthemic, highly personal songs about being cheated on, body issues and gender free love made an extraordinary connection with millions of fans. Her first solo album, Speak Your Mind -- rammed with tracks to dance, laugh and cry to -- was the biggest debut album of 2018 in the UK and it swiftly propelled her into a whole new level of celebrity -- as a style icon, agony aunt and a woman fearless enough to tell the truth through exceptional tunes.

With no connections in the music business, no appearance on reality television, the girl who cut her teeth in small West End roles and performing with a soul covers band in her hometown of East Tilbury, Essex, Anne-Marie -- whose fans include Ed Sheeran and Marshmello -- admits nothing had prepared her for the onslaught of fame.

"I've always felt that everything seems to happen to me by accident. Major imposter syndrome. I'd never had a plan, other than to write music and sing which I'd been doing since I was a kid in my bedroom at home. And then everything got bigger and bigger and I was on stages playing to thousands of people and flying all round the world. To be honest it was overwhelming."

She later opened up about her struggle with anxiety which threatened to torpedo her fast ascent to the top; toured with her friend Ed Sheeran; won major TV, music and radio awards for tracks from 'Rockabye' to 'F.R.I.E.N.D.S'; and also took away the LOS40 International Artist of the Year and Artist of the Year 2019 at Stylists' Remarkable Women Awards.

But when Covid 19 hit, Anne-Marie was forced to stay still, stay home and start a process of creative introspection, which took her on a whole new journey of empowerment. During this time, she also recorded her first-ever documentary titled 'How To Be Anne-Marie,' that aired with YouTube last autumn.

She commented: "I've spent the past few years with a completely rammed schedule so you don't have time to think about anything. And I knew I was struggling with anxiety. I had a lot of issues with fame. I never sang because I wanted to be famous, I sang because I just loved singing and writing songs. And at first, in lockdown, I was really anxious. And then you think about everyone else. What other people are going through and you just give yourself a talking to. I made the decision to do my documentary which had me going back to some of the things in my past -- like revisiting my old school -- a place that I didn't have the best time at -- and remembering old times from where I grew up: it really put things into perspective."

"I loved going back to where I came from after spending all this time on planes and doing shows and putting myself under pressure in studios thinking every single song I made had to be a hit."

Speaking about seeking help for her mental health, she adds: "Whilst being in lockdown I realised I had LOTS of unresolved issues and I decided to start to have therapy and it's honestly changed my life. I have a therapy session once a week and I just talk about everything and anything, Things that have been bouncing around my head for so long. I'm so glad I've done it. I can feel myself changing for the better."

Anne-Marie offers us all a reminder of an escape from the darkness of lockdown and, with her new attitude, a reminder that life is still there for the taking -- and making: "One of the most exciting things I did last year -- it was part of my documentary -- was to perform on top of the roof of the O2. It was a freezing, stormy day, everyone told us not to do it but I've always been a rebel so I broke the rules and went out there and sang in the freezing wind and rain and it was magical; I felt so free."