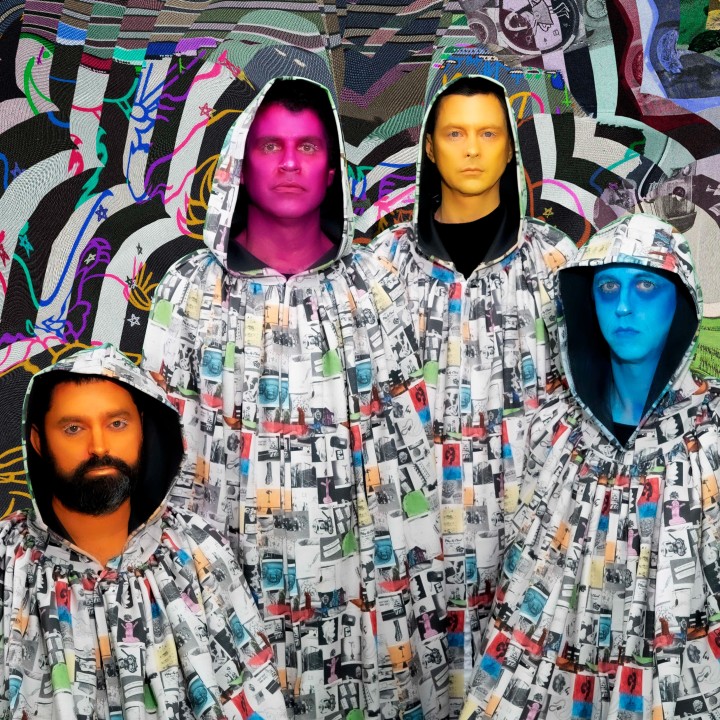 At the beginning there were two of them -- Avey Tare and Panda Bear -- banging drums and tweaking synths in their bedrooms, singing strange and sometimes heartbreaking songs about imaginary friends and childhood pets. Carried along by washes of squalling feedback, the music was noisy, and it was weird, but it was, at heart, pop music. This was the start of Animal Collective. For fifteen years Dave Porter (Tare), Noah Lennox (Bear), Brian "Geologist" Weitz and Josh "Deakin" Dibb have been rewriting the musical map, their line-up and aesthetic shifting with each astonishing release as they continue their pursuit of a new psychedelia. Their wild path has taken them from cramped concrete basement shows and forest floor singalongs to immersive installations at the Guggenheim and performances to millions on national television. So where now from here?

"Caveman circles," says Lennox, discussing the vision for their eleventh full-length album, Painting With; "Caveman circles, the first Ramones record, early Beatles and electronically produced. I think that was kind of our starting point." Dizzyingly upbeat and gloriously realised, their latest LP bounces and pops with an urgent, ecstatic energy, propelled by polyrhythmic beats and gurgling modular synth, with Lennox and Portner's vocals gleefully falling in and out of syncopation and off-kilter harmony. The songs are as experimental and deeply textured as anything that has come before but sound as sharp and snappy as chart hits, finding the band at both their most minimal and most ambitious: "The idea with cavemen was about being more primitive -- the way we sounded when we were first playing together in New York" says Portner. "I feel like what we were doing with the last record [2012's Centipede Hz] was something a little more complicated. This time we wanted to strip it down and simplify it, like techno and punk... And then put the Animal Collective filter on it all."

Working as a trio, Portner, Lennox and Weitz began trading demos in early 2015, pursuing a goal of what Portner calls "really short pop songs: no B.S, get in, get out material..." The three met up in Ashville during that Spring and began exploring the songs together. "I feel like lyrically there's some really tough stuff" says Lennox, "but the intention was for the songs to have the spirit of trying to work things out. To make things better." The group made a conscious decision not to tour the songs first in an attempt to keep them fresh, something Weitz found to be "a freeing process. That shift in perspective contributed to how much space is on the record."

Recording took place in the legendary EastWest Studios in Hollywood, home to sessions by The Beach Boys and Marvin Gaye. Making the space feel like home was essential: they lit candles on lily pads and projected a two-hour reel of dinosaur movies -- spliced together by Dave's sister Abby -- on a constant loop. A baby pool was set up to help add to the vibe of the room, but the group soon discovered it sounded amazing when thudded and treated with effects. "Everything sounded good in that room" says Weitz.

You can hear it. Everything about Painting With feels crisp and direct as though delivered in super high-definition Technicolor; the pitter-pattering handclaps of Lying In The Grass, the delirious arcade-hall rave of Burglars, the galloping bass and piano of the radiant On Delay -- even Bea Arthur's introduction to Golden Gal seems to shimmer. The interplay between Avey Tare and Panda Bear's vocals (recorded while sat on high pedestals to lend the singing an "airy" quality) is brought front and centre with an uncharacteristic clarity: "With the vocals, it's not like a typical call and response or harmony." says Lennox, "It's like two voices become one. Without one singer it doesn't really work the same way. They dance with each other." Portner interrupts: "Both vocals are meant to complete one thought." The band put much of this down to their close collaboration with engineer Sonny Diperri: "He played a big part in how the vocals sounded. We didn't put a lot of effects on the voices like in the past... We tried to be really careful about reverb, to not make everything washed out. When there is echo on the album almost everything is acoustic reverb. It attests to the greatness of those old studios -- it's cool you can record in your apartment, plenty of great music has been recorded that way, but there is something to say about the time that went into crafting these rooms. It feels like a lost art form."

In their search for more organic sounds, the trio challenged themselves to incorporate elements they usually find off-putting, either structurally or sonically "I remember specifically we brought up saxophone and brass instruments" recalls Portner. They enlisted the services of multireedist Colin Stetson -- whose resumé includes collaborations with Arcade Fire, Godspeed You Black Emperor, Bon Iver and Tom Waits -- to appear on the album's rapturous, swirling opener, FloriDaDa, an ode to breaking boundaries and not seeing any separation in people or places: "We were huge fans of Colin's and the sound that he has is super unique. We don't notate a score for somebody, so it was cool to have him come in and lay down a bunch of ideas while the song was playing." After discovering John Cale was a fan of their music, the group invited him down to the studio to record drones for Hocus Pocus -- a slow-burning collage of stroboscopic vocals and bleeping, squelching modular synth that gives way to delirious release. Discovering the song wasn't in a key the viola could be tuned for came as "a happy surprise" as they found themselves working with Cale's material in new and exciting ways, his bowed tones and electronic manipulations forming a hypnotic transition into the beautifully sun-warped Vertical.

It's just that that kind openness to playing with expectation and experimenting with form that lies at the heart of this personal and human album. "When we were doing (2007's) Strawberry Jam, I thought it would be cool to literally rename ourselves The Painters." recalls Portner, "Everyone kind of rolled their eyes at that one. But Noah brought the idea back [this time]. We talked about painting -- cubism, Dada, these distorted ways of looking at things..." It's all there in Painting With: the sound of artists finding vivid new ways to shape their ideas and challenge their own conventions, creating music that is at once startlingly fresh and still recognisably, uniquely Animal Collective.