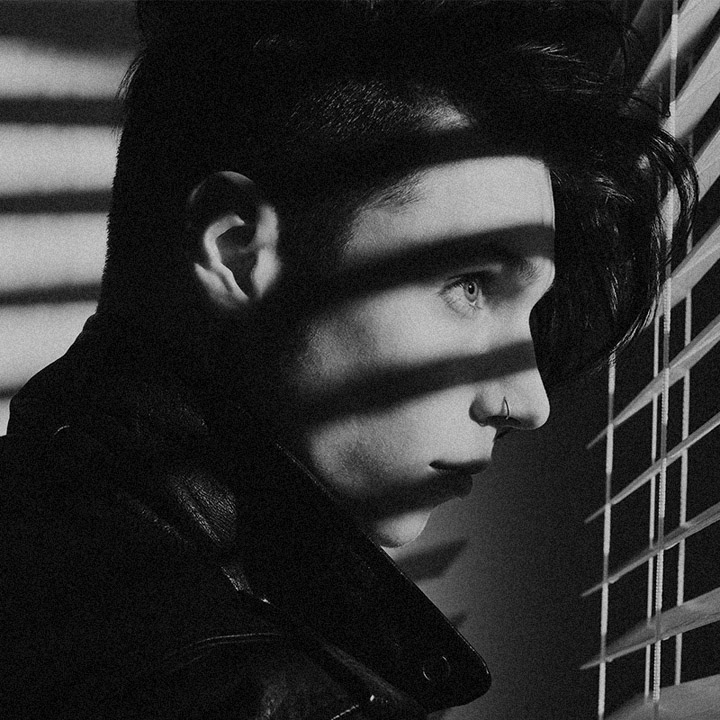 The debut album from ANDY BLACK combines timeless American iconography like crisp leather jackets, vintage Hollywood, teen idols, and rebels of every stripe with the broadminded arena bombast of sophisticated pop, the devilishly romantic seduction of dark-wave devotion, and the biting style of music's sharp-tongued and best dressed paramours, all within its ambitious sights and sounds.

ANDY BLACK's music is a reverently classic yet defiantly modern shot of melodic adrenaline across the bow of pop music and pop culture. It's reminiscent of the smartest and biggest hits of the past with a forward thinking observational heft, born from what is quickly becoming one of the most distinctive voices in modern rock music. Cinematic in scope, ambitious in concept, yet down-to-earth in execution, the ANDY BLACK album carves a brash new place for a bold new singer, using all the tools of pop craftsmanship and lush arrangements available.

Songs like "We Don't Have to Dance," "Put the Gun Down," and "Homecoming King" are readymade anthems embodying all that it means to be young, to be an outsider, to champion oneself and one's loved ones with a vulnerable but unashamed urgency. A living, breathing, walking tale of ambition and perseverance, the man behind ANDY BLACK (who fans around the world already know as Andy Biersack) grew up in the Midwest and moved to Hollywood at 18 to pursue his passions in the creative arts and the art of rock n' roll.

Biersack has graced the covers of Alternative Press, Revolver, and multiple other relevant publications around the globe as frontman for the band he founded, Black Veil Brides. Across four well-received albums and countless tours, BVB has flown the flag for aggressive hard rock, earning multiple Kerrang! and Golden Gods awards, to boot. Created in Southern California with mega-producer John Feldmann, Biersack's adventurous debut under the ANDY BLACK moniker features a rogue's gallery of hitmakers and alt-rock icons, all united in substance and spirit upon a singular line of melodic assertiveness and stylistic daring.

Feldmann's contirbutions to rock and pop have contributed to close to 40 million in album sales, working on Modern Rock and Active Rock classics from Panic! At The Disco, The Used, Good Charlotte, and Hilary Duff, to name a few.

Seamlessly finishing each other's creative sentences and fluent in one another's artistic shorthand in the studio, the pair labored to execute Biersack's ANDY BLACK vision with exhilarating swiftness. Many of the folks the duo enlisted to contribute are veterans of previous Feldmann records, including Ashton Irwin (5 Seconds Of Summer), Joel Madden (Good Charlotte) and Rian Dawson (All Time Low). Gerard Way of My Chemical Romance and Fall Out Boy vocalist/guitarist Patrick Stump were among the album's participants, as well.

The ANDY BLACK album is as decidedly personal for Biersack as his work in Black Veil Brides is outspoken, taking a further step outward with its intimate confessional vibe and galvanizing populism. Having toured the world, battled personal demons great and small, lost a good friend to sudden death, and grappled with the highs and lows and everything in between of his young career, Biersack has more to say than ever and it's even more relatable than before.

The mixture of the Golden State and the Heartland pumping through the veins of the man who assembled the ANDY BLACK persona and his resulting dark pop rock album -- music which lives somewhere between early U2, the most pensive yet spirited work of Bruce Springsteen, and English proto-punks-turned-pop-icons like Adam Ant and Billy Idol -- is something truly unique and powerful. It's not unlike the best of America itself: charismatic, creative, and dedicated.