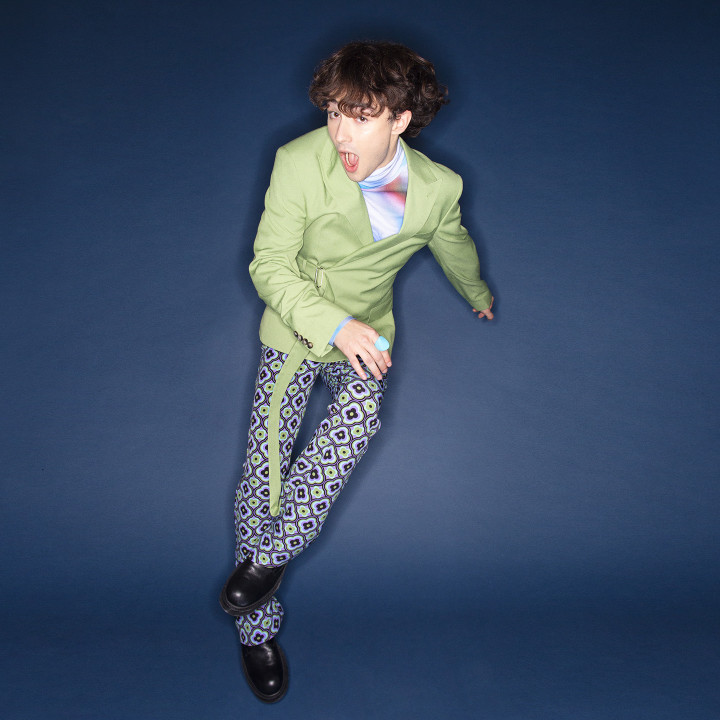 "Templeman's songs max on melody ... he has to be one to watch closely" - The Sunday Times Culture

"a soon to be international rising star" - British Vogue

Ever since releasing his first single 'Like An Animal' in 2018, Alfie Templeman has, with every thrilling move, cemented his position as the teenage icon of his generation. Combining indie-boy-next-door aesthetics with a peerless musicianship -- entirely self-taught, he plays no less than ten instruments and also contributes heavily to production on his still-TBA next project -- Templeman pushes boundaries like no other teenager. His love of universe building, both aesthetically and musically, shone through on 2021 debut mini-album Forever Isn't Long Enough and burns ever more brightly with '3D Feelings' and its accompanying visuals. Fresh, bold, youthful and inventive. Alfie Templeman sees an increasingly grey world in vibrant technicolour.

With well over 100 million streams under his belt already, Templeman's global appeal is reaching fever pitch. Every single from Forever Isn't Long Enough landed in the Music Moves Europe Talent Chart, with three singles featuring in the Top 20 concurrently at one stage. His next steps across the pond include a maiden US headline and support shows with fellow rising star Chloe Moriondo. Closer to home, Templeman headlines his biggest UK show ever at Shepherds Bush Empire, the apex of a first full tour which includes long-since sold-out shows in Manchester, Bristol and Brighton.

Racking up in excess of 137,000,000 radio impacts in the United Kingdom alone -- fuelled by the longstanding support of national networks BBC Radio 1 (where he has been daytime playlisted four times already in his burgeoning career), BBC Radio 2, BBC Radio 6 Music, Radio X, Virgin, and Absolute -- Templeman has firmly established himself alongside the most exciting (and the most established) names in British music. A spot on the 2021 BBC Sound Of and in the BBC's Brit List initiative earlier this year followed, of course, along with further 2021 tip lists with Radio X, Vevo, Amazon and MTV.

Templeman's sensational radio support has been compounded by swathes features and reviews from national tastemakers, including 2021 'Ones to watch' tips from The Independent, The Telegraph, The Sun, The Sunday Mirror and Huffington Post to add to previous accolades from The Observer, The Evening Standard and The Sunday Times.