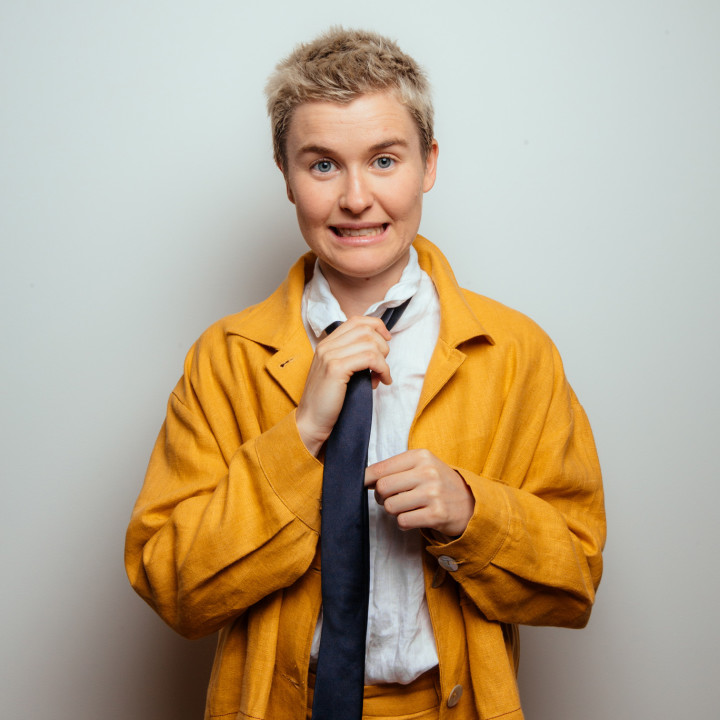 Alex the Astronaut has always had a supernatural knack for capturing human experience in song. Now, on her debut album, The Theory Of Absolutely Nothing, Australian singer, songwriter and storyteller Alex Lynn is delving deeper into what makes us tick more than ever before.

The Theory Of Absolutely Nothing explores friendship, love, loss, pain and change, weaving a constellation of stories about the personal reckonings that come with growing up. It’s something Alex has spent the last 18 months living through. “I transitioned out of college, I went through my first break-up, I lost a friend, and I got into my first proper grown up relationship, and I started seeing bigger problems in the world,” she explains. “All of these things made me feel like I know absolutely nothing when I thought I was in the know before. It’s been very humbling and eye opening.”

With her heart-swelling, folk-inflected pop, music’s bright-eyed anthropologist uses sprawling narratives and rich vignettes to unravel the joys  and struggles of everyday life. Brought to life with bright melodies, plucked guitar and Alex’s unmistakable vocals, The Theory Of Absolutely Nothing is the work of a storyteller attuned to the world around her.

And Alex has found a lot worth celebrating. Opening the album is her anthemic ‘Happy Song’, a bittersweet ode to “the awkward middle part of a break up” where you can see hope on the horizon, while ‘Christmas in July’ documents the delirious stupor of falling in love again.

It’s not just romantic love under the microscope – on the uplifting ‘I Think You’re Great’, Alex pays tribute to a friend who’s always been there. The song describes a cherished relationship in Alex’s life, but it’s also about the importance of checking in on each other, opening up conversations and supporting friends through thick and thin. “You don’t always have to smile/ You don’t only have to cry at night,” Alex sings. “I’ll be there again and again/ Because I think you’re great.”

But The Theory Of Absolutely Nothing doesn’t shy away from the bigger issues. ‘I Like to Dance’, Alex’s first single of 2019, turns the spotlight on the devastation of domestic violence. It tells the story of an unnamed, hypothetical couple, who represent the countless women abused by their partners every week in Australia. “You scream ‘Why don’t you leave!’ / My kids are two and three / I just can’t pay for what they need/ We both know he’d find me,” Alex sings.

On ‘Lost’, she turns the focus to unplanned pregnancies and abortion. It’s ostensibly the story of a girl and boy dealing with a difficult decision early in life but, Alex says, is also about “how big life events can drag you to grow up before you should have to.” Elsewhere, with candid introspection, she catalogues painful breakups, the grief that comes when we lose a friend and the fragility of health.

But even on the darkest clouds, there are silver linings. ‘Split the Sky’ is written from Alex’s experience of caring for someone close to her in a time of sickness. It was an overwhelming experience (“I wanted to go back to childhood joy and stop all this adult stuff from happening,” Alex says) but it was one that gave her a new perspective on life. “I think this songs is also a message of hope that no matter what happens you can go on to joy, happiness and calm – it just takes time.

The Theory of Absolutely Nothing follows two acclaimed EPs (To Whom It May Concern and See You Soon, both released in 2017) and a slew of big singles, which have had a way of landing at just the right moment. The track that started it all was 2016’s ‘Already Home’, which contains the now-iconic line “And there’s billionaires for presidents/ And parking fines at hospitals”. The following year Alex returned with ‘Not Worth Hiding’, an open letter to her 16-year-old self that details the journey to owning her sexuality, which arrived as Australia was debating marriage equality and became the unofficial anthem of the Vote Yes movement. It was played by none other than Elton John on his Beats 1 radio show and ranked at number 23 in tastemaker radio station triple j’s Hottest 100, the publicly voted poll of the best songs of the year.

Along the way, Alex has taken her music to the stages of international festivals like The UK’s Great Escape, Primavera Sound in Spain and Manchester’s Neighbourhood Festival. At home in Australia, she’s played Splendour in the Grass, triple j’s One Night Stand and a sold out national headline tour of her own.

From the get go, Alex the Astronaut’s music has dug into what makes us human. On The Theory Of Absolutely Nothing, she grapples with the multitudes of life on a bigger scale than ever before and emerges optimistic.