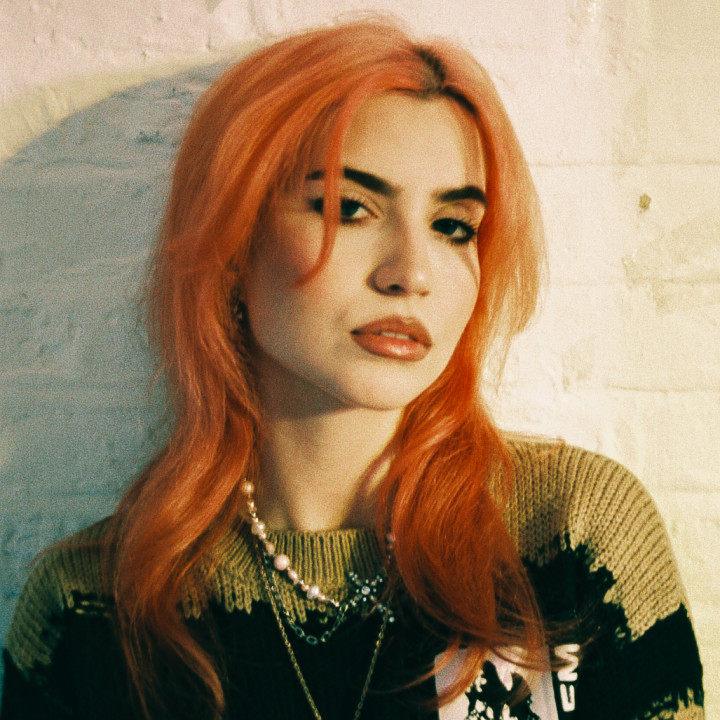 Let's get Abby Roberts' mind-boggling social media stats out of the way first. The biggest beauty TikTok creator in the world, she has almost 17m followers on that particular app. On Instagram she's sitting pretty at 2.7m, while over on YouTube she's currently on 500,000 subscribers. These numbers speak to the tenacity, work ethic and artistry of the Leeds-born 20-year-old, but for the next chapter in her young career they're essentially meaningless. Always looking for new creative outlets, Roberts now returns to a childhood obsession with music via the release of her lo-fi, bedroom pop-leaning, six-track debut EP, XXX. Anchored by the instantly anthemic, self-penned Paramaniac it showcases both Roberts' diverse musical influences (Lana Del Rey, Arctic Monkeys, Clairo, to name just three) and her deeply relatable, unwaveringly emotional lyrics ("I love telling a dark story but still making it a bop," she smiles). As with all aspects of her output, Roberts' music is led completely by her and her alone. "I had a solid vision of where I wanted to go with this EP. I didn't want it to be polished. I don't think you want that for a debut, and that's not how the process went. It's all a learning curve. I feel like the EP is more honest because of that."

Honesty is important to Roberts, both in terms of her creativity and also when it comes to self-awareness. She knows that an influencer moving into music will raise some eyebrows. "People are going to have their opinion on it," she shrugs. "I'm cautious of that and I don't want it to come across as another cash grab. It's been a great creative release for me and I hope the songwriting speaks for itself." Besides, music has always been bubbling away in the background of Roberts' life. This isn't a fad.

As a child her house in Leeds reverberated to the sounds of the 80s ("lots of George Michael and Queen"), while Roberts' first idol was Lana Del Rey. "I feel like her music is so emotionally connecting," she says. "Even though at the time I obviously couldn't relate to what she was singing about, her storytelling is really beautiful." Armed just with a plastic keyboard and mic, Roberts would make up songs with her cousin, sometimes performing them for family members. In general, though, the Roberts house was a place for unbridled creativity more generally. "I grew up with my parents just letting me and my sister do whatever we want," she laughs. "Like make the house a mess, just go for it, do whatever makes you happy." At school she chose to focus on art, which in turn led to makeup and her dazzling creations that she'd often share with like-minded friends online. "I didn't feel like I could relate to many people growing up around me. I was the nerdy art kid in the classroom every break time. Social media allowed me to make friends with people with similar interests, especially TikTok which is an outlet artistically but also fundamentally it's centred so much around music."

While she continued to write lyrics and prose down in diaries and notes on her phone, music was gently pushed aside as her art and makeup career took off. "I dedicated more time to doing that because people were responding to it," she explains. "I never had the time in the beginning to dedicate to music. Or the resources to. I didn't know anyone who had a background in music." It wasn't until a couple of years ago, as Roberts started to become creatively restless, that she returned to music properly. "I felt like I achieved everything I wanted to achieve with my makeup and got to such a position online that I was like 'I'd love to do something that challenges me more.' Music was always that thing I wanted to explore. I had always been singing in my bedroom and my parents always said I was a good singer but I was like 'no I'm shy,'" she laughs. "I didn't have the confidence to sing in front of anyone. It took me a while to get there." A lack of confidence may seem weird coming from someone with such a huge following and someone who has been celebrated by everyone from Vogue to the BBC (this year she appeared as a guest judge on reality competition Glow Up). "I think singing is so vulnerable. You're really putting yourself out there. If there are any imperfections with it, everyone has an opinion on it. Especially online when you're starting something new. I was very cautious of not posting anything until I'm truly confident in myself. I've grown so much over the past few years."

Music also allowed her to focus on a different side of her artistic expression. "I feel like with art there's only so much you can say through visuals, which is why I've found music such a great emotional release and almost therapeutic." That journey back to her first love was also assisted by lockdown. Keen to contribute more to her burgeoning songwriting sessions with the likes of Matias Téllez (Girl In Red, Boy Pablo), Noah Terefe (Finn Foxell, HRVY) and Rob Milton (Easylife, Holly Humberstone) she started to learn the guitar. She also threw herself into songwriting, learning how to channel the paragraphs of emotional bloodletting she'd put in her notes app on her phone into fully formed songs. "I think in the beginning I was just like where do you even begin?" she smiles. "Writing stuff as a kid is so different to writing something you want to put out there and have the world here. I had to learn what I wanted to communicate and also the best way to do it in the most authentic and genuine way."

Those two things are evident on the songs on her debut EP, with each of them a snapshot of her emotional state at the time. The gorgeously crumpled, twisted love song Pink Champagne focuses on previous relationships that "didn't end very well to say the least." Rather than channel that into a forlorn love song or a big ballad, Roberts created something "more positive as a way of looking back on these relationships that "weren't always perfect and maybe you're not supposed to get back together." Musically it sweetens any bitterness with a lovely alt-pop confection, all gliding melodies and Roberts' delicate vocals. The excellently-titled, widescreen anthem Paramaniac (a real word meaning someone who complains a lot, used here knowingly and ironically), which recalls Celebrity Skin-era Hole and nods to the widescreen pop of Olivia Rodrigo, zooms in on Roberts' body confidence issues, something that's often compounded by her status as nearly permanently online. "My body image is something I've spoken about before, in the way you can compare yourself to other people. It's such a common thing a lot of teenage girls go through, and I'm no different." Here it's tackled head on with both power and wit. Then there's the gorgeous Band Aid, Roberts' favourite song. Written about her best friend who was suffering with her mental health, it's a warm hug of a song built around a slowly unfurling chorus that pleads "I wish that I could hold you, because I would try and console you."

It's the perfect example of Abby Roberts' songwriting and the aim of her music overall. These are songs that work as a creative outlet for Roberts herself but also as balms for the listener. This is big pop music that's been scuffed up, full of perfectly imperfect songs that deal with big emotions but in ways that feel instantly relatable. For Roberts, music is an extension of who she is, regardless of the labels applied to what she's done so far. "I think everyone seems to think it's TikTokker, make-up artist and now musician but it's not that," she says. "Music is an extension of who I am as a creative." She pauses. "It's just another branch of what I can do." The sky's the limit.